Sound Healing – Mystical Woowoo or the Next Best Healing Modality? 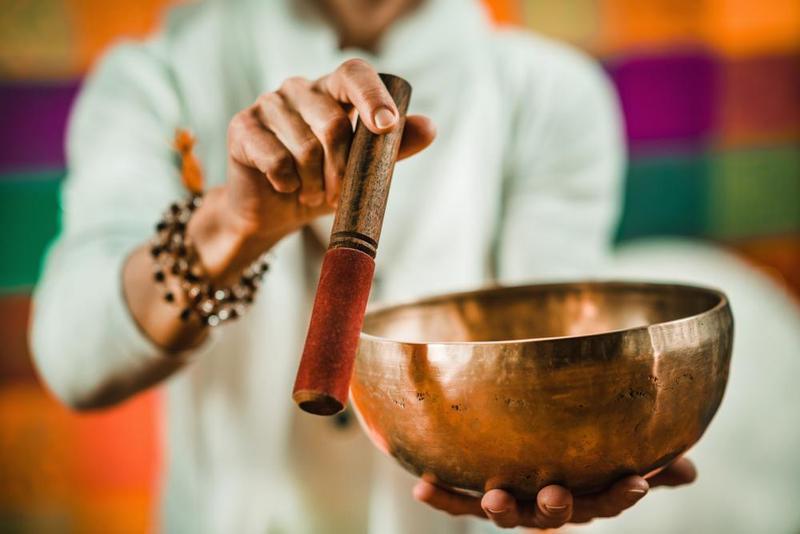 Sound healing and the Law of Attraction

Did you know sound healing and the Law of Attraction are closely related?

Both are often portrayed as supernatural healing modalities steeped in cosmic mystery. Where the so-called “universe” itself will impart some sort of inexplicable power upon you if only you believe. Then as if by magic all your ailments will disappear and everything you’ve ever wanted will be yours for the taking.

Here’s the thing . . . the above explanation isn’t entirely accurate. There’s actually nothing mystical or other-worldly about these practices whatsoever.

Here I demystify what sound healing (and by extension the Law of Attraction) really is and if either of these ancient concepts actually work.

The power of sound

At the core of all matter exists vibration. Everything in nature, from rain to rocks to plants, animals, and even the human body, consists of electromagnetic frequencies. (A frequency is a measured point of vibration or energy.)

When functioning properly within the body, these frequencies act like a well-tuned orchestra that “plays” with ease. However, when dis-ease or toxicity forms in the body, an imbalance is created within our cells whereby they no longer vibrate at a natural, healthy frequency.

Cell vibration has been shown in research by Dr. James Gimzewski of UCLA California which he has named “sonocytology.” Dr. Gimzewski used an atomic force microscope to “listen” to the sounds emitted by cells. This new science maps the pulsations of the cell’s outer membrane thereby identifying the “song” of the cell. This research points to evidence that every cell of the human body has a unique song and “sings” to its neighbors.

Have you ever noticed that when you continually have a negative thought and especially when you verbalize this, you usually experience exactly what you’re thinking?

I’ll give you an example, let’s say you’re often fixing and replacing items in your home. You think about this problem constantly and begin to verbalize your frustration, “This house is falling apart!” or “Something ALWAYS needs fixing around here!”

Or take the example of what we may say to ourselves or the people closest to us, “I have no willpower. Why can’t I just control myself and eat right?” or “What is wrong with you? You’re always [fill in the blank]!”

Rather than changing the situation for the better, these negative thoughts and words impact us not only on an emotional level but can also affect the physical world around us. Much of what we regularly think and say becomes a self-fulfilling prophecy. How?

No, it’s probably not that the mysterious “universe” heard us ? But other things certainly did. As a form of sound, spoken words emit a frequency.

Frequency effects matter and water is matter. Water is a fantastic conductor of frequencies.

Think of the implications this can have on the human body. Our bodies are made up of 60-70% water. In addition to their psychological power, thoughts and words can have a real physical impact on the human body (for better or worse) via their frequencies.

Sound healing in it’s most simple form starts with controlling the frequency of our thoughts and words.

Vibrational frequencies respond to one another and can be transmitted or received when they match or have a harmonic likeness. This is called sympathetic resonance. If you’ve ever listened to someone and said, “I feel you” or “That really resonates with me,” you’ve experienced this.

Like a magnet, good vibrations attract while negative vibrations repel and there is no connection.

Sound and light frequencies for healing

The human ear can only perceive a fraction of the frequency range, from 20 Hz to 20,000 Hz, or approximately 10 octaves. Compared to animals our hearing is pretty limited. Whales, dolphins, and bats are capable of 100,000+ Hz, while moles and elephants can hear below the human range of 20 Hz. Fortunately, there are still frequencies in our range that can produce profound healing effects!

Light also has frequencies, reaching even higher than the realm of sound. Just as each time an octave of music is raised the “hue” is changed but not the note, when “octaves” of light are changed the hue also changes. As each octave of light is raised, the color lightens until it eventually becomes white.

The frequencies 396, 417, 528, 639, 741, and 852 Hz have been shown to have different characteristics that can be seen, heard and felt. They also show a commonality in the form of the skein of Pythagoros as follows:

The above frequencies, also called Solfeggio tones, are firmly rooted in ancient hymns and songs penned by King David and others of his time. These later became the inspiration for the Gregorian chants of the Catholic Church (although the original Solfeggios were badly altered by Pope Gregory the Great around 590 AD). These had no musical notations as we have today but instead were performed by interval sight singing (or “solfege”).

These tones form beautiful water crystals and also affect the human body in numerous positive ways. [You can read more about this in the book Healing Codes for the Biological Apocalypse by Dr. Leonard Horowitz and Joseph S. Puleo]

Nikola Tesla, the brilliant Serbian-American inventor, engineer, and physicist stated, “If you only knew the magnificence of the 3, 6 and 9 then you would have the key to the universe.”

We now understand that sound healing is based in scientific principals since frequency effects matter. Following this line of evidence an explanation of the healing power of sound can be found.

When a cell is damaged, toxic or sick, it moves into a hibernation known as the G0 phase. During this phase, the cell is essentially “sleeping,” and not replicating as normal. Moving the cell back into a normal cycle usually requires adequate rest, nutrition or both. However, another method has been found – sound healing!

On the surface of most cells are projections known as Integral Membrane Proteins (IMPs). These antennae-like structures are responsible for various functions such as transporting food or waste. One class of IMPs, the Primary Cilia, respond to infrared light and certain frequencies of sound. This is similar to tuning forks that have a particular resonant frequency and respond only to that specific frequency.

When the correct frequencies (such as the ones mentioned above) are played for sick cells it can energize them and move them back into a G1 phase where they will once again prepare for replication and renewal. This imprinting of a cymatic pattern on cells provides sonic nourishment causing its frequencies to return to normal.

As a child recovering from a near-death auto accident, I recall wanting to listen to songs from The Phantom of the Opera over and over in my hospital bed. Who knows, maybe those compositions play at some of the healing frequencies!

How to use sound healing

As I mentioned earlier, our first step (but possibly the most important step) in using sound healing in our personal holistic health journey is to simply monitor the frequencies of our thoughts and words. How do we talk to ourselves internally? What words and emotions do we most often use when speaking with our families, friends and the public? Remember, like attracts like. What we project into the world is usually exactly what we get back.

Another beautiful healing tool we can use to “cleanse” our minds of negative thinking patterns and limiting beliefs is EFT or “tapping”.

Traditionally, instruments such as the harp, gong, Tibetan bowls, and crystal bowls have been used in sound healing. These produce full-bodied and rich sounds that provide wonderful sonic nourishment for our cells. In addition, many modern recordings of beautiful music tuned to these healing frequencies are available for purchase (as well as many free versions on YouTube!).

Using sound healing in our everyday lives couldn’t be simpler – find a musical recording that uses these frequencies and listen up! Even if you don’t have an out of this world healing experience, I guarantee you’ll feel more relaxed and peaceful.