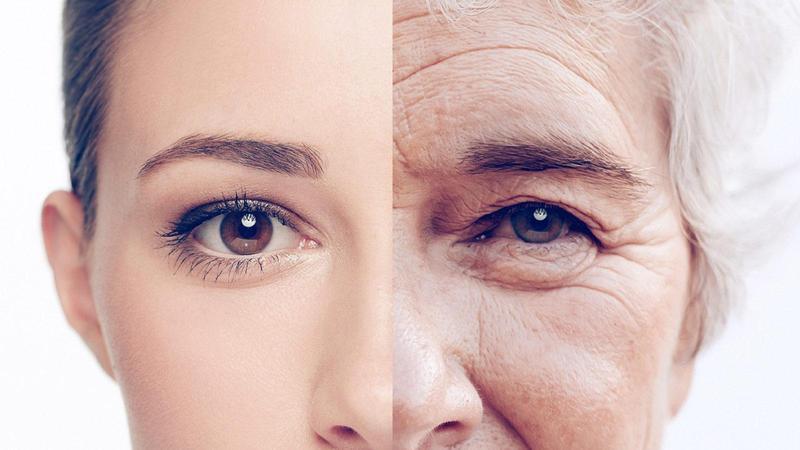 Why does one person bask in the sunshine of amazing health, while another looks old before her time? People have been asking this question for many years, and recently, it’s becoming clearer and clearer to researchers that the differences between people’s speed of aging lie in the complex interactions among genes, social relationships, environments and lifestyles. While you are born with a certain combination of genes, the way you live affects how they express themselves anyway. Some lifestyle factors might even turn genes on or shut them down. Deep inside the genetic core of all our cells are telomeres, or repeating segments of noncoding DNA that live at the ends of the chromosomes. They form caps at the ends of the chromosomes and keep the genetic material from unraveling. They shorten when cells divide and help determine how fast a cell ages. When they are too short, the cell doesn't divide anymore. This isn’t the only reason a cell can become senescent — there are other stresses on cells that are not yet researched very well — but short telomeres make cells grow old. Blackburn and Epel devoted most of their careers to researching telomeres, and one groundbreaking discovery from their labs (and seen at other labs) is that telomeres can actually lengthen. Growing old is a dynamic process that could possibly be accelerated or slowed — and, in some aspects, even reversed. What has surprised them and the rest of the scientific community is that telomeres do not simply carry out the commands sent by your genetic code. Your telomeres are listening to you. What you eat, how you respond to challenges, how much physical activity you undertake, and many other factors appear to influence your telomeres and can prevent premature aging at the cellular level. One of the keys to having good health is simply doing your part to help healthy cell renewal.

'People who score high on measures of cynical hostility have shorter telomeres'.

Scientists learned that some thought patterns are bad for telomeres, and one of them is cynical hostility. Cynical hostility is basically high anger and frequent thoughts that other people cannot be trusted. Someone with hostility doesn’t just think that they don't like to wait in queue in a shop; they contemplate about how other people in the store sped up on purpose to be first in line. People who score high on measures of cynical hostility get more cardiovascular disease, metabolic disease and frequently die at younger ages. They also have shorter telomeres. In a research of British civil servants, men whose cynical hostility scores were high had shorter telomeres than men who scored low. The most hostile men were 30 percent more likely to have a both short telomeres and high telomerase (an enzyme in cells that helps keep telomeres in good state) — a profile that seems to reflect the unsuccessful attempts of telomerase to protect telomeres when they are too short. These men had an unhealthy response to stress. Ideally, your body responds to stress with a boost of cortisol and blood pressure, followed by a fastreturn to normal levels. Instead, when these men were experiencing stress, their diastolic blood pressure and cortisol levels were blunted, a sign their stress response was, basically, broken from overuse. Their systolic blood pressure increased, but instead of returning to ordinary levels, it stayed elevated for a long time afterward.

The hostile men also had fewer social connections and were less optimistic. In terms of their physical and psychosocial health, they were very vulnerable to an early disease-span, the years in a human’s life marked by the ailments of aging, that include cardiovascular disease, arthritis, a weakened immune system and others. Women usually have lower hostility, and it’s less related to heart disease for them, but there are other psychological culprits affecting women’s health, such as depression.

'When you ruminate, stress sticks around in the body long after the reason for the stress is over'.

Pessimism is the second way of thinking that has been found to have negative effects on telomeres. When the scientists carried out a research on pessimism and telomere length, they learned that people with high level of pessimism had shorter telomeres. This was a small study of about 35 women, but similar results have been found in other studies, including a research of over a thousand men. It also fits with a large body of evidence that pessimism is a risk factor for bad health. When pessimists develop an aging-related illness, like cancer or heart disease, the illness tends to progress quicker. Like cynically hostile people — and people with short telomeres, in general — they tend to die at a younger age.

Rumination — the act of thinking about the same problems over and over — is the third destructive thought pattern. How do you separate rumination from just reflection? Reflection is the natural, introspective analysis about why things happen the way they do. It may cause you some healthy discomfort, but rumination feels terrible. It never leads to a solution, only to more ruminating. When you ruminate, stress is maintained in the body long after the reason for it is gone, in the form of prolonged high blood pressure, elevated heart rate, and increased levels of cortisol. Your vagus nerve, that helps you feel calm and keeps your heart and digestive system steady, stops working — and remains withdrawn long after the stressor is gone.

In a study, the scientists looked into daily stress responses in healthy women who were family caregivers. The more they ruminated after a stressful event, the lower the telomerase in their aging CD8 cells (the crucial immune cells that send out proinflammatory signals when they are damaged). People who ruminate experience more depression and anxiety, which are, in turn, connected with shorter telomeres.

The fourth thought pattern is thought suppression, the attempt to push away undesired thoughts and feelings. Daniel Wegener, a Harvard social psychologist, once came across this line from the great nineteenth-century Russian writer Fyodor Dostoevsky: “Try to pose for yourself this task: not to think of a polar bear, and you will see that the cursed thing will come to mind every minute.” Wegener tested this idea by carrying out experiments and identified a phenomenon he named ironic error, meaning that the more forcefully you push your thoughts away, the louder they call out for your attention. Ironic error might also be distructive to telomeres. If we try to manage stressful thoughts by sinking the bad thoughts into the deepest waters of our subconscious, it can backfire. The chronically stressed brain’s resources are already taxed — we call this cognitive load — making it even harder to successfully suppress thoughts. Instead of less stress, we get more. In a small research, greater avoidance of negative feelings and thoughts was associated with shorter telomeres. Avoidance alone is probably not enough to harm telomeres, but it can lead to chronic stress arousal and depression, both of which may shorten your telomeres.

Thought awareness can promote stress resilience. With time, you learn to encounter ruminations and say, “That’s just a thought.”

The last thought pattern is mind wandering. Harvard psychologists Matthew Killingsworth (TED Talk: Want to be happier? Stay in the moment) and Daniel Gilbert (TED Talk: The surprising science of happiness) used a “track your happiness” iPhone app to ask thousands of people questions about what they are doing, what their minds are doing, and how happy they are. Killingsworth and Gilbert found that we spend half of the day thinking about something other than what we’re doing. They also demonstrated that when people are not thinking about what they’re doing, they’re not as happy as when they’re engaged. In particular, negative mind wandering — thinking negative thoughts, or wishing you were somewhere else — was more likely to cause unhappiness in their next moments.

The negative thought patterns are automatic, exaggerated and controlling. They take over your mind; it’s as if they tie a blindfold around your brain so you can’t see what is really going on around you. But when you become more aware of your thoughts, you take off the blindfold. You won’t necessarily stop the thoughts, but you have more clarity and control. Activities that help increase thought awareness include most types of meditation, along with most forms of mind-body exercises, and long-distance running. Thought awareness can promote stress resilience. With time, you learn to encounter your own ruminations or problematic thoughts and say, “That’s just a thought. It’ll fade.” That is a secret about the human mind: We don’t need to believe everything our thoughts tell us. Or, as the bumper sticker says, “Don’t believe everything you think.”