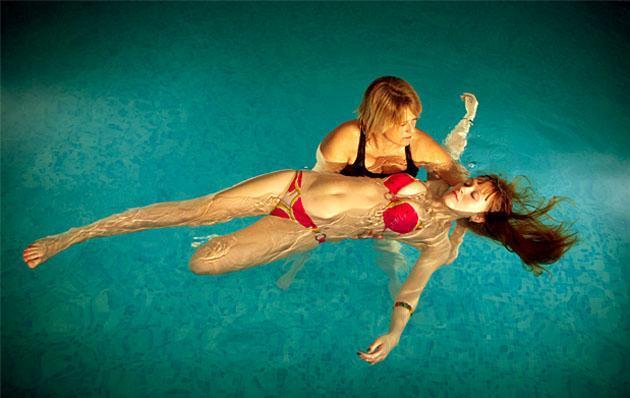 Forget rebirthing. A session of watsu took me straight back to the womb and I never wanted to leave.

The water therapy stems from Zen shiatsu and is done in a heated saltwater pool at SunWater Spa in Manitou Springs.

As SunWater's lead aquatic therapist Mitzi Pasternak stood in the pool, I lay my head back on her upper arm, closed my eyes and let my body float to the surface. For about 45 minutes she guided me around the pool, gently moving my arms and legs in watsu sequences. One at a time she moved my arms overhead and stretched the side of my body. And then she'd hold one of my thighs, turn me slightly on my side and pull me in a circle through the water. Total mermaid effect.

Around the pool she pulled and pushed me, swirling in one direction and then the next. And amazingly she didn't let me get water in my nose once. She was able to use either her body or her hands as a comfortable pillow to support my head in every position. My ears were mostly underwater the whole time, which led to a few moments of worry I'd have water in my ears all night. Didn't happen. In fact, it became a delicious sensation to have my ears buried underwater. By dulling the sounds from the outside world, I was able to get deeper into the floating meditation. It seemed similar to what one might experience in a flotation tank.

"A lot of people find, when it's hard to stop the mind from chattering, there's something about being in water," said Pasternak, "and the sensation of yourself being moved through the water, as well as being really close to another person."

I returned to the proverbial womb later in the session when she maneuvered me again onto my side and pulled my knees up toward my chest. She pulled me in toward her and I floated in a comforting fetal position.

I didn't want the watsu to end, but eventually Pasternak pulled me to the pool wall and pressed me into an imaginary chair sitting up against it. She made sure my feet were flat on the ground and gently pushed down on my shoulders - ideal for grounding somebody after an intense bodywork session that can leave you spacy and off-center.

Watsu is the baby of Harold Dull, who studied Zen shiatsu, a form of Japanese bodywork, with a master in Japan. In the bodywork practitioners use their fingers, thumbs and palms to massage a client and assist them in stretching and joint manipulation and mobilization.

He took those techniques back to the United States and began to play with them in water. Watsu, which means water shiatsu, was born in 1980. It must be done in water about 95-97 degrees - slightly higher than the usual 94 degrees of the skin - so the client doesn't get overheated or chilled.

The treatment helps flush the lymph in the body and also rebalances the autonomic nervous system. It's also great for respiration and circulation, Pasternak said.

The gentle therapy is ideal for most people, including kids, seniors and pregnant women, and excellent for those dealing with sleep disorders and different kinds of pain, including arthritis and fibromyalgia. Those who can't get water in their ears or have serious, uncontrollable motion sickness or vertigo shouldn't attempt the therapy if they're experiencing symptoms.

And beyond the physical benefits, there are also the mental and emotional ones.

"Sometimes you hear your own heartbeat or their (the therapist's) heartbeat," said Pasternak. "You hear yourself breathing more when your ears are underwater, too, and all of that helps distract the mind as well. A lot of people feel so relaxed and comforted and cared for in a way they've never had before."

by Jane Mulson For The Gazette