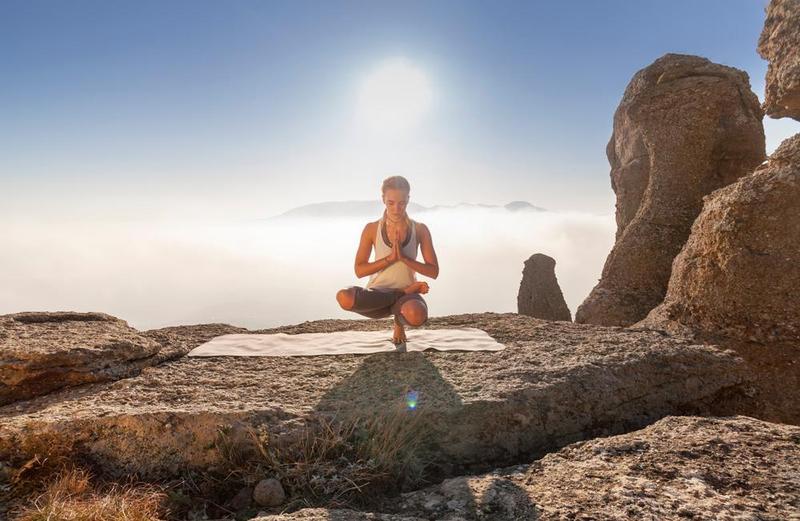 Alternative therapies meant to help us "break the train of everyday thinking" have effects on a cellular level.

The flight or fight response — the natural response to stress — essentially puts the nervous system in overdrive. So it's no surprise that its opposite state, known as the relaxation response to stress, is associated with feeling good, in a general sense. People are able to evoke the relaxation response by repeating a yoga pose, prayer, or mantra while disregarding other thoughts, and it's been shown to protect against psychological disorders like anxiety and depression as well as physical conditions like hypertension, cardiovascular disease, and types of cancer that are exacerbated by stress.

People who practice simple meditation aren't "just relaxing" — they affect the body on a cellular level.

Researchers at the Benson-Henry Institute for Mind/Body Medicine at Massachusetts General Hospital and Beth Israel Deaconess Medical Center Subjects trained 26 adults with no prior experience in this type of meditation for eight weeks. They practiced deep breathing, repeated mantras, and learned to ignore intrusive thoughts. Initially, they were given blood tests immediately before and 15 minutes after listening to a 20-minute health education CD. This was repeated after their training, only with a CD that guided them in their meditation. Twenty-five other participants, who had long-term experience in evoking the relaxation response, were tested as well.

All of the subjects' blood samples revealed changes in gene expression following meditation. The changes were the exact opposite of what occurs during flight or fight: genes associated with energy metabolism, mitochondrial function, insulin secretion, and telomere maintenance were turned on, while those involved in inflammation were turned off. These effects were more pronounced and consistent for long-term practitioners.

People who practice simple meditation aren't "just relaxing," explained the study's senior author, Dr. Herbert Benson (he of the aforementioned institute). Instead, they're experiencing "a specific genomic response that counteracts the harmful genomic effects of stress." While this study only looked at one way of reaching this state, people have been figuring this out for themselves for thousands of years, through yoga, prayer, and other forms of meditation. Yet this is the first time researchers have been able to use basic science to show that these practices actually have an observable, biological effect. It's only gene expression that is altered, not the genes themselves. But these results also showed that the effects of the relaxation response become stronger with practice, typically twice a day for 10 to 20 minutes. Fortunately it's not hard to learn — in what was perhaps the most pleasant turn an interview has ever taken, Benson guided me through a meditation session. "Do it for years," said Benson, "and then these effects are quite powerful in how they change your gene activity."
"Relaxation Response Induces Temporal Transcriptome Changes in Energy Metabolism, Insulin Secretion and Inflammatory Pathways"
is published in PLOS ONE.
Recommended Articles
Related Articles
ERROR - Carousel is empty!
View All