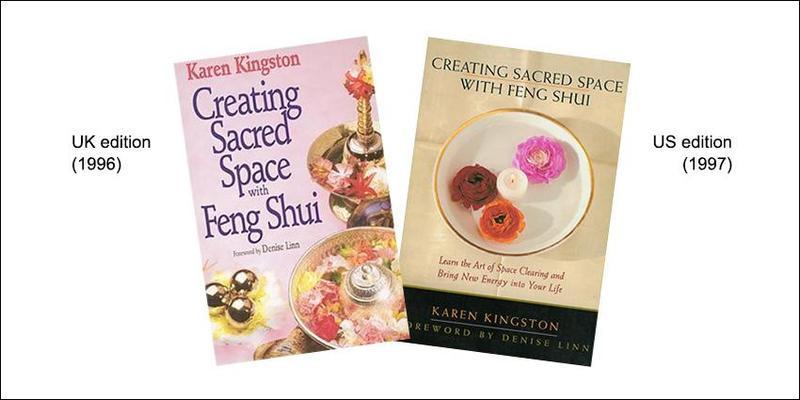 I’m writing a new space clearing book at the moment and a question I keep getting asked is this:

I just purchased your book, Creating Sacred Space with Feng Shui, and I see you have stated on your blog how outdated it is. Are you saying the techniques are no longer of value?

The basic steps of the space clearing ceremony described in my first book are still valid.

Creating Sacred Space with Feng Shui was written in 1995 and published in 1996. It became one of the bestselling Mind Body Spirit titles at many bookstores around the world in the following years and sold over a million copies in 16 languages.

My next book, Clear Your Clutter with Feng Shui was published two years later in 1998. It has sold over 2 million copies in 26 languages and continues to sell well to this day.

Both books have become “must read” classics in their respective fields.

Clear Your Clutter with Feng Shui has been regularly updated and revised and is now in its fourth edition. But when I attempted to do the same with Creating Sacred Space with Feng Shui, I quickly realized it wouldn’t work. My space clearing knowledge and skills have moved on so much since that book was written that an entire rewrite is needed.

When I first started teaching space clearing to public audiences in 1993, I could cover everything I knew in the space of a one-day workshop. By the time I wrote Creating Sacred Space with Feng Shui in 1995, I knew enough to teach on the subject for about two weeks. Today, Richard and I could teach a professional space clearing practitioner training for over a year without running out of material. The depth and scope of our knowledge and skills has developed beyond anything I would ever have believed possible when I first started pioneering this work.

The basic steps of the space clearing ceremony described in Creating Sacred Space with Feng Shui are still valid but the explanations about them are now very out-of-date and no longer reflect how we do the ceremony ourselves or teach other people how to do it. The new book will explain much more about how space clearing works, when to do it, when not to do it, who can do it, who can’t do it, and everything that people need to understand in order to do effective space clearing in their own home themselves.

It will also include some elements that I left out of the first book because I didn’t know how to explain them at the time and now do. And it will exclude (and explain why) some techniques from the first book that are now redundant (salt and incense, for example).

There will be more information about the origins of space clearing, including a more detailed description of how I pioneered it and the developments that have taken place since 2004, when I was joined in the work by my husband, Richard Sebok. And the new book will give me the opportunity to correct things such as the strange example of a flower offering you can see at this top of this article, pictured on the front cover of the US edition of the book (I was not consulted about this image and cringe every time I see it).

I’m happy to say that Clear Your Clutter with Feng Shui has stood the test of time, but Creating Sacred Space with Feng Shui needs to be left now to go out of print and be replaced by the new book that Richard and I are writing together, which we intend will become the go-to guide for twenty-first century space clearing.

When will the new book be published?

The publication date will be announced after I’ve finished writing the book and announcements will be made on my website and blog. If you’d like to be notified by email, the best way to request this is to sign up to receive my free monthly newsletters.

Is it OK to space clear using the information in the old book until the new one is available?

Yes. The essence of the basic steps of the ceremony described in Chapters 6 and 7 of Creating Sacred Space with Feng Shui is still the same. But when you read the new book, it will be very clear why such a major update and rewrite is needed. There is so much more to space clearing than I was able to convey in the first book. The new one will help people to go much deeper and obtain substantially better results.

Subscribe to my newsletters to receive news, articles and information about upcoming online courses by email. And I promise you – no junk mail ever.