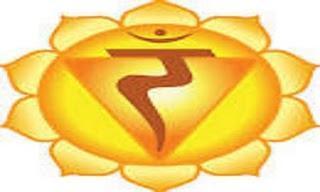 Solar plexus chakra lies in the solar plexus region above our naval center in our body. In the gland system it is interrelated to Adrenal gland. According to Dr. Richard Restak clinical professor of Neurology at the George Washington University America, this gland plays an important role not only in controlling our body function but our thought and thinking process also. Adrenal gland is interrelated to Solar Plexus chakra (in Hindi Manipur Chakra) or yellow chakra or third chakra. In the process of Kundalini awakening too special significance is given on solar plexus chakra. It is also referred as will power center. And play a very important role in obtaining effective, powerful and dynamic personality. There are many healing Meditations and techniques available by which the energy of week and impaired solar plexus chakra can be tuned, Like yoga, asanas and energy healing. By using any one of these, energy of week and unbalance chakra can be tuned. But prior to this important task is to identify the energy imbalance in solar plexus chakra.

Solar plexus chakra also plays an important role in our digestive system, his main work is to help our digestive system to convert whatever we intake into usable energy. Whatever we intake in our body whether food or any idea, it converts into usable energy. The more powerful and efficiently our solar plexus chakra works, the more balance, efficient and socially dominating life we lives. Solar plexus chakra defines our personality.it defines our powers which are essential to live a successful life. According to ‘Kundalini chakra system’ our solar plexus chakra also controls our will power. Therefore also known as will power center. His Proper, balanced and efficient working is almost essential to have a Calm, happy and satisfying life. The person having balance and strong solar plexus chakra have almost negligible amount of confusion as well as indecision situation in their life. They are very clear and poise regarding their decisions and choices. They very successfully maintains themselves, circumstances, situations and habits in their life, all are well and efficiently organized and successfully maintain them in set boundaries. Life is very enjoying and purposeful for them. It seems they are enjoying life to the fullest. Their viewpoints and thinking are based on firm foundation of belief and knowledge and put them in front of others without any confusion and fear and also try to convince them. Strong energy of solar plexus chakra provides them necessary support and energy to have firm actions, viewpoints and decisions. Their attitude and behavior are very firm and remain on their point’s even in opposite and unfavorable conditions.

When solar plexus chakra becames unbalanced and unstable then it becomes difficult to manage and control desires, emotions and things in life. When energy of solar plexus chakra gets impaired, one starts to excessively indulge in things and find it difficult to control and manage them. Weather it is habit of smoking, drinking or something surprising like habit or thrust to eat paper, all are difficult to control and manage. Alcohol abuse, excessive smoking and other similar things all are result of impairment in Solar Plexus chakra energy. Impairment in solar plexus energy makes life really hell and one runs unconsciously towards the materialization of his desires and wishes. An internal anxiety develops in him and forced him to get fulfilled like something has become empty in him. This always makes him unrelaxed and forced him to do all works and those actions by which he get relaxation but subjugated by his previous actions and habits he performs all those works and actions which should be avoided by him.

The deficiency of energy in solar plexus chakra is also reflected in their life style. The deficiency of energy in solar plexus chakra makes one meek and sheepish person. This type of behavior makes simple and ineffective personality. These type of people are very easily dominated by their Friends, family and even unknown’s, they forcefully changed their decisions according to their desires. They are always internally afraid to take the decisions and find it difficult to proof their ideas and thinking in front of others. Their meek behavior and attitude stops them to show their full potential. Their life is very much unorganized and joyless, face difficulty in maintaining and completing the daily activities. They procrastinate their work and complete or accomplish them at last moment.

On the other hand excess of energy in solar plexus chakra increases anger, rage, bitterness and irritability. Which directly effects and hamper personal relations with the world and people around. Bitterness in behavior makes difficult to maintain relations and get involved with the friends, neighbors, and people around. They also get hurted very easily by others behavior. They became very sensitive. They sees every relationship in only two perspective either yes or no. It becomes very difficult to maintain relations and friendships with these persons. Because they directly break the relationships if they found something uncomfortable, annoying or unresentful. They don’t believe in second chance. These people lives stressful, anger, unstable and unbalance life.

Reasons for the distortion of Solar plexus chakra Energy

There are many techniques by which you can tune the energy of Manipur Chakra. Yoga and asana are one of these which can tune the energy of your Manipur chakra. Contrast to these there are some hidden techniques also which can be performed without doing any physical activity. These are very helpful for all those who don’t want to perform any physical activity. One of such technique is energizing your chakras by different colour energies. Here we use the different colour energies like light green, light blue, Red & violet colour to energies our solar plexus chakra. This technique is very simple and anybody can perform it. While sitting in the comfort of your room or in some airy and open place, anywhere, it can be performed. In this technique you have to sit down in your favorite posture and request the super natural powers to strewing the light blue and violet colour energy on solar plexus chakra. To gain stability and better energizing the solar plexus chakra you can count up to 100 while energizing solar plexus chakra. To have a full details you can contact us also.