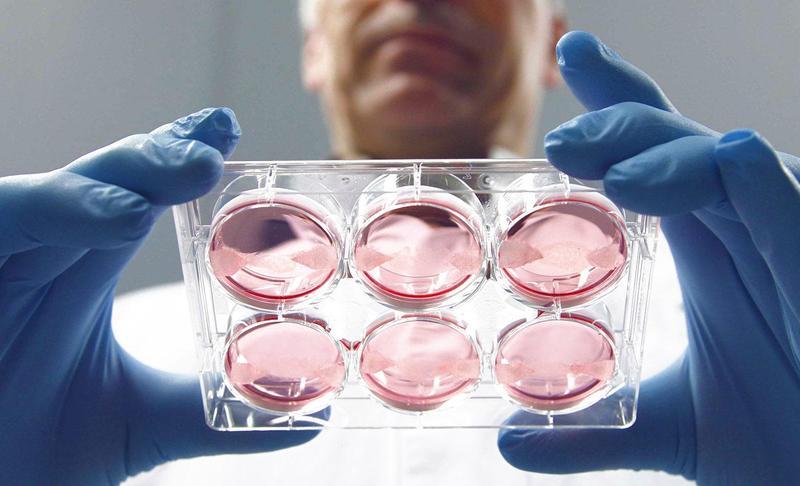 Jason Matheny can. He’s not only a vegetarian, he’s a doctoral student and scientist at the University of Maryland in College Park, and he’s committed to changing the way meat gets to the dinner table. Last July, he and an international team of researchers announced a new method for “making” meat. Instead of slaughtering farm animals, they’re growing meat in the laboratory. “In theory, technology could produce the world’s entire supply of meat without ever killing a single animal,” says Matheny.

The technique involves a relatively painless process of removing muscle cells from a live animal through a thin needle, then letting the cells grow and divide in a sort of giant petri dish—a vat kept at the same temperature as the animal’s body and filled with glucose, amino acids and minerals. This nutritional soup is then poured onto large plastic sheets that are continually stretched to “exercise” the cells and keep them growing. After a few weeks, a millimeter-thick sheet of meat can be peeled off, rolled up and minced into hamburger.

“There are all sorts of ethical and health advantages to this technology,” Matheny says. “First, no animals have to be killed. In theory, we could collect cells from one of every type of animal now raised for food, rather than slaughtering 40 billion creatures each year.” Reducing the number of factory farm animals would also mean a tremendous reduction in land and water pollution caused by animal waste. According to the Department of Agriculture, food animals currently produce 1.6 billion tons of manure each year.

Vat-grown meat would also be safer and more healthful than today’s meat, Matheny says. “There are so many health problems associated with farmed meat. In addition to worrying about antibiotics, steroids and contamination, meat has a very high saturated fat content. But with tissue culture, we can reduce that or even replace it with a healthier fat,” he says. And people wouldn’t have to worry about mad cow disease or avian flu.

Is lab-grown meat too weird or too sci-fi to ever become marketable? The Dutch don’t think so. They’ve invested nearly $5 million in research to cultivate pork from stem cells. The lead researcher, Henk Haagsman, PhD, a scientist at the University of Utrecht, believes they could have a ground meat product in as little as six years.

“Of course there are people who think this is Frankenstein food,” says Vladimir Mironov, MD, PhD, director of the Medical University of South Carolina Shared Tissue Engineering Laboratory in Charleston. “They see it as unnatural, but there is nothing unnatural here. We use animal cells and grow them in a cultured media. The only difference is that we don’t kill any animals.

Matheny takes it a step further.

“We’ve already accepted plenty of bioengineered foods, such as wine, cheese, tofu and tempeh. None of them are found in nature.”

Also, contrary to what some might think, the process is completely different from cloning. “The kind of cell replication taking place is the same kind that occurs in our muscles when we exercise,” explains Matheny. “Cloning, on the other hand, involves reproducing an entire animal from a germ line cell, which is a highly artificial process.”

Even so, how realistic is this brave new world of murderless meat outside of The Netherlands? “If there is demand, it can be available and on the market in the next five to 10 years,” says Mironov. In fact, he sees a future where people will have countertop devices similar to breadmakers that could produce meat overnight. “It’s not a question of time, it’s a question of money. With a well-funded program, this could become a reality in the next decade,” he says. Cost is one of the biggest stumbling blocks. Scientists have yet to figure out how to get cells to proliferate inexpensively enough for lab-grown meat to be mass-produced and economical.

“Just like any new technology, it will be very, very expensive to produce at first,” says Mironov, “at least $5,000 per pound. But eventually, the price will go down dramatically—1,000 times. The Dutch wouldn’t be forging ahead if they didn’t believe that. Besides, they recognize that they don’t have enough land and they’re very concerned about the environment. They want to lead the way in this technology.”

What will vegetarians do?

Not surprisingly, animal rights activists and vegetarians support the idea of murderless meat. “This is one of the most exciting developments ever,” says Ingrid Newkirk, president of People for the Ethical Treatment of Animals (PETA), the world’s largest animal rights organization. “It removes the suffering of billions of animals and still gives people the opportunity to eat what they want, minus the cruelty.”

“While most vegetarians wouldn’t consider going back to eating meat no matter how it was produced, many of them think this is a good idea for nonvegetarians”

“Meat is not a necessary or healthy food. We don’t need to eat it,” says Amy Lanou, PhD, senior nutrition scientist for the Physicians Committee for Responsible Medicine in Washington, DC. “If we as a country don’t take the big steps in avoiding animal-based foods, we are not going to see healthier people or a decline in chronic diseases.”

There are other key things to consider, says Gregory Jaffe, director of biotechnology at the Center for Science in the Public Interest, a food-safety advocacy group in Washington, DC, “including safety, nutrition, cost, taste and ultimately our culture and our connection to food. Even though we often eat highly processed foods—far removed from what’s grown in a field or produced on a farm—the bottom line will be whether people actually want to buy meat that’s grown in a vat. I don’t know if they will.”

via The Vegetarian Times