How Chinese medicine could fix slumped spines of smartphone generation 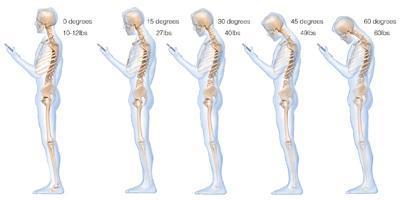 Traditional Chinese medicine could hold the key to treating an increasing number of children and teenagers with abnormally curved spines in a city increasingly populated by “smartphone zombies”, according to practitioners.

The condition of a 14-year-old girl diagnosed with adolescent idiopathic scoliosis (AIS), an abnormal curvature of the spine, had significantly improved after two months of a combined treatment of tui na – a type of Chinese massage therapy – acupuncture and daily exercise routines.

Angel Man’s spine, which was curved sideways in an S-shape at an angle of 31 degrees, was corrected to 18 degrees – a condition that only requires regular observation.

Depending on the severity of the curve, scoliosis is conventionally treated by wearing back braces or surgery. Curves over 45 degrees are considered serious and would be recommended surgery.

However, the two traditional methods can only prevent the spine curvature from worsening, and do not correct or straighten the spine completely.

Lam Chung, a Chinese medicine practitioner specialising in AIS, has developed a comprehensive treatment for youngsters living with the condition.

Based on ancient traditional treatment theories and more than 30 years of clinical experience, the chiropractic-like therapy combines massage, acupuncture and a set of 22 different exercise routines that aim to loosen muscle tension, increase blood circulation and realign displaced bones.

Lam said that since 2006, a three-month treatment has shown significant results for over 80 per cent of 100 scoliosis patients aged 10 to 16, with the majority seeing at least three to five degrees of spinal correction.

AIS affects 2 to 3 per cent of children between the ages of 10 and 16 worldwide. A 2008 Health Department survey that screened more than 800,000 students as part of the Student Health Service Programme found that AIS affected up to 4.5 per cent. Scoliosis is about twice more common in girls than boys.

Although AIS has no known cause, bad posture and unhealthy habits are contributing factors.

“Playing electronic games for several hours, slouching, slumping on the sofa or sitting cross-legged can cause your back muscles to tense up and affect a balanced muscle development,” said Lam, who heads the Hong Kong Institute of Chinese Medicine Culture, an association of practitioners.

Prolonged use of mobile phones puts extra strain on the neck and affects healthy development of the spine, Lam said.

He added that it is important for children with scoliosis to find suitable treatment before their bones stop growing.

“It’s a race against time.” said Lam. “If children don’t find the right treatment while they are going through puberty, their condition can worsen in a very short period. We’re talking about an increase of one degree every month.”