Get Grounded! The Most Important Health Discovery of Modern Medicine 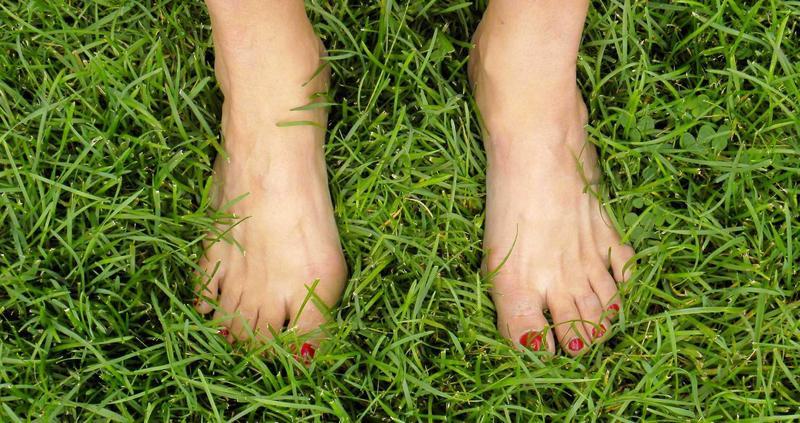 Grounding, or ‘earthing,’ as some people call it, involves placing your feet directly on the ground without shoes or socks as a barrier. The logic behind this practice relates to the intense negative charge carried by the Earth. This charge is electron-rich, theoretically serving as a good supply of antioxidants and free-radical destroying electrons.

Dr. James Oschman, a PhD in biology from the University of Pittsburgh and an expert in the field of energy medicine, notes:

Subjective reports that walking barefoot on the Earth enhances health and provides feelings of well-being can be found in the literature and practices of diverse cultures from around the world. For a variety of reasons, many individuals are reluctant to walk outside barefoot, unless they are on holiday at the beach. (source)

It makes sense if you think about it; in our most natural state, we wouldn’t really be wearing any sort of cover on our feet. Putting your feet on the ground enables you to absorb large amounts of negative electrons through the soles of your feet which, in turn, can help to maintain your body at the same negatively charged electrical potential as the Earth. [amazon template=further reading (single)&asin=1591203740]

A study published a couple of years ago in the
Journal of Environmental and Public Health
titled [amazon asin=1591203740&text=Earthing: Health Implications of Reconnecting the Human Body to the Earth’s Surface Electrons] postulates that earthing could represent a potential treatment/solution to a variety of chronic degenerative diseases. It concluded that simple contact with the Earth, through being either outside barefoot or indoors connected to grounded conductive systems, could serve as a natural and “profoundly effective environmental strategy” against chronic stress, ANS dysfunction, inflammation, pain, poor sleep, disturbed HRV, hyper-coagulable blood, and many common health disorders, including cardiovascular disease. The study concludes:

The research done to date supports the concept that grounding or earthing the human body may be an essential element in the health equation along with sunshine, clean air and water, nutritious food, and physical activity.

These results suggest that earthing during exercise inhibits hepatic protein catabolism or increases renal urea excretion. Earthing during exercise affects protein metabolism, resulting in a positive nitrogen balance. This phenomenon has fundamental importance in understanding human metabolic processes and may have implications in training programs for athletes.

A
study
published last year from the Developmental and Cell Biology Department at the University of California at Irvine found that grounding the human body improves facial blood flow regulation. As mentioned earlier, studies have found grounding to reduce blood viscosity, which is a major factor in cardiovascular disease. One study, published in the Journal of Alternative and Complimentary Medicine, even concluded that earthing may be
“the primary factor regulating the endocrine and nervous system.”
According to a
review
published in the
Journal of Inflammation Research:
Grounding reduces or even prevents the cardinal signs of inflammation following injury: redness, heat, swelling, pain, and loss of function … Rapid resolution of painful chronic inflammation was confirmed in 20 case studies using medical infrared imaging … Our main hypothesis is that connecting the body to the Earth enables free electrons from the Earth’s surface to spread over and into the body, where they can have antioxidant effects. Specifically, we suggest that mobile electrons create an antioxidant microenvironment around the injury repair field, slowing or preventing reactive oxygen species (ROS) delivered by the oxidative burst from causing “collateral damage” to healthy tissue, and preventing or reducing the formation of the so-called “inflammatory barricade”. We also hypothesize that electrons from the Earth can prevent or resolve so-called “silent” or “smoldering” inflammation. There seem to be dozens of studies which confirm the physiological effects of grounding, which include anything from anti-aging and heart health benefits to improved sleep and much, much more.

“This simple process of grounding is one of the most potent antioxidants we know of. Grounding has been shown to relieve pain, reduce inflammation, improve sleep, enhance well being, and much, much more. Unfortunately, many living in developed countries are rarely grounded anymore.”
– Dr Jospeh Mercola

When grounded, the diurnal rhythm of the stress hormone, cortisol, begins to normalize. Cortisol is connected to your body’s stress response and helps control blood sugar levels, regulates metabolism, helps reduce inflammation, and assists with memory formulation. The figure below shows the results of a
study
that examined the effects of being grounded while sleeping over the course of eight weeks.

How You Can Get Grounded

We all spend most of our time walking on the earth wearing shoes with rubber or plastic soles. These materials are insulators, used to insulate electrical wires. They also disconnect you from the Earth’s electron flow, which we are supposed to (naturally) be connected to. If you wear leather-soled shoes (or vegan leather!) or walk barefoot on sand, grass, soil, concrete, or ceramic tile, you will be grounded. If you walk on asphalt, wood, rubber, plastic, vinyl, tar, or tarmac you will not be grounded. So the next time you are outside, take off your shoes! You can also use conductive systems while sleeping, working, or spending time indoors for a more convenient and lifestyle-friendly approach.

In 1952 German physicist Professor W.O. Schumann, of the Technical University of Munich, began attempting to answer whether or not the earth itself has a frequency — a pulse. His assumption about the existence of this frequency came from his understanding that when a sphere exists inside of another sphere an electrical tension is created. Since the negatively charged earth exists inside the positively charged ionosphere, there must be tension between the two, giving the earth a specific frequency. Following his assumptions, through a series of calculations he was able to land upon a frequency he believed was the pulse of the earth. This frequency was 10hz.

It wasn’t until 1954 that Schumann teamed up with another scientist (Herbert König) and confirmed that the resonance of the earth maintained a frequency of 7.83 Hz. This discovery was later tested out by several scientists and verified. Since then, The Schumann Resonance has been the accepted term used scientifically when one is looking to describe or measure the pulse or heartbeat of the earth. Even though the existence of the Schumann Resonance is an established scientific fact, there remain few scientists who fully understand the important relationship between this frequency and life on the planet. I thought I would include this information here because I feel it’s relevant to this article. You can continue reading it
here.
Recommended Articles
Related Articles
ERROR - Carousel is empty!
View All