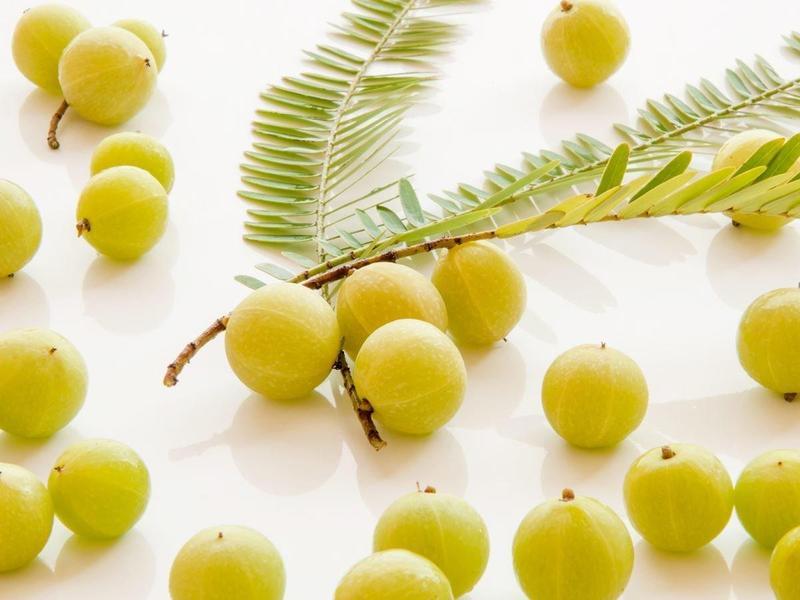 The ancient time proven writings of Ayurvedic Medicine, which translates into "Knowledge of Life", hold some of the oldest and most complete historical medical texts on healthy living existing on record. Within this expansive group of medical texts there exists hundreds of specific herbal formulations and herbal remedies designed to deliver maximum potency and efficacy balancing the body naturally.

With this cherished amalaki juice fruit botanical formula, look to maintain the body in an improved state of balanced health and overall mild detoxification. Ayurveda focuses upon energy and balance for each individual person. Amalaki

is great support and nutrition for the digestive tract, among other wonderful benefits including optimal function of the inner and outer skin, arteries, blood purification and liver rejuvenation. Amalaki

refers to the herbal use of the amla fruit, also called Indian gooseberry. The word amla literally means “sour,” and its other name, dhatri, means “mother” or “nurse.” Its associations point to Amalaki’s reputation as being greatly nourishing and supportive for a great array of body systems and all the body types, or doshas.

As the principal ingredient in Chyawanprash, the pillar Ayurvedic antioxidant superfood, Amalaki boasts a catalogue of benefits, including:

By supporting the inner and outer skin, Amalaki supports a host of health functions that are dependent on healthy inner skin lining the digestive system and organs. For example, the skin that lines the heart and arteries are uniquely supported by Amalaki. For the outer skin, Amalaki supplementation helps develop that radiance and clarity of the skin. Amalaki is sometimes used topically and is a powerful ingredient in Ayurvedic skin care.

Amalaki for Detoxification and Healthy Elimination

Amalaki very directly promotes detoxification with its rich antioxidant content. On a systemic level, detoxification begins with healthy agni (digestive fire), not only in the GI tract, but also in all of the tissues, and amalaki helps to balance agni throughout the body. Moreover, the elimination of toxins relies on healthy circulation, digestion, and elimination, and amla supports all three of these functions. Amalaki also has a particular affinity for the blood, the liver, and the spleen, and is therefore able to support the elimination of natural toxins while nourishing and protecting the body’s natural defense systems.1 Proper elimination is critically important to the detoxification process and amalaki fosters bowel health and regularity as well. A small dose of amalaki is binding and astringent in its effect while a larger dose very gently encourages elimination. Ultimately, amla supports virtually every stage of the detoxification process—from the innate intelligence of agni to the proper elimination of wastes and natural toxins.

From an Ayurvedic perspective, digestion begins with the experience of taste and amla contains five of the six tastes, lacking only the salty taste. Further, amalaki sharpens the sense of taste itself1 and so it is both stimulating and tonifying to the first stage of digestion. Amalaki also improves appetite and kindles agni (the digestive fire), which are both at the core of healthy digestion. Despite the fact that its predominant taste is sour, amalaki stokes the digestive fire without aggravating pitta. And, amalaki cleanses and protects the liver, which plays a critical role in transforming food into physiologically useful nourishment. Because pitta and agni are so intimately connected, the health of the digestive fire suffers when pitta is aggravated. Amalaki is particularly suited to clearing excess pitta from the digestive tract; its bitter taste and cooling energy help to flush excess heat out through the bowel. Amla can be especially supportive to digestion during the summer months when heat tends to accumulate in the body, particularly for those with pitta-predominant constitutions.

Amalaki’s ability to stimulate microcirculation and to build ojas are thought to help promote healthy blood sugar levels, particularly in conjunction with pitta imbalances. Amalaki also has an affinity for the urinary tract and balanced excretion of urine and balanced blood sugar levels go hand in hand. On a large scale, Amalaki’s support of the entire digestive process supports the body’s ability to process food in a wholesome and efficient manner.

Amalaki is a highly revered rasayana (rejuvenative) for the entire system. Specifically, it promotes youthfulness, bolsters immunity, tonifies all the body’s tissues and promotes overall health and well-being.1 It is a brain tonic, it promotes memory, and its sattvic nature fosters subtle awareness, balanced emotions, and clarity of mind.

" rel="noopener" target="_blank">Triphala literally means ‘three fruits’ and includes equal portions (by weight) of amalaki, bibhitaki, and haritaki. Triphala is the most widely used formula in Ayurveda. Like amalaki, triphala contains five of the six tastes—all but salty—and is primarily used to maintain a healthy digestive tract. Triphala is deeply nourishing and cleansing to all tissues and is a very effective detoxifier. Triphala also benefits the lungs, skin, and eyes, and it can be used as part of a weight loss program that includes proper diet and exercise. Triphala is typically taken as a hot infusion at night or as a cold infusion upon rising. If there are clear signs of excess heat and inflammation in the digestive tract, amla taken alone may prove more supportive than triphala.

Chyavanprash is a delicious nutritive jam, primarily aimed at bolstering the immune system. Chyavanprash is made with a base of fresh amla fruits and also includes a number of other herbs, ghee, sesame oil, sugar, and/or honey. It is particularly supportive of the respiratory tract as it nourishes the mucous membranes and helps keep the respiratory passages clean and clear. Chyavanprash also strengthens vata, nourishes the reproductive tissues, aides in the elimination of ama (toxins), and builds ojas. Chyavanprash can be taken on a long-term basis as part of a program designed to support overall strengthening, or recovery from an illness or stress. For others, it is more appropriately used seasonally, as a tonic in the winter months. Taking chyavanprash in milk (or almond milk if dairy is not appropriate) helps to carry its tonifying and rejuvenating qualities deep into the tissues.

How to Use Amalaki

Because taste plays such an important role in the digestive process and signals the body to initiate its own supportive mechanisms, Ayurveda traditionally recommends tasting herbs. Amla can be taken internally in four forms: a powder, a tablet, a liquid extract, or in a jam such as chyavanprash:

Amalaki powder offers the full experience of tasting the herb and also provides the most economical option for purchasing amla. Like triphala, amla powder can be taken as a hot or cold infusion in water, at night or upon rising. In some instances, taking amla in milk, ghee or another carrier substance may help to direct the herb to a specific tissue or organ, or guide it toward a particular kind of systemic support. An ayurvedic practitioner can advise you on the appropriate anupan (carrier) for your herbs. A typical dose of amla powder is ¼–½ teaspoon, once or twice daily, or as directed by your healthcare practitioner.

can provide a more convenient way to take amla, especially for those who are frequently traveling or on the go. The tablets also provide a nice alternative for those who find the taste a deterrent to taking the herb. A typical dose is one to two tablets, once or twice daily, or as directed by your healthcare practitioner.

provides an alternative method of taking amla. It's convenient, easy to assimilate, and has a long shelf life. This extract is made from the same certified organic amla used in making the herbal tablets and is extracted using non-GMO, gluten-free grain alcohol. A typical dose is a dropper full (about 30 drops) taken in 1–2 ounces of water or juice, one to three times daily, or as directed by your healthcare practitioner.

Amalaki in a Nutritive Jam—Chyavanprash

As a rejuvenative,
chyavanprash

is typically taken in the morning and evening.
Chyavanprash is a tasty jam

, and as such offers the full experience of tasting the herbal ingredients. The usual dose of chyavanprash is 1–3 teaspoons, once or twice daily, or as directed by your healthcare practitioner.

There has been significant scientific research evaluating the benefits of amla both on its own, and as an ingredient in chyavanprash and triphala. Among other things, studies have looked at amla’s ability to foster appropriate glucose levels, cholesterol levels, and its immunomodulatory and antioxidant effects. Below are a few links that summarize some of these findings:

A night dose of amla before sleep can weaken the teeth in the same way that over-exposure to citrus fruits might, eroding tooth enamel; taken in this manner, amla may also irritate the throat. Being an edible fruit, there are no other known issues with amla, even at higher doses.

Amla should be avoided in cases of high ama (toxicity) or when kapha is especially aggravated. It is also ill advised when individuals of a pitta-predominant constitution have diarrhea. There is some evidence to suggest caution among individuals with an iron deficiency because amla can form chelates with iron and thus reduce the amount of usable iron in the blood. Traditionally however, amla has been used to balance and build the blood.
Article byDemi Powell