THE FOOLS JOURNEY THROUGH THE TAROT - DEATH: DAY FOURTEEN 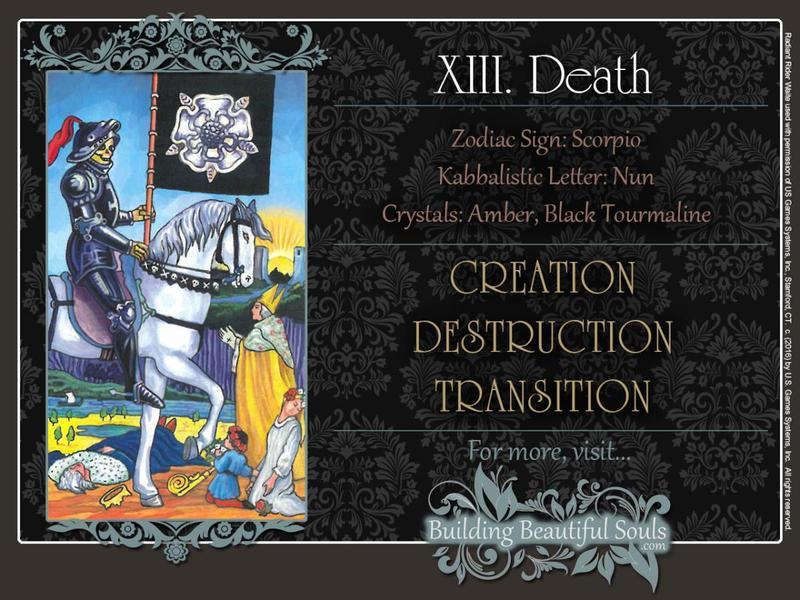 He cuts out nonessentials because he appreciates the basics of life. He goes through endings as he puts the outgrown aspects of his life behind him.

His process may seem like dying because it is the death of his familiar self to allow for the growth of a new one.

At times this inexorable change seems to be crushing the Fool, but eventually he rises up to discover that death is not a permanent state.

It is simply a transition to a new, more fulfilling way of life.

The Death card shows the Messenger of Death – a skeleton dressed in black armour, riding a white horse.

The skeleton represents the part of the body which survives long after life has left it; the armour symbolises invincibility and that death will come no matter what. Its dark colour is that of mourning and the mysterious, while the horse is the colour of purity and acts as a symbol of strength and power.

Death carries a black flag decorated with a white, five-petal rose, reflecting beauty, purification and immortality and the number five representing change. Together, these symbols reveal that death isn’t just about life ending.

Death is about endings and beginnings, birth and rebirth, change and transformation.

There is beauty in death, and it is an inherent part of being alive.

A royal figure appears to be dead on the ground, while a young woman, child and bishop plead with the skeletal figure to spare them.

But, as we all know, death spares no one.

In the background, a boat floats down the river, akin to the mythological boats escorting the dead to the afterlife. On the horizon, the sun sets between two towers (which also appear in the Moon Tarot card), in a sense dying each night and being reborn every morning.

The Death card is probably the most feared and misunderstood of all the cards in the Tarot deck.

Just mention the card’s name and most people freak out, worried they will suddenly keel over and die as soon as this card appears. This card is always used in the movies, going to fortune teller in a dark, dingy place; and the Death Card appears...Relax!

The Death card can be one of the most positive cards in the deck.

After a period of pause and reflection with the Hanged Man, the Death card symbolises the end of a major phase or aspect of your life that you realise is no longer serving you, opening up the possibility of something far more valuable and essential.

You must close one door to open another.

You need to put the past behind you and part ways, ready to embrace new opportunities and possibilities.

It may be difficult to let go of the past, but you will soon see its importance and the promise of renewal and transformation.

If you resist these necessary endings, you may experience pain, both emotionally and physically, but if you exercise your imagination and visualise a new possibility, you allow more constructive patterns to emerge.

Similarly, Death shows a time of significant transformation, change and transition. You need to transform yourself and clear away the old to bring in the new. Any change should be welcomed as a positive, cleansing, transformational force in your life.

The death and clearing away of limiting factors can open the door to a broader, more satisfying experience of life.

The Death card has elements of a sudden and unexpected change. Death happens to everyone, no matter who you are, how much money you have, where you live, or what colour your skin is; it is the same with a significant change.

Finally, Death is a sign that you need to learn to let go of unhealthy attachments in your life to pave the way to a fuller, more fulfilled life of deeper meaning and significance.

Thirteen is considered to be a karmic number. Many view it as unlucky, bit that is simply not true!

What is more often the case, is that this number brings with it a time of change and transformation in our lives.

(1+3) 4 = A need to let go of what no longer serves our stability and commit to what does.

This card is connected to Scorpio, a sign that is very adept at new beginning and embracing endings.

It is also the sign of the zodiac most closely associated with deep inner exploration and evaluation.