Uluru — The Most Sacred Site of Australia 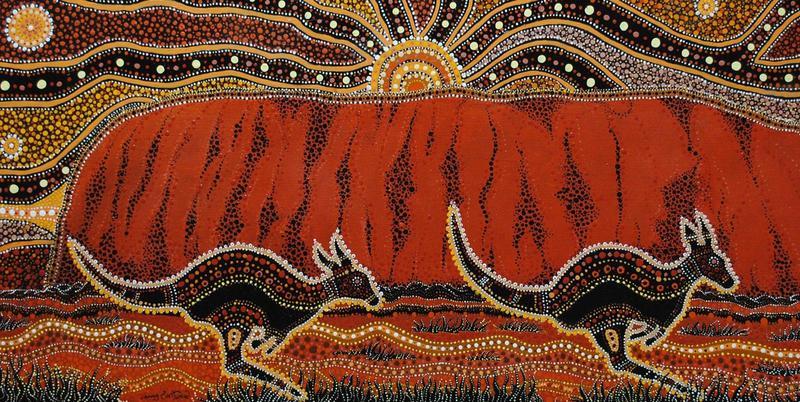 The biggest rock in the world , Ayers Rock, or as the aborigines call it Uluru is positioned 450 kilometers aside from Alice Springs. This unique stone plays a vital role in the mythology and spiritual practices of the indigenous people on the continent. Its height is 348m. with circumference of 9 kilometers.

According to the beliefs of the tribes that inhabit the western desert, Uluru is a mythical beast, which buried his head in the sands. Once a year he rises his head to check the desert and the people. The shamans are these who communicate with that beast and know when the day will come.

On that day the people celebrate the day of the rock. All the tribes of Australia gather around the Uluru. Some of the tribes pray to the sacred rock for luck and prosperity. For other tribes Uluru is a home of evil spirits. They just pray these evil spirits to forget them.
None of them is able to predict when the rain will come. It is interesting to mention that in most of the cases the rain is falling down on only in the area over and around the Uluru rock. The aborigines and their shamans however, are able to predict these rainfalls . When they know that the rain is coming they start preparations . They all prepare for travel, as they will all gather around Uluru when the rain starts falling.

The downpour that falls on the sacred mountain isn’t a common event. Sometimes years can pass before the new rainfall comes. The rain that falls on Uluru even doesn’t look like regular rain. A unique transformation on the weather conditions occur. The day turns from sunny to cloudy for just few minutes. The wind starts blowing and the downpour floods the lands. The rain doesn’t last long and in just few minutes the weather conditions magical return to their regular state – hot and sunny.

When the clouds disperse and the sun start shining again the flows that run down the rock start looking like blood and Uluru looks even brighter that he usually is. Since time immemorial aborigines honor the lands and all the natures creations as sacred and the sacred land shaft is in the base of their legends and folklore. The aborigines look at the earth as a manifestation of the Dream. They believe that the sacred ground of Australia and Uluru poses unique powers. Each tribe has responsibility to take care for some of these sacred places and objects. Some of these places are dedicated to mythological heroes of the Aboriginal folklore, other to the high spirits of the Dream – divine entities that forged the world around us. The sacred placed are picked and outlined by the shamans. They identify these places thanks to the ancient knowledge passed from one shaman to another.
He is responsible for all the rituals and ceremonies held on that place . He is also a guardian of the sacred songs and the one that is able to communicate with the spirits of the Dream . According to the local tribes Uluru is also a doorway , an entrance to the spiritual realm . To this day the Aborigines still hold strong believe in the unique powers of Uluru .

Anangu are believed to be the direct descendants of the spirit – creators of Uluru and the nature that surrounds it . The Anangu people are the guardians of the Rock . Their responsibility is to protect the mountain from any forms of physical and spiritual sacrilege .

Uluru is a mystery for the meteorologists too
The water that falls on Uluru however, continues to flow over the rock until it drains down
A chosen sentinel must protect the place and its energetic flows