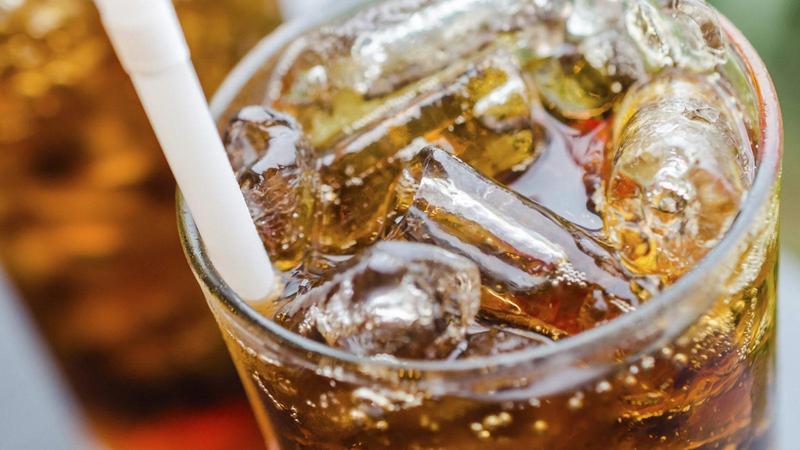 Statistics show that Americans drink more soda than ever before. They account for more than 25 percent of all drinks consumed in the United States. More than 15 billion gallons were sold in 2000 — about one 12-ounce can per day for every man, woman and child.

But here’s some information that may keep you away from opening the can:

Soda is a significant contributor to obesity. Drinking a single can a day of sugary drinks translates to more than a pound of weight gain every month. And diet soda is just as likely to cause weight gain as regular, or even more — it may sound counterintuitive, but people who drink diet soft drinks actually don’t lose weight. Artificial sweeteners induce a whole set of physiologic and hormonal responses that actually make you gain weight.

Soda damages your liver. Consumption of too many soft drinks puts you under increased risk for liver cirrhosis similar to the increased risk faced by chronic alcoholics.

Soda dissolves tooth enamel. Soft drinks are responsible for doubling or tripling the incidence of tooth decay. Soda’s acidity is even worse for teeth than the solid sugar found in candy.

Colas of all kinds are well known for their high phosphoric acid content, a substance that changes the urine in a way that promotes kidney stone formation. Drinking one quart (less than three 12-ounce cans) of soda per week may increase your risk of developing kidney stones by 15 percent.

Anything that promotes weight gain increases the risk of diabetes. Drinking soda also stresses your body’s ability to process sugar. Some scientists now suspect that this may explain why the number of Americans with type 2 diabetes has tripled from 6.6 million in 1980 to 20.8 million today.

Heavy consumption of soda is a strong predictor of heartburn. Many carbonated beverages are very acidic. They also deliver a lot of air in the form of carbon dioxide, which can cause distension of your stomach. And that distension appears to be associated with more reflux.

Experts have reasons to believe that overconsumption of soda leads to an increase in blood pressure. It doesn’t matter if the soda is regular or diet.

Heavy soda drinkers are more likely to develop risk factors for heart disease. Research shows that drinking more than one soft drink a day is associated with an increased risk of developing metabolic syndrome — a group of symptoms such as central obesity, elevated blood pressure, elevated fasting blood sugar, elevated fasting triglycerides, and low levels of HDL or “good” cholesterol. Having three or more of the symptoms increases your risk of developing diabetes and cardiovascular disease.

Gastrointestinal distress includes increased stomach acid levels requiring acid inhibitors, and moderate to severe gastric inflammation with possible stomach lining erosion. Drinking sodas, especially on an empty stomach, can upset the fragile acid-alkaline balance of your stomach and other gastric lining, creating a continuous acid environment. This prolonged acid environment can lead to inflammation of your stomach and duodenal lining.

I’ve been warning my readers of the dangers of soda since I started this site, and this is a good list of reasons why you’ll want to avoid this beverage like the plague.

Soda is on my list of the five absolute worst foods and drinks you can consume. Because even though fat has 250 percent more calories than sugar, the food that people get MOST of their calories from is sugar from corn, or high fructose corn syrup (HFCS).

According to USDA estimates, the per capita consumption of HFCS was about 40 pounds per year as of 2007, primarily in the form of soft drinks. Tragically, high fructose corn syrup in the form of soda, is now the number one source of calories in the United States.

Food and beverage manufacturers began switching their sweeteners from sucrose (table sugar) to corn syrup in the 1970s when they discovered that HFCS was cheaper to make.

HFCS is only about 20 percent sweeter than table sugar, but it’s a switch that has drastically altered the American diet.

The good news about all these shocking health facts is that stopping the pernicious habit of drinking soda is one of the easiest things you can do. As you can clearly see from all the examples above, you can radically improve your health simply by cutting soda out of your diet.

In fact, I am confident that your health improvement would be even more profound than if you quit smoking – a statement that has raised quite a few eyebrows through the years.

Why do I believe this?

Because soda clearly elevates insulin levels, and elevated insulin levels are the foundation of nearly every chronic disease, including:

In addition to the ten health problems above, most of which I have reported on through the years already, there is one more that is not discussed as often: drinking soda also increases your cancer risk.

Soda Drinkers Have a Higher Risk of Several Types of Cancer

Numerous studies have pointed out the link between sugar and increased rates of cancer, suggesting that regulating sugar intake is key to slowing tumor growth.

In one human study, 10 healthy people were assessed for fasting blood-glucose levels and the phagocytic index of neutrophils, which measures immune-cell ability to envelop and destroy invaders such as cancer.

Eating 100 grams of carbohydrates from glucose, sucrose, honey and orange juice all significantly decreased the capacity of neutrophils to engulf bacteria.

Another four-year study at the National Institute of Public Health and Environmental Protection in the Netherlands compared 111 biliary tract cancer patients with 480 controls. In this study the cancer risk associated with the intake of sugars more than doubled for the cancer patients.

Many studies have linked sugar intake with different types of cancer, such as:

Breast cancer — An epidemiological study in 21 modern countries that keep track of morbidity and mortality (Europe, North America, Japan and others) revealed that sugar intake is a strong risk factor that contributes to higher breast cancer rates, particularly in older women.

Throat cancer – Throat cancer is a particularly hard cancer to beat–more than 90 percent of patients with invasive esophageal cancer die within five years of diagnosis.

Research has revealed that those who drink soda might have a higher risk of developing esophageal cancer. They found a strong link between the accelerated rate of people drinking carbonated soft drinks and the growing number of cases of esophageal cancer over the course of two decades.

Colon cancer — According to another study, women who consume a high dietary glycemic load may increase their risk of colorectal (colon) cancer. Glycemic load is a measure of how quickly a food’s carbohydrates are turned into sugars by your body (glycemic index) in relation to the amount of carbohydrates per serving of that food.

The study consisted of more than 38,450 women who were followed for almost eight years. The participants filled out questionnaires about their eating habits, so researchers could examine the associations of dietary glycemic load, overall dietary glycemic index, carbohydrate, fiber, non-fiber carbohydrate, sucrose, and fructose with the subsequent development of colon cancer.

They found that women who ate the most high-glycemic-load foods were nearly three times more likely to develop colon cancer.

Do You Want to Radically Improve Your Health?

Then replace soda and other sugary drinks with clean, pure water.

Normalizing your insulin levels is one of the most powerful physical actions you can take to improve your health and lower your risk of cancer along with all the other diseases and long-term chronic health conditions mentioned above.

Fortunately, it is also the variable most easily influenced by healthy eating and exercise.