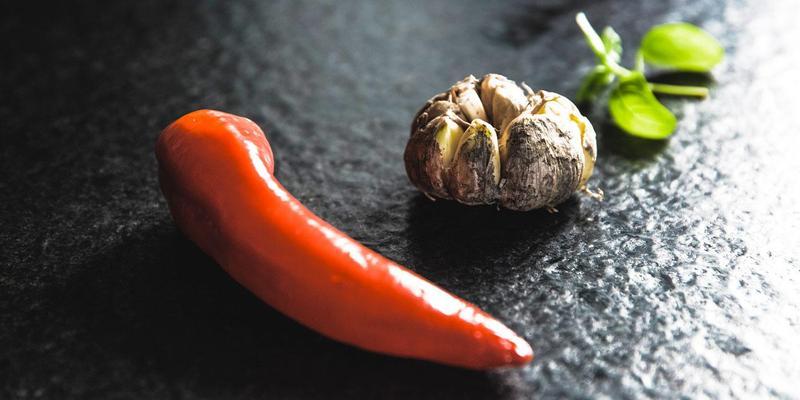 Every cook knows the way that fresh herbs can lift the flavor of a dish. But have you ever thought about why herbs have the flavors they do—why they don’t just taste like any other green leaf? Or, for that matter, why green leaves taste the way they do? The answers can help you understand how to get the most out of your favorite herbs.

The flavors of both herbs and spices come from chemicals that the source plants make and store. Herb plants store them in their leaves, spice plants in seeds and bark and roots. Unlike fruits, whose aromas are a blend of dozens of flavorful chemicals, herbs and spices typically have one or very few chemicals that give them their distinctive character. Thyme’s flavor, for example, comes from a chemical called thymol, spearmint’s from menthol and carvone.

Ripe fruits are delicious as is, because the parent plant has evolved to encourage animals to eat them and spread the seeds far and wide. Herbs and spices can make foods delicious, but they’re usually not delicious in themselves, because plants don’t want animals to chew up their leaves and seeds and roots.

Have you ever chewed on a sprig of thyme or chomped down on a whole peppercorn or clove? It’s not pleasant. That’s because most herb and spice flavors are actually chemical weapons. Their role is to repel insects and snails and other animals that try to eat them, and to kill microbes—especially fungi—that try to infect them. (The flavor chemicals also sometimes serve as a form of birth control. When the leaves of a thyme plant drop to the ground, thymol prevents the plant’s seeds from germinating, so the plant won’t have to compete with its offspring for nutrients from the same patch of soil.)

When I first got interested in understanding flavor, decades ago, I managed to get my hands on a vial of pure thymol, the essence of thyme flavor, from a chemical supply company. The label sported a big red X and a warning: Harmful by inhalation, in contact with skin, and if swallowed. Harmful, that is, in all the ways a cook works with thyme! But a sprig of thyme or a peppercorn or clove carries a relatively small dose of deterrent. And when you add it to a mixture of other bland ingredients, that dose is diluted to a delicious hint of its full-strength self.

There are exceptions to the inedibility of straight herbs and spices—such things as parsley and dill, anise and fennel seeds, whose chemical defenses don’t have as irritating an effect on our mouths. But in fact the generic grassy, “green” flavor of all leaf vegetables—lettuce and spinach and so on—mild as it seems to us, is also a form of chemical defense. The typical vegetal smell of cut grass or crushed leaves is released when the damage to the plant cells frees particular enzymes to act on long carbon-chain molecules in the cells’ membranes. The long chains are too big to escape into the air where we can smell them, but these enzymes break the long chains down into fragments (mainly six-carbon fragments). These -molecules—hexanal, hexanol—are small enough to be volatile, and they’re what we smell when we crush or chew on green leaves.

It’s no accident that plant leaves produce these six-carbon fragments when they’re damaged. Plant biologists have found that they directly inhibit the growth of molds, and they’re toxic to caterpillars and other predatory animals that chew on the leaves. But as they waft away from the leaf, they also attract wasps that are predators of the caterpillars. The plant can also chemically modify the fragments to act as signals to other parts of the same leaf, other leaves on the plant, and even other plants. The modified molecules are a signal that an attack is in progress, and they induce the nearby cells and leaves and plants to boost their chemical defenses.

So attacks on a plant can cause both the immediate release of aroma compounds and a longer-term buildup of aroma compounds in its leaves. Sure enough, studies of conventional and organic production methods have found that, because they’re not protected by pesticides, organic plants that suffer from insect attack can accumulate higher levels of flavor chemicals and other protective molecules, including antioxidants.

Of course, it would be nice to have both good-looking leaves and great flavor. And plant biologists have found a cool method to get just that.

One way that plants recognize an attack by insects or by mold is by detecting the presence of chitin, which is an unusual cellulose-like molecule found in the cell walls of molds and in the exoskeletons of insects and crustaceans. Chitosan, a modified version of crustacean chitin, is a versatile material and commonly available at health food stores. And as it turns out, if you expose a plant to chitosan, the plant will respond as if it were under attack, and rev up its production of chemical defenses.

In one experiment, basil plants that were given chitosan-infused water accumulated 20 percent more essential oil in two to three days than unexposed plants. Similar effects have been observed in broccoli and soy sprouts. Chitosan is essentially plant stress in a bottle—the alarm without the damage.

What does all of this mean for the cook? For one thing, you should think twice before you discard slightly buggy or moth-eaten produce. It may not be presentable as is, but it may have more flavor and nutrition than a perfect leaf. And if you grow plants of your own—even pots of herbs in the window or on the rooftop—you may get more flavor by lacing their drinking water with chitosan.

How you handle herbs can also affect their flavor. The defensive chemicals responsible for plant flavors are usually concentrated in fine, hairlike glands on the leaf surfaces (the mint family, including basil, oregano, sage, shiso, and thyme) or in special canals within the leaves (most other herbs). If you leave the herbs pretty much intact, what you get is mainly the characteristic flavor of that herb. But if you crush the herb, or cut it very finely, you damage a lot of cells and cause the release of the green, grassy, vegetal defensive chemicals. These can come to dominate the herb’s own particular flavor.

It’s worth experimenting with different ways of handling herbs to see whether you’re getting the flavor you want from them. Bartenders sometimes “spank” mint rather than muddle it, thereby liberating the mint aroma from the surface glands while minimizing breakage of the leaf cells and development of the vegetal quality. You can be even gentler on the leaf cells by rubbing the undersides of two mint leaves together (take a close look and you’ll see that most of the flavor hairs are on the underside). One interesting study from Japan a few years ago showed that in the case of fresh sansho (a relative of Sichuan pepper), which stores flavor inside the leaves, crushing brought out the herb’s citrusy notes but also a strongly grassy aroma, while slapping the leaves brought out citrus and floral notes without the grassiness.

You can also slow the leaf enzymes that cause grassiness by chilling the leaves and keeping them cold as you chop or crush them. Or you can permanently deactivate them with a quick blanch (though the high temperature can also affect the characteristic herb flavor).

Or you can go for the grassiness. Cook’s choice.