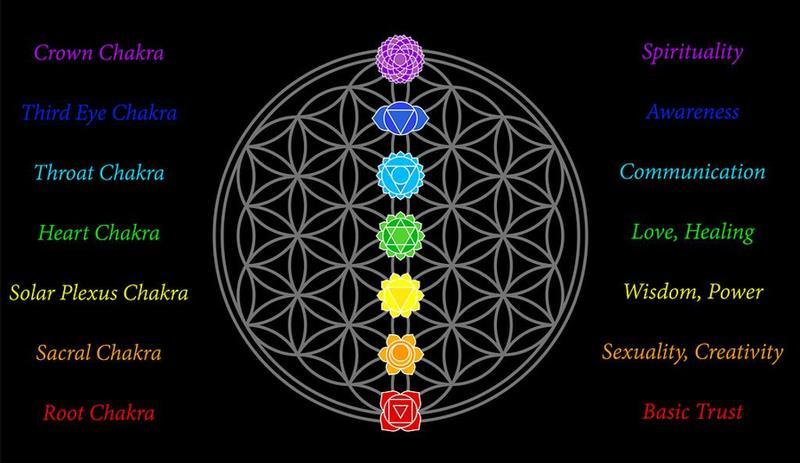 As an energy healer, the chakras of your patient will be of central importance to you as you work. Because the chakras are so important, and because you have begun channeling energy into them and sensing their condition by passing your hands over them, it is beneficial to have a basic understanding of them.

There are seven major chakras associated with the human body, and numerous minor ones which are much less important. In Chios, we concern ourselves with the seven major chakras primarily. These major chakras do not actually exist as "objects" (they are actually energy patterns) but there are certain specific locations on the body that correspond to them, five along the spine, and two on the head. Each chakra is shaped like a funnel or whirlpool of energy.

Their vortices lie inside the body, along the spinal cord (which corresponds to a central energy channel) and up into the head. Each of the seven chakras has both a front (usually dominant) component, and a rear (usually less dominant) component, which are intimately related. The 1st and 7th chakras, however, are usually represented and thought of as having only the one dominant component, as it is far, far more significant than the weaker component in these two chakras. The seventh chakra extends vertically upwards above the head. The 1st chakra extends forwards from the base of the spine, and downwards, at up to a 30 to 45 degree angle, although its exact position will vary from person to person and often appears to extend mostly downwards towards the feet. The other five chakras, spaced between the 1st and 7th, have at their appropriate locations a front component extending out the front of the body and a rear component extending out the rear of the body.

Each of these seven major chakras, or primary energy centers, has its own character and corresponds to a unique aspect of our being—from the 1st chakra (physical vitality, or survival) to the 7th chakra (totality of beingness, or spiritual perfection). Because the chakras are spiritual entities, however, it is impossible to convey a true explanation of the nature of each chakra in words alone—each is a realm of being and consciousness that cannot be described in mere words but must be experienced. In later Chios levels you will learn to sense the true spiritual nature of the chakras for yourself. Each chakra also has a certain true color of the visible light spectrum associated with it—from red (1st chakra) to violet (7th chakra). You will also later learn to sense and see the true color of the chakras.

The chakras are energy processing centers, points of energy flow, and act as the major energy junctions in the energy field. The energetic operations within them are what make every aspect of our bodily, emotional, mental and spiritual life possible. Every chakra is always receiving energy into itself, from all around, and it is this energy that supports the energy field and the entire life process of each individual. Aside from this entry of energy into the energy field through each of the seven major chakras, there is also an upward flow of energy in the central energy channel, from the lower to higher chakras. This upward flow of energy originates mostly from the earth and then moves through the 1st chakra, 2nd chakra, etc. as it ascends finally to the 7th (crown) chakra. This energy is processed at each chakra, on its way up, in accordance with the unique nature of that chakra. The lower chakras are simpler-functioning, but as the energy ascends upwards there is a greater degree of sophisticated and more spiritual functioning, intimately related to the life experience and state of being of the individual.

A defect in the energy flow through any given chakra will result not only in a defect in the energy provided to certain portions of the physical body, near to and associated with that chakra, but will also affect emotions, mind and spirit in certain specific ways associated with the nature and character of that particular chakra. Defects in a certain chakra will also often affect many other parts of the energy field—they will impair the entire energy field's ability to process energy. This is because the energy field is a holistic entity: every part affects every other part.

The seven major chakras will be of central importance to you as you learn energy healing. It is important to reiterate, however, that an intellectual understanding of the chakra system will not be useful to you in your healing work. The true energy healer learns to expand his or her awareness and experience each of the chakras as a realm of being. Each chakra is a realm with its own nature and consciousness. As you begin to channel energy into the chakras, and practice the passing of hands over them, begin to allow some sense of the unique nature of each chakra to form in your awareness. This is not a thinking process, but one in which you merely open yourself and allow impressions to form in your whole being. You may also begin to gain some insight into the condition of each chakra in your patients, as well.