Selamat Hari Raya to all Malaysians 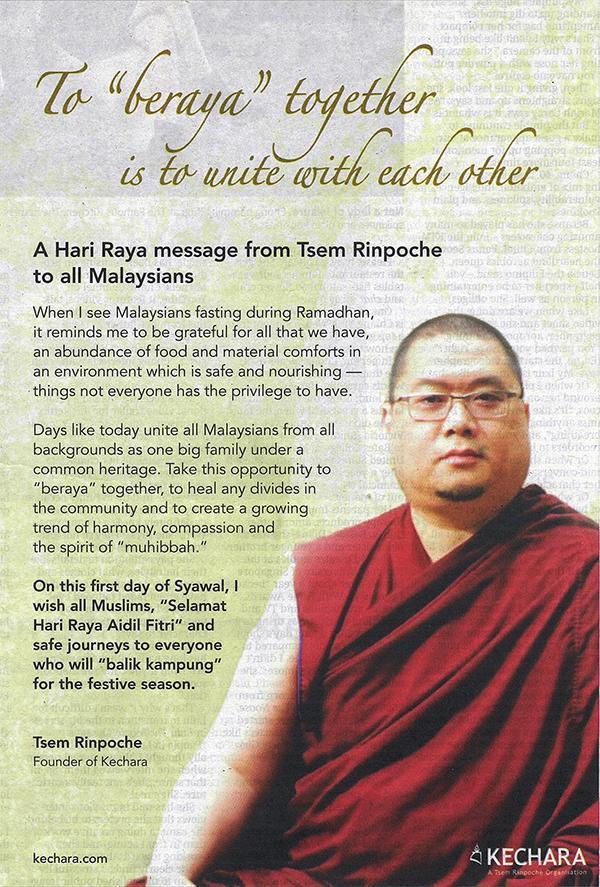 Since I first started coming to Malaysia in 1992 which was 25 years ago, one aspect of this beautiful country which I have always appreciated is its multi-cultural nature. In fact it’s not uncommon to hear three, sometimes even four languages often being spoken in one conversation because everyone has grown up together and is so exposed to each others’ cultures. It is quite rare around the world to find a country which is such a melting pot, where each group is so close to one another, and yet there is peace, harmony and stability.

So because all Malays are Muslim, this means every year half of our population which is 15 million people will join billions of Muslims around the world to fast during the holy month of Ramadhan. At sunrise they will wake up to do prayers and take a meal, and then they will not eat or drink anything until sunset. Then every evening at sunset, they will break fast (called buka puasa) with their family and loved ones. There is also a wonderful tradition of ‘open house’ events during this time. This means people will literally open their houses to their neighbours and friends to come and join them to break fast. Anyone who shows up is welcome and given a place at the table. So Ramadhan is a holy month for fasting, contemplation and strengthening one’s faith, as well as our bonds with the community and our loved ones.

The end of Ramadhan is known in Malaysia as Hari Raya Aidil Fitri. In fact, you can read more about it here in English or Malay. During this time, it is a national holiday so many families will take the opportunity to leave the towns and cities, to go back to their hometowns. This mass exodus of people from urban to rural areas is known as ‘balik kampung‘ or literally ‘return to village’ in the Malay language. The phrase is so famous that there’s even a famous Malay song of the same name!

So Ramadhan is a holy month for 15 million people in Malaysia. But because all Malaysians have grown up with one another, they are very familiar with Ramadhan and also Hari Raya. In the same way someone in the United States will wish everyone “Merry Christmas” whether you are Christian or not, in Malaysia we have a similar greeting at the end of Ramadhan which is “Selamat Hari Raya Aidil Fitri”. They might even add “maaf zahir dan batin” at the end, which loosely translates as “I seek forgiveness (from you) physically and spiritually”.

I just wanted to share with you a little bit of information about the local Malay culture in Malaysia which is unique and beautiful. And recently, I was given an opportunity to express my good wishes to all Malaysians in an article that was published in the Sunday Star. This is a national newspaper in Malaysia with a circulation of more than 1.5 million people. In the article, I was able to explain some of the social work and community initiatives I have been able to establish to give back to this country.

I am fortunate to live in a peaceful, stable and wonderful country like Malaysia. We have food, a good economy, no conflict and wars, a stable government, freedom to practise whatever we like, no natural disasters like earthquakes and volcanoes. We have warm weather and the people are very welcoming and respectful of each others’ faiths and cultures. For the the 25 years that I have been coming here and finally residing here, Malaysia and her government and her people have been very kind to me. Without their support, many of my works would not have been possible and I thank them very much. That is why I established community initiatives like Kechara Soup Kitchen, because I would like to give back to Malaysians who have been kind to me.

Copyright Disclaimer: Under Section 13 of the Malaysian Copyright Act 1987, allowance is made for “fair dealing” for purposes such as non-profit research, private study, criticism, review or the reporting of current events. The Operator and author(s) of TsemRinpoche.com, a not-for-profit blog, do not claim ownership on the intellectual property rights of the contents, images and/or videos reproduced in this article. Any subsisting intellectual property rights shall belong to the legal owner of the contents, images and/or videos.