SEEING MYSELF THROUGH THE SCIENCE OF ASTROLOGY AND TAROT 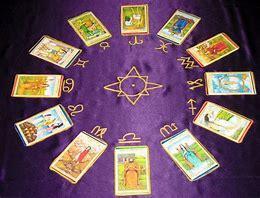 I have bought the book written by Corrine Kenner titled Tarot and Astrology – Enhance Your Readings with the Wisdom of the Zodiac. I would like to utilise this system moving forward. I have used the information from the Wizards Tarot deck by Corrine Kenner and artist John Blumen. They designed this deck with Astrology in mind; and since it pictures teachers and students at a school of mystery and magic, they are of the opinion that it makes for an excellent teaching guide for the marriage of Astrology and Tarot.

We relate to the Sun as we relate to the God Himself. The Sun is our source of light, heat, and radiant, life-giving energy. We measure our days by the rising and setting Sun. It’s a metaphor for life and death, and a symbol of our hope for rebirth.

The Sun is an important focal point in any astrological chart: It represents the “Ego And The Self.” It symbolises confidence and enlightenment. It is a depiction of our “Inner Light” and it describes the way we shine.

The Sun’s energy is masculine and direct.

The goddess of Justice is almost always depicted with the scales of balance – the emblem of the sign of Libra. The iconographic imagery links the card to Libran' concept of balance. Libra is skilled at solving problems, compromise and arranging diplomatic solutions for any conflict. Occasionally, Libra’s need to see both sides of any issue can make them seem indecisive. Their charm, however, makes up for it!

Libran’s have an innate need to balance themselves through relationships with others. They are typically friendly, gregarious, and charming. They are exceptionally social creatures, with visionary, social and humanitarian ideals.

They tend to express themselves through artistic pursuits and have a keen appreciation for the beauty and harmony of art.

LIBRA’S ELEMENT IS AIR – ACE OF SWORDS: THE POWER OF AIR

From our first breath to our last, air is the invisible force that keeps our spirit linked to our physical form. Air is the invisible whisper and spirit that maintains the pulse of life. Air is the realm of thought and communication. Our thoughts and ideas travel through the Air, both literally and symbolically. We transmit our outbound broadcasts, and we receive inbound messages and bulletins.

Air is an intellectual concept. The Element of Air is mental, light, elusive, uncontainable, conversational and sociable. The Ace of Swords symbolises all the power of Air. Swords move through the air, like words and unspoken thoughts.

LIBRA IS A SECOND DECAN CARDINAL SIGN – THREE OF SWORDS

In astrology, a decan is the subdivision of an astrological sign; each sign is allocated a Triplicity, consisting of three of the four classical elements, air, water, earth, and is therefore subdivided into three equal parts of 10 degrees each; these parts are referred to as decans.

Saturn in Libra – Lord of Sorrow! Second Decan of Libra is ruled by Saturn, the ringed Planet of boundaries and limitations and at this point, Libra is forced to recognise its restrictions as well.

That explains the grief and sorrow associated to the Three of Swords. Despite the fact that Libra is at the Height of its power and potential, it’s not free to float among the clouds as its airy, intellectual nature would like. Instead, Libra is weighed down by worldly restrictions that Saturn imposes.

Libra’s emphasis on relationships also generates its own fair share of sorrow. Even the best relationships demand to be constantly weighed, balanced, and adjusted! Justice is assigned to the entire month of Libra and the Three of Swords is vaguely reminiscent of the Scales of Justice.

The card illustrates mental anguish as Libra comes to terms with two seemingly irreconcilable differences and points of view. Both extremes are piercing, but the sword in the middle demonstrates that a painful compromise is usually possible.

The First House is the entrance into a chart because it represents the first thing we notice about anyone we meet. The First House is ruled by Aries, The Emperor card. He is the “King of The Castle”, and he is perfectly at home in the First House, guarding the front door and deciding who will gain admission to the “Inner Chambers”

MY MOON IS IN TAURUS – THE HIEROPHANT

The Moon is the ruling Planet of Pisces and is changeable. It is sensitive, compassionate, selfless, and intuitive. It can also be restless, self-destructive, self-pitying and secretive. Throughout myth and history, the Moon has usually been a feminine symbol, since it reflects the light of the Sun, it’s often perceived as a mater or companion to the Sun.

The Moon is also the Earth’s companion, a partner in time and space. She reveals herself in bits and pieces. She hides the dark side of her nature.

Taurus plays for keeps, especially when it comes to matters of spiritual value. That’s what makes this sign a perfect match for the Hierophant, the card of time-honoured values and beliefs. Taurus is a sign of stability and convention, while The Hierophant is a traditionalist who values faithfulness, monogamy, and procreation.

Both Taurus and the Hierophant are committed to structure and prosperity, along with creative comforts and objects of beauty that represent spiritual treasures. The word “hierophant” shares the same name as the world “hierarchy”, which means an organisation with varying levels of authority; a hierophant is the final authority on matters of faith. He has the power to speak on behalf of God, to explain the teachings of divine wisdom, and to serve as a bridge between this world and the next.

The glyph for Taurus looks like the head of a bull, or a ring in a bull’s nose. Like bulls in a meadow, Taurus and The Hierophant are committed to creature comforts. Both can be bull-headed: stubborn, immovable, and almost impossible to placate. Both can be bullish when it comes to their beliefs.

But both can also be a rock of solidarity and comfort in difficult times. They are determined and loyal, dedicated, and enduring. In a sense, the Hierophant is a spiritual best of burden.

TAURUS IS THE ELEMENT OF EARTH – ACE OF PENTACLES: THE POWER OF EARTH

We are the children of the earth. We spend most of our lives held fast to its surface, tethered to our mother planet by the sheer force of gravity, and we rely on the earth to support our weight. Earth is solid, practical, supportive, reliable, physical, tangible, and material.

Earth, however, is more than just our foundation; it is the very substance of our physical makeup. We rise from the ashes and return to the ashes, and transition from dust to dust. The Earth is also our vantage point for our vision of the stars; it’s our ride through outer space.

The Ace of Pentacles symbolises all the power of earth as well as Taurus. They correspond to the coin-shaped Pentacles. Like money, Pentacles serve as a reminder that the tangible objects we prize have significance and meaning far beyond their monetary value.

Pentacles are receptive, and they make an excellent counterpart to the “Airy Energy of the Swords”. So the complexity between my Sun sign and my Moon sign are in perfect harmony with each other.

Believe it or not, Death card is not a bad omen. It is a card of transition. The Death card heralds the completion of one chapter of life and the exciting new start of another – it may call for the release of old habits, old patterns, and old relationships that have served their purpose and now should be relegated to the pages of history!

Scorpio is the eighth sign and it rules the eighth house of the zodiac, where astrologers look for information about sex, death, joint resources, and other people’s money.

Together with my Life Path Number 7 and the information I am able to gather from the placements of my Sun and Moon, I have been able to begin to map my life. I personally have found all of this information about myself to be about 90% accurate, because I am still a unique individual with my personal brand of uniqueness.