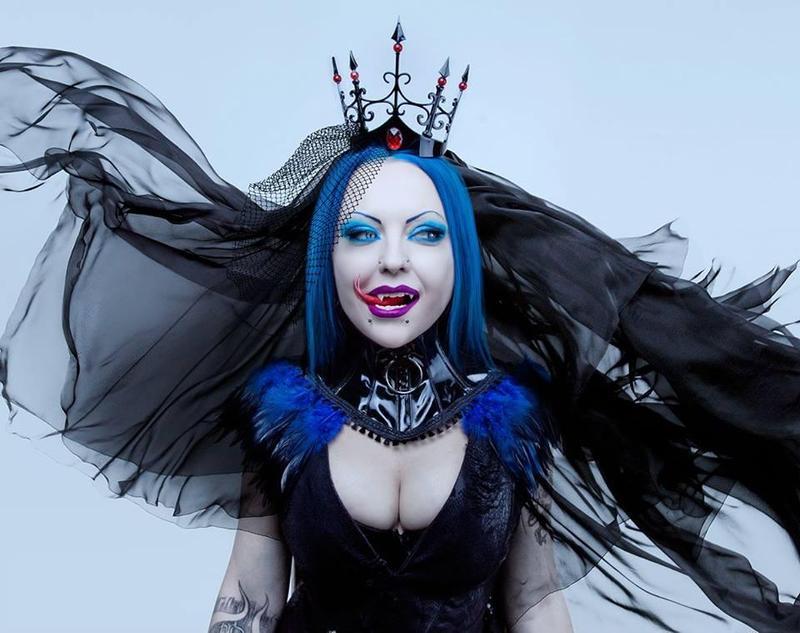 Ambient Feeding - The most basic of all energy feeding techniques. Feeding on the cloud of life-force energy radiated by humans.

Aura - The outer layers of the human subtle body, equivalent of the skin.

Awakening - The actual realization of a vampire that recognizes the “Need” and or a strong draw to the vampire archetype.

Black Swan - A mundane who is friendly to vampire culture and sometimes act as donors.

Black Veils - The teachings, traditions and philosophies of the Sabretooth Clan put into words of power.

Blood and Roses - A vampire wedding or handfasting involving three levels or “rings.” “First Rings” is a year and a day, “Second Rings” lasts for 7 years and Third Rings are for eternity. At the end of the duration of each set of rings the couple can renew at that level, let it expire or move to the next level.

Chakras - Energy centers within the subtle body. Some consider them akin to organs.

Communion - To cycle and exchange energy between to two energy sensitive vampires.

Coming Out of the Coffin - To publicly acknowledge one is a vampire to friends and family, being open about one’s nature. Akin to “Coming out of the Closet” for the LBGT community.

Court - A private (closed) or public (outer) event similar to a “salon noir” geographically based gathering of vampires private from the mundane world. Courts are usually formal events which are akin to “salon noir’ events of La Belle Epoque France including ceremonies and rituals, dress code (often all black clothing with fangs), live performances, etc.

Deep energy - AKA “core energy” is the deepest part of the individual’s subtle body.

Dharma - Different from fate or destiny this refers to “purpose.”

Elder - A senior member of the vampire community who has been around for a long time (usually 5 years) and is often seen as a mentor and leader.

Emotional Vampire - “Emo-vamps” are usually unawakened vampires or individuals who raises emotions is often considered a form of parasitic vampirism. This is described as "traditional psychic vampires" by Anton LaVey in the Satanic Bible and in Psychic Self Defence by Dion Fortune.

- The fandom part of the vampire subculture who are fans of TV shows, literature and media such as Twilight fans, Anne Rice fans, etc.

Fangsmith - A craftsperson who makes custom made fangs for the vampire community.

Feeding - The process of gathering or harvesting the excess life-force generated by the human body. The benefits of this include sating the energetic Need and feeding it increases energy inside of us which can be applied for magick and energy work techniques.

Fledgling - A newly awakened vampire, usually within a year of their formal awakening.

Gaja - An individual who takes the lifestyle way too seriously. Often claiming they are truly immortal, dress in outrageous costumes, etc.

Haven - a nightclub, gathering place or event friendly to the vampire subculture.

Halo - The energy signature and “spirit” of a specific geographic area originally founded within the Sabretooth Clan but used by many in the vampire subculture. Examples include “Gotham Halo” is NYC’s five boroughs, Westchester, Long Island and NorthEastern NJ, “Angel Halo” is Los Angeles and “Lutetia Halo” is Paris France.

House - A coven of vampires.

Hunters - Ridiculous individuals who think they are actually hunting real vampires. This is usually a myth within the vampire community.

Hybrid - A living vampire who is a mixture of sanguine (blood) and psychic (energy).

Legends - Mundane myths and legends of history outside the Legacy about vampires, including Highgate Cemetery, Dracula, Bathory, etc.

Life-Force - Is also known as prana, chi, ki, etc. and is the energy which animates and radiates from all living beings.

Lifestylers - “Fashion vampires” are individuals who incorporate the vampire archetype into their lifestyle as a philosophy, aesthetic fashion sense (fangs, contacts, clothing) of identity.

Living Vampire - An individual who identifies with the vampire archetype in some way. Also known as a “real vampire.”

Long Black Veil - (LBV) was a weekly vampire nightclub in NYC at MOTHER nightclub from March 1997 to 2000 hosted by the Sabretooth Clan. Here event was a centerpoint of the history and foundations of the modern vampire subculture.

Mentor - On individual, usually an elder who actively takes on a student and teaches them the culture of the vampire world.

Meridians - Channels of energy through the subtle body akin to veins and arteries.

Mundane - The “normal” world which is not apart of and unfamiliar with vampire culture.

Need - The level of life-force energy needed to sate the “Thirst.”

Nightside - The esoteric and spiritual side vampire world in contrast of the Dayside. This can also refer to “Vampire/Nightside” Family, lifestyle, magic, traditions and culture.

Otherkin - Commonly found around the vampire community are individuals who identify with another mythological archetype such as dragons, elves, faeries, etc. Some vampires consider themselves otherkin, some are not.

Prana - Sandskrit for “Life-force energy” including prana, chi and ki.

Psychic Vampire - A vampire who feeds exclusively on life force energy (chi, prone, ki) to fulfil their Need for a higher level of energy for the average human.

Real Vampire - An individual who identifies as a vampire usually sanguine vampire (blood) or psychic vampire (energy) or in some cases a lifestyle vampire. Also known as a Living Vampire.

Renfield’s Syndrome - “Clinical vampirism” is a mental disorder where the individual has obsession with drinking blood.

Roleplayer - Someone who plays the roleplaying game Vampire the Masquerade or pretends to be a Vampire..

Ronin - A highly solitary and individualistic vampire who is not associated with any organisation, clan, house or court.

Sacred Space - A place where the subtle reality and physical world interact. Usually created during rituals and ceremonies through magic and energy work.

Sabretooths - An individual who has had their fangs personally made by Father Sebastiaan and a member of the Sabretooth Clan.

Sabretooth Clan - The "Family" of individuals who are Sabretooths. The largest and one of the oldest clans in the vampire world. Founded in August 1995 as a "fangclub" for Father Sebastiaan's fang clients.

Sanguine - The latin word for blood. In old terms this means “family” or “of the blood”.

Sanguinarium - Was an international network of courts (local gatherings), households (covens), havens (sacred spaces) and businesses founded in 1995 by the Sabretooth Clan. It was disbanded official in 2015 and the term is sometimes used to refer to the vampire subculture of “real vampires.”

Sanguinarian - An individual who believes they need to drink physical human blood to sate their “Need.”

Shielding - To block or prevent subtle energies, a protective technique learned by many vampires.

Sire - Coming from the game Vampire the Masquerade, this term means “maker”, "parent" or “mentor” within the Vampire Community. Often looked down upon by serious vampires but is becoming more and more commonly used.

Subtle Reality - The spiritual world beyond the five senses including the astral and ethereal layers of reality.

Surface energy - The vital life force energy radiated by the aura, usually just beyond the skin.

Surface feeding - To energetically feed upon the outer layers of the aura.

Sympathetic Vampirism - A temporary need for life-force of a non-vampire and psychic vampire condition created by being fed on too deeply over too long a period of time.

Vampire - Many definitions referring to individuals

Vampirism - Several definitions. 1. the act of feeding on life-force or blood from other individuals. 2. the philosophy of living as a vampire.

Vampire Community - VC is the world wide subculture of individuals who love or identify with the vampires archetype.

Vampire World - 1. the entire vampire community and fandom. A documentary by Father Sebastiaan and Sean Fernald scheduled to be released in 2019.

Vampire the Masquerade - A roleplaying game which has highly influenced vampire culture. Published by White Wolf Entertainment in 1991.

Vampyre - The older Victorian spelling of vampire commonly used in the more old school vampire community. It was originally used to differentiate between lifestyle with a “Y” and fiction with an “I.” However this spelling with a Y has become less and less common in the recent years.