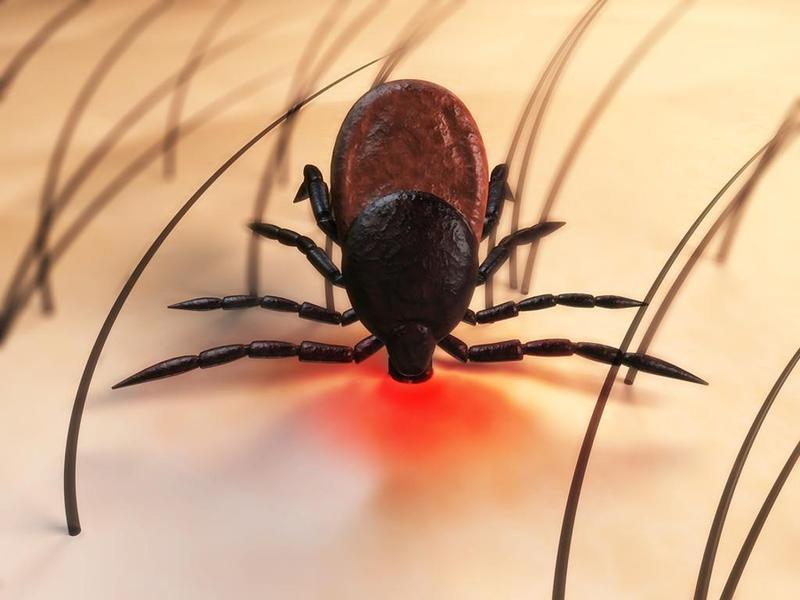 For the sake of brevity, most of the research that we have compiled about Lyme disease is being omitted from this report. We expect to expand upon this topic later. The omissions include how Lyme disease is a U.S. Military bio-weapon that was accidentally released from the Plum Island facility, as was the West Nile Virus, bird flu, swine flu, and others. You may read about the illegal germ warfare program, which dates back to Operation Paperclip, in the book, Lab 257 by Michael Carroll.

Finding useful and credible information about Lyme disease is exceedingly difficult, because those who have done research are usually afraid to talk about their findings. Our research causes us to conclude that weaponized Lyme disease employs a genetically-modified hybrid of syphilis, like the one that was used in the infamous Tuskegee Experiment. It lives in a symbiotic relationship with a microscopic parasite which it nourishes. This explains why the disease is so difficult to eradicate. Attacking only the bacteria without attacking the microscopic worm can enable the worm to flourish, reproduce, and to breed more of the viral component. Therefore, a two-pronged approach is needed to effectively cure Lyme disease. The bacteria and the worm should be attacked at the same time.

There are two stages of Lyme disease. The first stage is acute Lyme disease. It occurs in the first few weeks following a bite from an infected tick. In this early stage of incubation, victims experience the following symptoms.

In approximately 70% of the cases, there is the tell-tale rash that appears soon after the infectious tick bite. The rash appears as a red dot that is inside a red ring, like a target. The symptoms tend to get progressively worse in subsequent months, whereby the condition eventually becomes chronic. Chronic Lyme disease has the following symptoms.

Arthritis-like pain that spreads throughout the joints, most often in the knees and elbows.

Itchy scalp and other parasitic symptoms

Doctors completely forgo testing if Lyme's characteristic rash manifests, because this only occurs with Lyme disease. Otherwise, the tests for Lyme disease are notoriously unreliable, and people often have to diagnose it based solely upon symptoms. The poor reliability of the official tests conveniently gives the medical community its plausible deniability concerning the existence of chronic Lyme disease, because the tests virtually always yield negative results. No reliable test will ever be approved for standard medicine until there is a major change in policy, wherein the existence of chronic Lyme disease is finally accepted. The dilemma for the pertinent regulators is that any reliable test would immediately expose the epidemic, and then the ensuing investigations would reveal that Lyme disease is a bio-weapon that they have been covering-up for decades on behalf of their partner agencies.

The Lyme pathogen may be killed if it is attacked immediately after infestation, or it might simply go into a state of remission. Consequently, the three-week antibiotic therapy that is routinely prescribed by doctors may make the disease temporarily disappear. Doctors then dutifully claim that any resurgence of symptoms is actually the result of another mysterious condition. Whenever patients angrily protest these shenanigans, the next step for doctors is usually to diagnose the patients with delusional disorders. The official tests are used to conveniently affirm a lack of Lyme disease, in the same manner in which they were designed to do.

The important pattern is that chronic Lyme must always be denied, since it is never an allowed diagnosis. Certain doctors have been made into examples for having been truthful to chronic sufferers. They were prosecuted by regulators for diagnosing and treating chronic Lyme disease. Most doctors are too afraid to take the risk.

Astragalus - The idea of using astragalus for a syphilis-like pathogen comes from Traditional Chinese Medicine, and this therapy was verified by American physicians in the early 20th Century (before the A.M.A. took over and eliminated natural therapies). It is known for strengthening the kidneys, liver, and heart. It also drives pathogens out of the lymph nodes, making it easier for the immune system to attack them. Some people who have had chronic Lyme for several years find that astragalus, even in small amounts, provokes too many symptoms, so they opt to forgo its use. However, this is unwise, and astragalus is one of the most important treatments. To understand the side effects, read about Herxheimer reactions discussed herein.

B vitamins - The B vitamins, particularly B-6, B-9 (folic acid), and B-12 (methylcobalamin) are known for healing damaged nerves.

MSM - MSM is a sulfur protein that helps with joint pain, and it assists in repairing nerve damage. A standard adult dosage is 1 gram daily (1,000 mg.). Do not confuse it with M.M.S., which is a dangerous fraud.

Food cravings - It would be wise to satisfy specific food cravings, because the body likely knows what it needs. It is also important to remember that children may take advantage of this suggestion, and suddenly "crave" ice cream constantly.

Colloidal silver - This is a natural and general purpose anti-fungal, anti-bacterial, and anti-viral. It works electrically instead of chemically, so pathogens cannot develop any resistance to it. A reasonable starting amount would be 1 fluid ounce that is taken twice a day. An ounce is equal to two U.S. tablespoons. For maximum effect in the bloodstream, it should be held in the mouth for a minute before swallowing. If the patient gets noticeably sicker, then you need to immediately decrease the daily amount. Later, you should increase the dosage, but you must not increase it too rapidly, due to the toxic die-off reactions. One method of determining the ideal therapeutic amount would be to increase the dosage every day until the patient gets slightly sicker, and then cut back to a dosage that is slightly lower than that amount. Then use this ideal dosage for a couple of weeks before trying an increase again. Read the article, Making and Using Genuine Colloidal Silver, to learn how to make your own, because bad colloidal silver is worse than none at all.

High salt diet - Use unrefined natural sea salt in all meals. If it is bright white, and therefore stripped of minerals, then it should be avoided. Good salt can only be found in health food stores and online. The extra salt will make the body inhospitable to pathogens, and it will simultaneously give better penetration to the colloidal silver, making it more effective. Unrefined sea salt also contains trace minerals that will help to negate the negative effects of increased sodium. Extra salt has the benefit of making a patient drink more, and keeping fluids circulating. Having Lyme disease and a high salt diet will make high blood pressure very likely. Just be watchful that it does not become dangerously high.

High fat diet - Healthy fats are necessary to protect against central nervous system damage, and to heal any existing nerve damage. A key component of the Budwig Protocol, which involves mixing flax seed oil with something containing sulfur proteins, like full-fat yogurt, goat cheese, or cottage cheese, would be very beneficial.

Echinacea - This is well known for its efficacy in removing venom from the body. It is a very common treatment by those who are fighting Lyme disease, for this reason. Do not begin taking echinacea until the correct colloidal silver dosage is determined, else it will be impossible to determine if the worsening symptoms are due to echinacea or silver. Echinacea is known for making people feel worse for a short time after taking it, followed by them feeling much better. Due to this, it should be taken only once each day. Break from using the echinacea after three weeks, because it will lose its effectiveness. Stop taking it for a week, before restarting for another three week period.

Chlorophyll - This provides the body with better oxygen absorption, which will support the body overall. In addition, it provides a safe amount of copper, which will make the body more toxic to pathogens. It will also give the colloidal silver better penetration, because silver will electro-chemically bind with the copper that is inside the chlorophyll.

Niacin - Otherwise known as vitamin B-3, niacin can increase the deep tissue penetration of the other treatments, especially colloidal silver. Niacin is an unusual supplement with unusual effects, so read the article about niacin before using it. We recommend that people not use more than 100 mg. daily.

Gotu kola - Historically, gotu kola was known for its toxicity to syphilis, so it can be assumed that it will help to kill Lyme pathogens. Gotu kola is typically supplemented using dosages of 500 mg. per day, but if it causes strong Herxheimer reactions, a lower dose is prudent.

Ginkgo biloba - This is used to clear the mental fogginess that is a common symptom of Lyme disease. The standard dosage for an adult of average build is 120 mg. daily.

Bentonite clay - Make a paste out of bentonite clay, and rub it over the spine every day. Lyme disease pathogens are known to congregate around the spinal column. Bentonite clay can somewhat penetrate the skin to cleanse venom and toxins out of the body, so it may be helpful in removing the die-off toxins.

Most commonly referred to as simply "herxes" or "Herxheimer reactions", this is when toxic die-off wastes result from the death of spirochetal pathogens. The name was given by Karl Herxheimer, who noticed this reaction when studying syphilis. When it dies, endotoxins are released. Whenever this occurs at a rate faster than a body can flush the wastes; fever, chills, rigor, muscle pain, hyperventilation, skin flushing, and a worsening of skin lesions can result. Due to these reactions, Lyme treatments can often make the symptoms worsen before they get better. It is important to differentiate this phenomena from a worsening of the actual condition. This reaction should be anticipated in any effective program.

Lyme disease is a serious condition, and it is often permanent when it is treated with standard care. This is due in part to the fact that doctors usually deny the existence of chronic Lyme disease (most cases), and they categorically ignore the parasitic component. Symptoms which continue after two to three weeks of antibiotics are labeled as "Post-Lyme Syndrome", and victims are instructed to ignore future symptoms. Patients who do not comply in being silent are frequently accused of having mental illnesses, and they are then treated psychiatrically for the sake of medical political correctness, and to suppress meaningful investigation into what is really happening. It is the way that the U.S. Department of Defense wants to keep things. Curing Lyme disease is not easy, and it may require long-term dedication. To ensure success, the recommended protocol should be continued for three months after all symptoms subside. There has been some success in curing Lyme disease with standard therapy, for cases which were caught early enough, but only similar alternative therapies will work for well-established infections.