Home/Articles/Light As Medicine — Scientists Explain How It Benefits Our Mood, Skin, and Health

Light As Medicine — Scientists Explain How It Benefits Our Mood, Skin, and Health 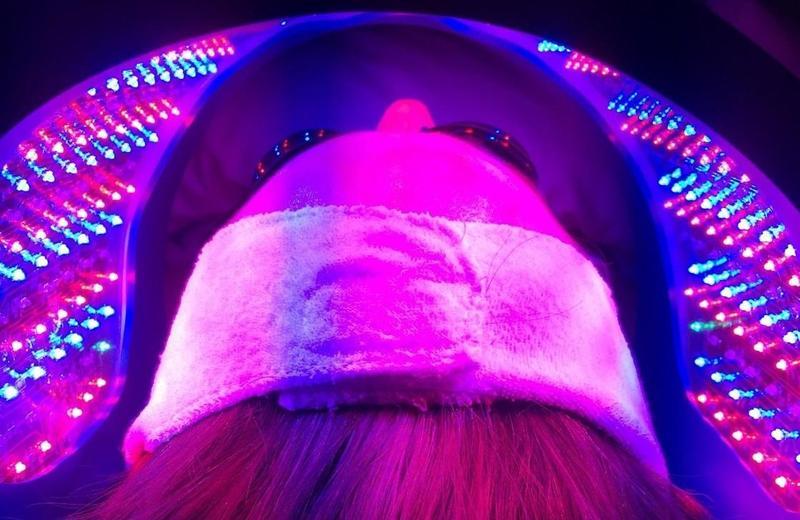 In the 30 years since Donna Keller-Ossipov had her first migraine, she’s tried everything from pills to Botox to keep the crushing headaches at bay. They’ve come every few days anyway, forcing her to retreat to a dark room, nauseated and incapacitated.

So when Keller-Ossipov learned of a clinical trial testing “green light therapy” for migraine, she didn’t hesitate to sign up. Months after the study ended, she still bathes herself in the green glow of a portable LED light 2 hours per day, setting it next to her as she winds down at night. She hasn’t had a migraine since spring.

The trial, at the University of Arizona, is among dozens of ongoing studies exploring whether exposing the skin or eyes to specific wavelengths of light can help treat health problems. At Massachusetts General Hospital, researchers are studying whether a red light-emitting helmet can help traumatic brain injury patients recover. At the University of California, San Francisco, scientists are studying whether a similar device can stall mental decline in people with Alzheimer’s disease. Dermatology offices and high-end spas routinely use light therapy to ease skin problems. And thanks to the recent availability of low-cost, heat-free (and thus safer) light-emitting diodes (LEDs), there are more do-it-yourself gadgets for treating acne, depression, and pain online.

“Instead of trekking to the doctor’s office to have light shined on them, consumers can now shine light on themselves at home. The light is basically the same, there are few safety issues, and it is a fraction of the cost.”

As far back as the early 20th century, doctors placed patient beds on sunny balconies as treatment for rickets or psoriasis. In 1903, physician Niels Finsen won the Nobel Prize for inventing a giant lamp to treat skin tuberculosis (lupus). In the 1920s, Olympic athletes bathed beneath UV rays before races to boost performance.

So-called phototherapy fell out of favor when medications and rising fears about skin cancer came along. But in the past decade, with the rise of lower-cost lasers and LEDs that deliver precise wavelengths with minimal skin-damaging UV rays, the practice is coming back. U.S. consumers spent $309 million on light therapy in 2016, and the global market is projected to grow 5% annually in the next decade, according to a new report by Future Market Insights.

But how, exactly, does it work?

As Hamblin explains, people — like plants through photosynthesis — have a chemical reaction to light.

When particles of light hit the skin, they’re absorbed by light-sensitive molecules inside cells, which kick-start a response. That response varies, depending on the wavelength, or color, of light and where it’s used.

For instance, when longer wavelength or visibly “red” light hits the skin, it nudges mitochondria (the cell’s powerhouses) to make energy more efficiently and boost production of healing anti-inflammatories or disease-fighting antioxidants. The light is a “very mild form of stress that activates protective mechanisms in the cells,” says Hamblin, who's also principal investigator at the Wellman Center for Photomedicine

If the light comes through the eye, it stimulates nerves that lead from the retina to the brain. That influences production of neurotransmitters like serotonin and dopamine, which affect mood, explains Raymond Lam, MD, a researcher from the department of psychiatry at the University of British Columbia.

Shorter wavelength or visibly “blue” light is very good at making you wakeful. When it enters the eye, it hinders production of melatonin, which helps with sleep.

Light Therapy For Skin And Mood

The most common and accepted medical uses are in dermatology. Because of the way it fights bacteria, blue light is routinely used in doctors' offices to treat acne, while red light is applied for treating wrinkles.

Doctors say inexpensive home gadgets are typically safe, if patients follow directions to wear protective glasses and stay out of the sun after treatment when needed. But they are not likely to work as well as professional treatments. (In the office, doctors often apply a cream to make the skin more sensitive to the light.) At-home gadgets may not help more severe cysts and blackheads, says Feely.

“As long as people have realistic expectations, I think these devices can be a great adjunct to existing treatment tools.”

To boost mental health, doctors have used tabletop white or blue light boxes primarily to treat seasonal affective disorder, a form of depression that tends to hit when days get shorter and bright natural light can become scarce. The theory: By using artificial light to promote alertness by day, the treatment can reset an off-kilter biological clock, restoring regular sleep patterns and boosting mood.

Lam’s research suggests that people who have nonseasonal depression can benefit too, possibly by boosting production of feel-good neurotransmitters when they look into the light.

One 2015 study compared four groups: a placebo group; a group that spent 30 minutes per day exposed to a 10,000-lux fluorescent light box (about the brightness of morning summer light); a group that took antidepressants daily; and a group that did both.

After 8 weeks, 29% of the antidepressant group felt better (less than the 33% of the placebo group), while 50% of the light therapy group and 76% of the combo group improved.

People with bipolar disorder should steer clear of light boxes, as they can aggravate mania, Lam says. But he often prescribes light therapy alongside medication for patients with depression.

“Most people think of light therapy as something for winter depression only. The idea that it might work for nonseasonal depression is less well-known.”

When it comes to using light therapy for other serious diseases, skepticism is high, research in humans is scarce, and results are mixed.

But Hamblin, who has been studying light therapy for 30 years, believes that with the right doses, wavelengths, and techniques, it holds a wealth of unrealized promise for widespread disorders like chronic pain and decline in memory and thinking skills.

One review of 16 trials totaling 820 patients found that near-infrared light (a slightly longer wavelength than red) applied to the skin eased neck pain immediately after treatment and for weeks to follow. The market has since been flooded with light therapy pillows for neck pain.

Another small study of patients with dementia found that when they wore a device that gives off near-infrared light to the skull and inside the nostril for 20-25 minutes daily for 12 weeks, they did better on memory and thinking tests. Larger trials are in the works.

Meanwhile, Mohab M. Ibrahim, MD, director of the pain management clinic at University of Arizona, is focusing the bulk of his research on green light, which has a slightly longer wavelength than blue, for chronic pain.

His research has shown that when rats are exposed to green LED light through the retina, it boosts production of natural painkillers called enkephalins in the spinal cord.

That could be why, in a preliminary trial in humans, patients with migraine like Keller-Ossipov reported fewer or less severe attacks.

Ibrahim cautioned subjects never to use the light during a migraine (light exposure can aggravate them) but rather to use it daily for 10 weeks to prevent them.

“This is still very experimental, and more research is needed,” stresses Ibrahim. “But we are very excited by the results.”

Since starting the green light therapy, she has cut her medication in half, discontinued her Botox treatments, and been able to go back to school to get a master’s degree.

“I can tell you one thing,” she says. “I’m not giving that light back.”