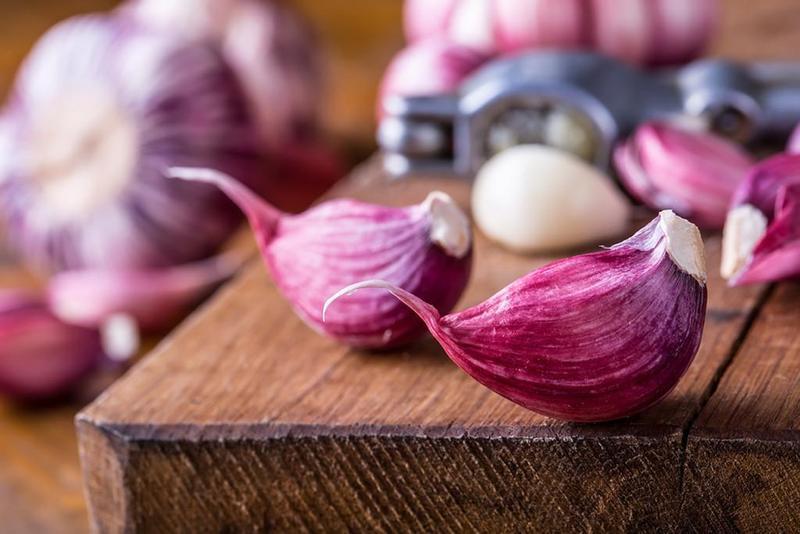 Garlic has been an important herbal remedy for centuries. Painted on the walls of Egyptian tombs and placed in the tombs, for consumption in the afterlife, as early as 3700 BC, garlic was used as a remedy for heart disease, cancer and other ailments, as documented in ancient Egyptian medical documents, dating from 1550 BC.

Modern science validate many of the medicinal benefits of garlic and its potential to help lower risk factors for a wide range of conditions, many age related, that include cardiovascular and neurological diseases and cancer. Cancer-preventive actions of garlic and Aged Garlic Extract™ (AGE), an odorless natural garlic supplement made by Wakunaga of America (Kyolic® AGE) are documented in experimental models and in humans. The underlying mechanisms of garlic protection, shown mostly through research using AGE, are largely due to its potent antioxidants, a high content of organosulfur compounds, an ability to enhance immunological protection, detoxify carcinogens, reduce inflammation and help prevent cancer— causing mutations.

A fact sheet from the National Cancer Institute http://www.cancer.gov/cancertopics/factsheet/prevention/garlic-andcancer-prevention concludes the following:

“Several population studies show an association between increased intake of garlic and reduced risk of certain cancers, including cancers of the stomach, colon, esophagus, pancreas, and breast. In analyzing results from seven population studies, investigators showed that the higher the amount of garlic consumed, the lower the risk of stomach and colorectal cancer.

A large prospective study, the Iowa Women’s Study, investigating the role of diet and other risk factors in cancer incidence in older women, showed a strong association between garlic consumption and reduced risk for colon cancer. Women who consumed the highest amounts of garlic had a 50 percent lower risk of cancer of the distal colon compared with those who had the lowest level of garlic consumption.

Several population studies conducted in China centered on garlic consumption and cancer risk. One of the studies showed that frequent consumption of garlic and various types of onions and chives was associated with reduced risk of esophageal and stomach cancers, with the greatest reduction in risk seen in the higher levels of consumption. Another study found that consumption of allium vegetables, especially garlic and onions, was linked to a reduced risk of stomach cancer. In a third study, greater intake of allium vegetables, especially garlic and scallions (more than 10 grams per day) was associated with approximately 50 percent reduction in prostate cancer risk. Evidence also suggests that increased garlic consumption may reduce pancreatic cancer risk. A study conducted in the San Francisco Bay area found that pancreatic cancer risk was 54 percent lower in people who ate larger amounts of garlic compared with those who ate lower amounts.

In addition, a study in France found that increased garlic consumption was associated with a statistically significant reduction in breast cancer risk. After considering total calorie intake and other established risk factors, breast cancer risk was reduced in those consuming greater amounts of fiber, garlic, and onions.

A recent epidemiological study from China has shown that there is a protective association between the intake of raw garlic once or twice a week and lung cancer, and that the effects were related to dose. The authors suggested that garlic might have potential in preventing lung cancer but that the effective components in the lung cancer prevention effects are unknown.

Garlic intake may not be for everyone, as its lingering smell and its potential gastric side effects, such as flatulence and diarrhea prevents many from consuming fresh garlic, depriving them of its benefits. Aged Garlic Extract (Kyolic AGE, Wakunaga of America) is an odorless and natural garlic supplement, produced from fresh organically grown garlic, by a lengthy process of aging and extraction, at room temperature. The harsh unstable substances found in the fresh bulb, such as allicin, the source of garlic’s odor, are converted into stable compounds such as S-allyl cysteine, the major water soluble organosulfur compound in AGE, used to standardize AGE, and S- allyl mercaptocyteine, unique to AGE. AGE has been the major form of garlic used in research on its health effects, reported in close to 700 scientific and clinical studies. Rich in organosulfur products with high antioxidant and anti-inflammatory activities, AGE has shown in experimental models and in clinical studies to help protect against pathological and age-related conditions, many associated with free radical damage and inflammation. These include cancer, atherosclerosis and cardiovascular disease, and neurodegenerative diseases such as dementia, its main form being Alzheimer’s disease. AGE has been shown to boost the immune system and promotes the metabolism and detoxification, ridding the body of carcinogens and other toxic products.

The anti-cancer effects of AGE have been widely reported in model systems. Among these findings AGE and its constituents inhibited colon cancer in a dose-dependent manner and stimulated an enzyme known to assist in detoxifying many carcinogens in the liver and colon, glutathione S-transferase. AGE and its components are effective anti-cancer agents by acting in various ways. Their high antioxidant content scavenges free radicals that can trigger cancer-mutations in DNA; other actions include blocking carcinogen binding to DNA, preventing mutations and detoxifying carcinogens. AGE also plays a role in killing cancer cells, by apoptosis, a programmed cell death and by enhancing the action of immune cell that attack cancer cells, the natural killer cells.

Epidemiological have shown the cancer preventive effects of garlic; model experimental studies have found that AGE and its compounds, such as S-allyl cysteine, S-allylmercaptocysteine and alxin have anticarcinogenic effects; yet, the effects in humans had to be established by a clinical study. A double-blind, randomized clinical trial was carried out by Tanaka and colleagues. The investigators used high levels of AGE (2.4 ml/ day) as an active treatment and low-doses of AGE (0.16 ml/day) as a control, on 51 patients with colorectal adenomas (polyps), non-malignant tumors that can develop into metastatic cancer. The study randomly assigned patients into one of the two groups of AGE content, after removing adenomas that were larger than 5 mm in diameter.

Using colonoscopy, the investigators determined the numbers and sizes of the adenomas, prior to giving the patients AGE (0 months) and later, at 6 and 12 months after beginning the intake.

Thirty-seven patients (19 in the active group, 18 in the control group) completed the study. The findings were that in the control group, given the lower levels of AGE, the number of adenomas increased linearly from the beginning of the study (baseline); by contrast, the group given the high dose of AGE showed that after 12 months of intake, AGE suppressed both the size and the number of the adenomas in a statistically significant manner. These striking results showed that the garlic supplement Kyolic AGE has potential to protect humans against colon cancer, by preventing the progression of colorectal adenomas into the full-blown colon cancer.

EVALUATION OF THE RESULTS

The clinical study showing that Kyolic Aged Garlic Extract prevented the development of cancer from non-cancerous lesions is an important finding that supports the results of epidemiological studies showing that consumption of garlic reduces gastrointestinal cancers, when taken in high doses. Not everyone is attuned to taking high doses of fresh garlic, the odor remains on the skin and breath and fresh garlic can produce unpleasant gastrointestinal adverse effects, not to mention the anti-social consequences.

The clinical study showing that AGE inhibits precancerous adenomas and potentially prevents their development into colon cancer is a quantitative study, supported by the excellent standardization of AGE’s active ingredients. This is an improvement over studies evaluating the effects of fresh garlic cloves, where garlic intake cannot be standardized in the same way. Also, garlic bulbs may contain up to 33 different lipid and water-soluble organosulfur compounds, with each having a different potential inhibitory effects on cancer, as shown in laboratory studies; the doses, that is the number of cloves that would be required in humans to have an inhibitory effect on colon cancer are unknown.

By contrast, AGE compounds such as S-allyl cysteine, the most prevalent compound in AGE has a 98 percent bioavailability experimentally and can be used potentially as a marker to reflect the intake of aged garlic extract components.

Cancer is a multistep process that has genetic components that are inherited but it also is a disease that is initiated and/or promoted by environmental factors and some metabolic effects, such as free radicals and oxidation. The intake of fresh garlic as a condiment and supplementing the daily diet with odorless Kyolic AGE, are effective approaches to help protect against the onset and development of some forms of cancer.