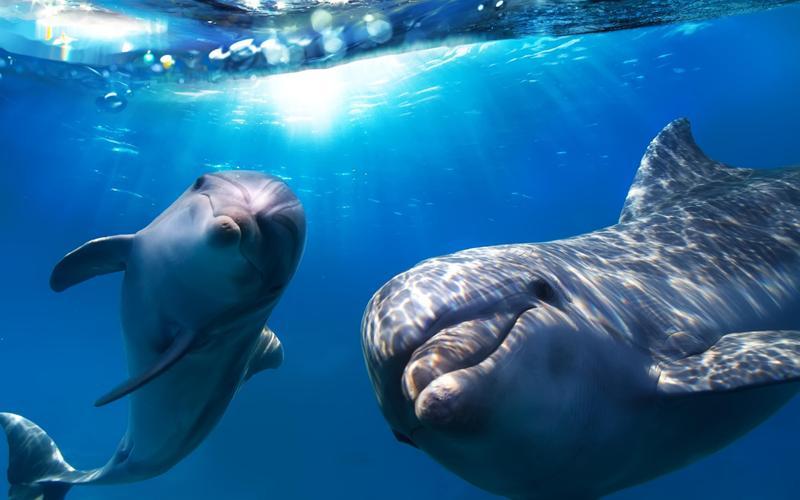 You have probably heard of dolphin therapy and there might even be a dolphin therapy near you. However, not many of us have actually tried this type of therapy or know much about it. Dolphin therapy is any kind of intervention (treatment or service) which involves dolphins.

There are many different kinds of dolphin therapy. The dolphin therapy is mostly used for the treatment of children. The simplest involve the child swimming with, touching or 'looking after' dolphins.

The more complex therapies, such as Dolphin-Assisted Therapy (DAT), are based on structured programmes which are designed to meet the needs of the individual child.

In DAT the child is encouraged to complete one or more pre-determined tasks, such as placing a ring on a peg or saying a word. If the child completes the task to a satisfactory standard, they are rewarded by being allowed to interact with a dolphin.

This interaction may include touching or kissing the dolphin, or getting into the water and taking a ride holding onto the dolphin's dorsal fin.

Aquatic therapy has long understood that being in the water has a therapeutic effect on people with varying types of disabilities (McKinney, A; Wolf, R.; 2001). Being in the water allows people that are in wheelchairs, freedom in movement otherwise not experienced. To this benefit include dolphins. Dolphins have been cited as having special capabilities that enhance healing potential in people with disabilities (Johnson, L.; Bourne, R.).

Dolphin assisted therapy dates back to the 1950s and the work of Dr. John Lilly, who studied the effects of dolphins on individuals with disabilities (McKinney, A; Wolf, R.; 2001). In the late 1980's, Dr. Stephen Joszef, co-founder of Living from the Heart also carried out a neurological research study that shed valuable light on the mechanism of action for this most delightful and effective therapy.

There is a wide variety of reports on people who benefit from this therapy. People with non-verbal or communicative disorders have found positive results in working with dolphins. Children with special needs including autism and cerebral palsy, etc., are a unique focus to many programs. There has also has been recent research for people experiencing depression or anxiety. This spans young and old, and a variety of illnesses, sicknesses, or diagnoseScientists believe that a brain-wave shift of this nature strengthens the human immune system. Furthermore, after a dolphin encounter, research has shown a synchronization of brain-wave activity between the logical, analytical left brain and the intuitive, imaginative right brain. s.

Perhaps the most profound changes from dolphin therapy are in children with autism and similar challenges.

-90% become calmer and more focused and attention span is increased

-75% of the parents of children with autism indicated an improvement of eye contact, smiling, laughing and touching

-75% have improved emotional behavior, confidence and self-esteem after dolphin therapy.

Dolphins measure 8 to 10 feet in length; weigh an average of 400 pounds, swim up to 35 miles per hour. Dolphins are gentle in demeanor, graceful in the water, and appear friendly and communicative (McKinney, A; Wolf, R.; 2001) and have the capability to heal through presence and interactions.

The emerging field of psychoneuroimmunology; that is the study of the interactions between the nervous, the endocrine and the immune system is a fascinating area of research.

Scientists believe that the dolphin’s ultrasound emissions have considerable healing potential from an energy and informational perspective. Clinically, ultrasound has been used to promote healing, for diagnostic imaging, and to destroy cataracts and kidney and gallstones. Throughout history, sound - such as music, drumming and chanting - has been used to promote health. Physiologically, we now know that these sounds can influence heart rate, breathing, muscle contractions, memory, and immune function. In terms of energy, the dolphin’s ultrasound blast is four times stronger than therapeutically used in hospitals.

Furthermore, this blast is delivered through water, which is 60 times more efficient than air for sound transference, to a body that is three-quarters fluid. It is believed that ultrasound resonance within the cerebrospinal fluid is especially important due to the fluid’s key influence on the brain and spinal cord.

An interesting observation made by Dr. Steve Jozsef of Living from the Heart, and David Cole of the Aquathought Foundation was that human brain waves shift from high-frequency beta to low-frequency alpha/theta waves after a dolphin encounter.

For the sake of reference, people exhibit theta waves in the fleeting moments when they drift from consciousness into sleep. It is a rare state that has been implicated in the "psychoneuroimmunology response'; the relationship between the nervous, endocrine and immune systems.

Theta brainwaves are associated with insight, intuition and a feeling of connectedness to others.

David Cole speculates that these brain-wave alterations are facilitated by sonar-induced cavitation.

In turn, these bubbles facilitate the transport of key neurological molecules from outside to inside neurons.