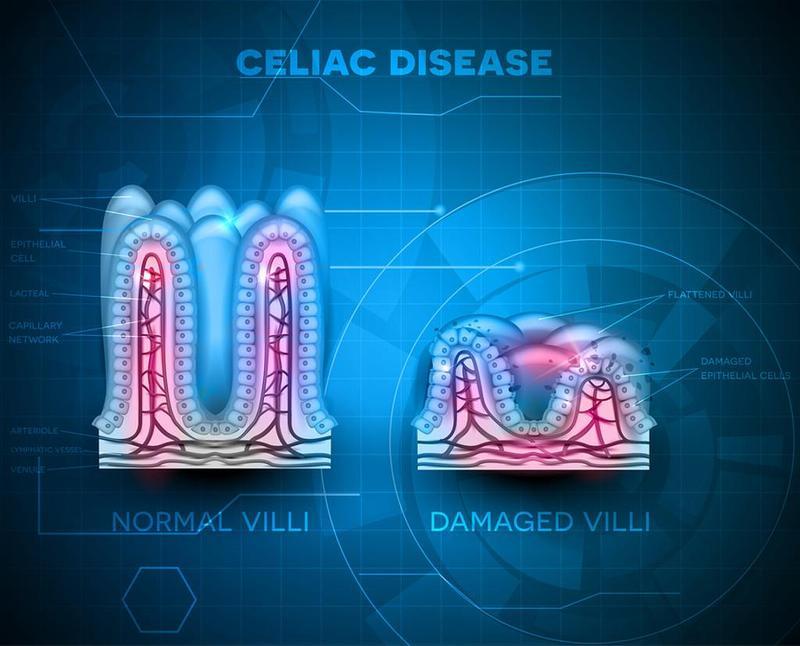 Celiac disease effects about 3,000,000 people in the United States, and it becomes more prevalent each year. As with practically all modern epidemics, lifestyle and diet are very closely related to it.

Celiac disease needs not be as horrible as the medical establishment portrays it to be. It is easily treatable and completely curable, with minimal cost. The rate of recovery depends upon the severity of the case, and how religiously a patient adheres to the treatment protocol. With proper treatment, it takes between one and five years for a complete recovery, but vast improvements in a patient's quality of life can be expected much sooner.

A Description of Celiac Disease

In the intestinal tract there are living microbes. The good bacteria are called flora, and the harmful microorganisms are called candida albicans (yeast). In health, the candida is overrun by the flora. Flora keeps the yeast in-check in a healthy individual. However, this ideal state is not common nowadays. With celiac disease, there is often so much candida (yeast overgrowth) in the intestinal tract that the immune system begins attacking the intestinal tract itself, because this part of the body is detected as being dangerously toxic. Celiac disease is exactly this panic response. For people suffering with it, starchy (glutenous) foods are especially aggravating to their already inflamed immune systems. These foods are likely to trigger hyper-immune responses amongst such people, to cause extreme irritation and gastrointestinal spasms. The disease makes the digestion of fats especially difficult too.

The immune systems of celiac patients are so overdriven, that their risks of developing other serious heath problems, including cancers, are increased significantly. The risks are especially high when they are trying to suppress celiac symptoms with pharmaceuticals. Therefore, eliminating celiac disease naturally will yield far-reaching benefits into the future.

Celiac disease (celiac sprue, or gluten sensitive enteropathy) is incorrectly described as an "autoimmune disorder" by the allopathic medical establishment. There is actually nothing wrong with the autoimmune system, because the autoimmune system is doing exactly what it was designed to do: protect the vital organs from toxins and pathogens. We should thank God for such "autoimmune disorders", for without such aggressive responses, the patient would quickly die.

The cause of celiac disease is officially unknown, despite it typically being seen after crises which decrease a body's flora and immune system; such as after a pregnancy, surgery, severe emotional crisis, or pharmaceuticals. These causes seem appropriate from what we know about celiac disease. The orthodox establishment is correct about attributing it to the small intestine. In our bodies, the small intestine is responsible for the absorption of food nutrients. When someone with celiac disease ingests foods which contain gluten, his body produces antibodies that attack the small intestine, and in particular, the villi.

The villi are tiny hair-like projections that line the small intestine and siphon nutrients into the blood stream. Without healthy villi, a body is unable to absorb the proteins, carbohydrates, fats, vitamins and minerals that it needs; regardless of how much is eaten or the quality of foods. The nutrient deprivation caused by an untreated case of celiac disease inevitably leads to malnutrition and secondary health problems.

Curing celiac disease depends on repopulating the intestinal tract with helpful flora. They aid in digestion; allowing for the proper absorption of nutrients. They starve the destructive yeast. Regardless of how much one eats, a continual state of yeast overgrowth will leave a victim malnourished, low in cellular oxygen, low in energy, susceptible to infections, and full of yeast waste products.

How History Was Ignored and Rewritten

By the late 1940's, Dr. Sidney Valentine Haas was well-known for his treatment of celiac patients with the Specific Carbohydrate Diet, a dietary plan which eliminates the indigestible (to a celiac patient) processed carbohydrates in grains, sugars, and homogenized milk products. Without these aggravating factors, the intestine will heal itself within as little as a year, relieving all sign and symptoms of celiac and other intestinal disorders.

Despite great success with his patients and some acclaim, Dr. Haas' theory of celiac disease was overruled by a 1952 Lancet report (based on only 10 test subjects), which suggested that gluten protein intolerance might be "the real culprit" of celiac disease. Researcher Elaine Gottschall concluded that over simplicity was an attractive factor for the medical community's linking of celiac disease with gluten intolerance, which sadly continues to the present day.

Gluten intolerance is hardly enough to explain celiac disease, since not all symptoms disappear when gluten is eliminated from the diet. In some cases, avoiding gluten alleviates many of the most troubling symptoms, but there is no healing in the small intestine, which makes patients highly prone to having additional problems at a later date. As seen with most diseases, this provides another example of the medical establishment simplistically treating symptoms, without making any good faith efforts to cure. Gottschall explained that the allopathic regimen does not result in healing the intestinal wall, but she was ignored. Celiac patients who avoid all gluten still continue to demonstrate deformed cells in the intestinal wall -- an unmistakable indication that something in the body is still out of balance -- that there is still a state of dis-ease.

When a person successfully avoids all chemically-processed starches and the polysaccharides (complex sugars) which aggravate celiac (and various other intestinal conditions), his body's intestinal wall will actually heal itself. Cells will repair and test normal after a period of one to five years on the diet.

According to the research of Dr. Haas, and his son, Dr. Merrill P. Haas, the cause of celiac disease is not gluten, but chemically-bastardized sugars. Certain complex carbohydrates have a structure making them difficult for the digestive system to break down. These disaccharide and polysaccharide sugars are left unabsorbed in the intestine, feeding pathogenic fungus and fueling inflammatory damage to the intestinal wall.

How To Cure Celiac Disease

These things can be accomplished merely through nutritional changes, but herbal supplements can help to accelerate the process. Items should only be purchased from a health food store or reputable online source, because the supplements found in major retailers have potency and quality issues.

The treatment suggestions below may seem overwhelming at first glance, but the critical supplements are marked with a red bullet.

Apple pectin is used to remove unwanted toxins and heavy metals (mercury, lead, aluminum, etc.), lower cholesterol, and reduce the side effects of exposure to radiation. It was used after the Chernobyl nuclear disaster to remedy radiation poisoning. Apple pectin is a good source of soluble fiber. It has the ability to form a gel which can bind water and toxins together, while at the same time also bulking the stool and carrying the toxins out of the body.

Marshmallow root controls and soothes inflammation and irritation of the alimentary canal.

MSM is concentrated in connective tissues. It promotes structural repair.

Aloe vera extract has the ability to move deep into damaged tissues to promote repair, and it is a mild laxative.

Dandelion can be used in tea form for best absorption, or it may be obtained in supplemental capsules.

Stop all hormone therapies, and especially do not take birth control pills. Candida thrives in high levels of progesterone.

Avoid all products with soy.

Colloidal silver would be extremely beneficial in speeding up the process, especially in the beginning.

Garlic is an anti-microbial and will help fight and kill bacteria, fungus and infections in the gastrointestinal system. Use copious amounts.

Use only gray-colored sea salt from a health food store, and avoid toxic table salt. Do not trust the white "sea salt" found at most retailers, because real sea salt is never white in nature. In fact, only buy supplements from regular retailers (instead of health food stores) when you are really desperate. Avoid retailers like GNC, as well. The sodium will make the body more alkaline, as well as help it to move fluids, which is necessary for the removal of toxins.

Cayenne pepper can be found in capsule form.

Consume a tiny amount of extra virgin, cold-pressed coconut oil daily, if it can be tolerated. If it cannot be tolerated, then try again when celiac disease becomes less severe.

The ideal diet for curing celiac disease has no sugar, limited alcohol (particularly beer), no mushrooms, limited yeast and reduced caffeine. Meat, vegetables, whole wheat carbohydrates, and non-homogenized milk products are fine, but flour products must be whole wheat. Foods should be organic whenever possible. All processed foods should be avoided, and artificial sweeteners should never be used as sugar substitutes. Natural sweetener substitutes such as honey and stevia are fine. Honey is especially beneficial.

Yogurt will stimulate the existing beneficial intestinal flora, and add good bacterial reinforcements. Use only plain yogurt without flavorings or sugars. Organic yogurt is best. Yogurt will also suppress the bad bacteria at the same time. Yogurt is absolutely critical. Use two tablespoons five times a day if possible.

Supplement with essential fatty acids, such as those from flax seed oil (transforms into omega-3 during digestion) in combination with foods containing sulfur proteins, such as yogurt, eggs, fish, sesame paste, nuts, garlic, cottage cheese, and onions. Omega-3 works best when combined with sulfur proteins. Research the Budwig protocol for information about this therapeutic and effective anti-cancer diet.

No canned or processed meats. Organic is preferred.

No canned or processed vegetables. Organic is preferred.

Do not consume any undersea vegetation, such as kelp or seaweed.

Vitamins A, E, folate (folic acid), and the mineral zinc participate in beneficial antioxidant functions to reduce oxidative stress in the cellular lining of the gut. In this manner, they assist in the overall repair process. Some of the gut barrier functions, such as IgA secretion, can be enhanced by these vitamins.

Make your body as alkaline as possible. Reference our article, Body pH and Disease, and our pH food chart.

We recommend several glasses of lemonade or pineapple juice per day, because the minerals in these juices will actually counteract the acids of the body after the digestive process. The juices themselves have naturally-occurring sugars which are more beneficial to flora than yeast. If sugar is used to sweeten, then use only evaporated cane juice crystals, for most "pure" sugar is adulterated. The amount of sugar needed can be greatly reduced by adding a pinch of baking soda.

Pure fruit juice in moderation is okay to quell cravings for sweets. Make sure it is pure. It must have no added sugar, or high-fructose corn syrup. Be wary of "cocktails" and juice from concentrate.

Drink spring water, or water which has been filtered through a Berkey water filter having fluoride removal add-ons. Fluoride should be eliminated as much as possible, so in addition to filtering the water, patients should use fluoride-free toothpastes. In order to neutralize fluoride in the body, iodine may be applied transdermally, as described in the iodine report.

Avoid microwaved foods, because they are nutritionally depleted. People with celiac disease are already somewhat malnourished.

Those who proceed rapidly may actually feel sicker before they feel better. This is because the yeast cultures will release toxins as they die -- literally rotting inside the patient and releasing ammonia compounds. Therefore, it is important to increase fluids, especially if the patient feels sick or weak. We recommend green tea as a stimulating drink during recovery, and perhaps some ginseng. Fluids will aid the body in expelling the dead pathogens. Feeling sicker initially is often a side effect of alternative medicine, because alternative medicine treats the causes of illnesses, instead of merely managing symptoms, as the medical industry does.

by Sarah C. Corriher For Healthwyze