The Enneagram and the Tarot Part One: The Wands 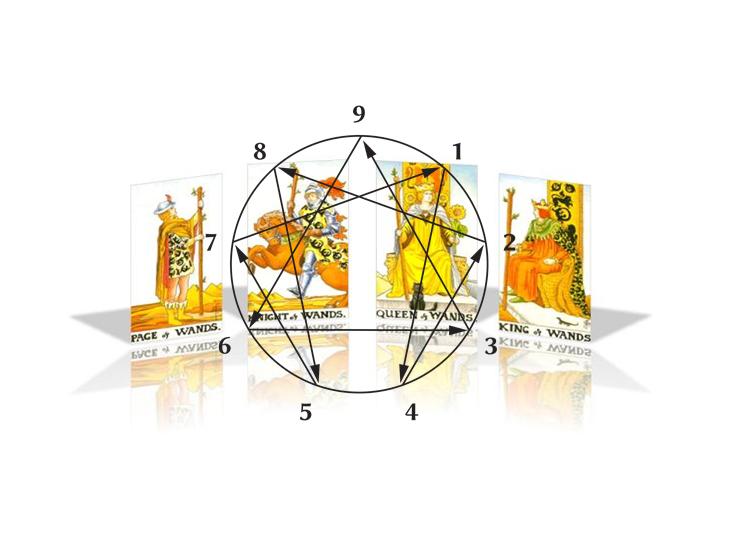 The Enneagram and the Tarot both allow us to put language to our self discovery. The Enneagram categorizes your fears and desires in order to help you grow and become your best self. Similarly, the Tarot is a tool for inner guidance and is used to uncover and name your deepest beliefs, challenges, and motivations. Where the two intersect, there is potential for very powerful, very personal messages.

The Tarot is as complex as it is beautiful, but the cards have three general purposes:

1)The Major Arcana help you to examine the universal truths within your situation.

2)The Minor Arcana (ace through ten) allow you to explore your actions and choices.

3)The Court Cards assist you in understanding your fears and motivations.

The Enneagram, on the other hand, is a set of nine distinct personality types defined by a person’s core fears and core motivations. All people display all nine types in some form, but we each have one core Enneagram number that drives us. By exploring the Enneagram you can deepen your understanding of your reactions to the world around you. There is a clear parallel between the language of the Enneagram and the court cards within the Tarot.

The wands in tarot represent fire, creativity, innovation, momentum, opportunity, and the spotlight. Much like flames, the wands have high energy, high heat and are always moving. In the Enneagram, Threes are known as “The Achievers.” They feel the need to prove themselves through action and success. Threes equate their value with their achievements. Michael Jordan, Taylor Swift, and Oprah are all prime examples of Enneagram Threes.

Upright, the Page of Wands represents the positive attributes of threes and fours in the Enneagram. Their explosive creativity is about to take the world by storm! The Page’s infectious enthusiasm is contagious and motivates those around them. They are sociable, friendly, and know how to work a room. They push themselves to be the absolute best, and they aren’t going to settle for less. Advancement, originality, and big goals are all important to the Page of Wands. They are very aware of their own image and how others perceive them. The Page, so focused on their creative pursuits, want to be unique and extraordinary. A creative task is only worth doing if it has never been done before. The Page of Wands often feels that they are the only one who could achieve this feat.

In reverse, the Page of Wands can represent the unhealthier side of threes and fours. The Page of Wands fears being worthless and being ordinary. They might have limiting beliefs about their own abilities or accomplishments (though they won’t show it, they might even overcompensate). They often feel like an imposter, “putting on a show” so that others think more highly of them. In reverse, the Page might have ‘creator angst,’ feeling isolated and alone, like no one understands them. They have so many great ideas but don’t know how to get them off the ground. The Page in reverse can be moody and stuck inward, nursing their wounds for longer than might seem necessary. In this position, they might have a tendency to put others down in order to make themselves feel superior.

The Knight of Wands is charismatic, inspired and passionate, all of the strengths of threes and sevens. They are impulsive and have big ideas. Like the Page, they are creative, but the Knight is more focused on advancement and high status. They are going places and boy are they loving the admiration on the way to the top! The Knight of Wands lives on the edge. They are excited by new things and believe that the future is bright. The Knight wants to find the next big adventure and see things they have never seen before. They are all about freedom, happiness, versatility and satisfaction.

In reverse, the Knight can represent the darker side of threes and sevens. The Knight of wands fears being worthless and confronting their own pain. In reverse the Knight is unfocused and unsure where to put their energy, though it will undoubtedly end up in some new project or experience that helps them avoid the pain. In this state the Knight is struggling to be their authentic self. They might be creating an image of success in order to avoid facing their inner shame. They are probably chasing the next high, looking for the next exciting thing to try because this keeps their mind occupied. This is a way of externalizing and avoiding their fear of pain and emotions.

The Queen of wands is also ambitious, but she is better at balancing her energy. She has all of the strengths of threes and nines. She is bold, creative, and social, often the “hostess with the mostess.” The Queen, as a leader, runs a well oiled machine and makes sure all of the parts are well cared for. Her image is important, but she also prioritizes keeping others content and well managed. The Queen is a peacekeeper. She prefers to be the leader of the group in order to make sure everyone gets along (and the perk is that she gets the credit). She is achievement oriented, adaptable, energetic, diplomatic and considerate.

In reverse the Queen of Wands represents the darker side of threes and nines. Her biggest fears are being worthless and being a burden to others. If she is in reverse she might be treating relationships as a performance without actually involving herself emotionally. Going through the motions to maintain her image comes naturally to her, and can become a hindrance if she isn’t careful. The Queen in reverse can be cold, passive aggressive and can struggle to express herself appropriately, if at all. She might be so concerned with avoiding conflict that she ‘shapeshifts’ into an image that she believes meets other’s needs without considering her own. This often involves numbing herself to her own emotions, particularly her anger. The numbing could be internal, or it could also involve physical numbing with a vice such as alcohol, food, or work. She has compartmentalized all of the best parts of herself in order to avoid her own pain and anger.

The King of wands is a visionary. He has all of the positive aspects of threes and eights. He knows how to take an idea and enlist others to help him bring it to fruition. The King is charismatic, determined, and a strong communicator. Like all of the wands before him, the King of Wands is creative and focused on advancement, but he has already reached a position of power and enjoys the admiration and accolades he receives for it. He is adaptable, strong, bold, decisive, and direct. The King of Wands is not afraid to take action and lay down the law when he feels it is necessary. He is great at pushing through obstacles and achieving difficult goals.

In reverse, the King of Wands shows the shadow side of threes and eights. He can have unreasonably high expectations of himself and others. In this position, he might be struggling to communicate effectively. He can become too bold, too direct, and too driven in order to avoid failure. The King of Wands’ biggest fears are being worthless and being vulnerable. Because of this, he will often build up walls in order to protect himself. These can make him seem gruff, mean, unapproachable, and filled with ill intent. The King’s image of being strong and capable is his main defense against feeling vulnerable and worthless, so he will defend it at all costs. The reverse King is learning that it is difficult to demonstrate his creative genius when he has lost the ability to communicate and lead with compassion and vulnerability.

Historically court cards have been used to represent real people in tarot readings. These explorations of meaning do not fit that archaic use of the cards and are only meant as a reflection of the querent’s question and inner self, not necessarily another person who is uninvolved in the reading. If you are interested in exploring the Enneagram further, I highly recommend looking into the Enneagram Institute.