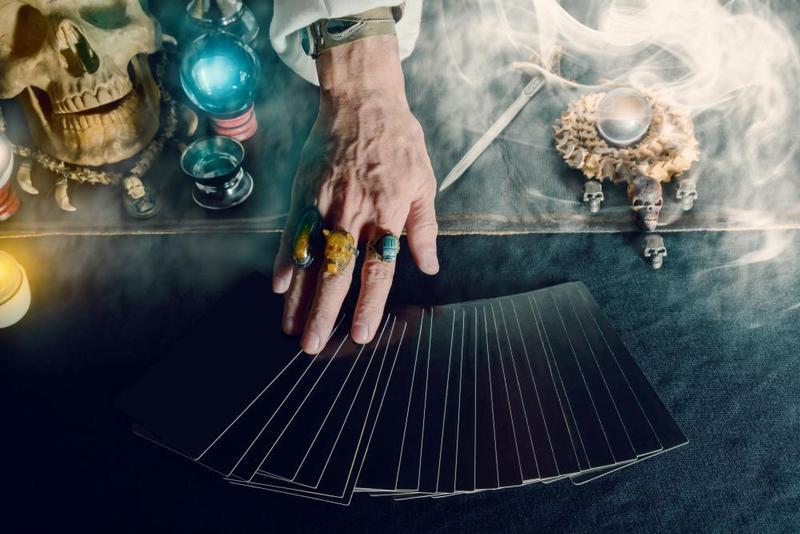 Have you ever heard the old saying “it’s all in the cards”? This idiom has its roots in cartomancy—the ancient art of fortune-telling through playing cards.

Far before cards were used to play poker or Egyptian Rat Screw, they were used for tarot readings.

When read properly, playing cards are an incredibly powerful tool that can help us make important decisions and look into the future.

When you think about the odds of a certain card, or spread, presenting itself during a reading, it feels peculiar to pass it off as mere chance. In fact, those learned in the art of divination will tell you that the order of playing cards in a reading isn’t a coincidence—it’s a psychic message from the beyond.

Playing cards possess a certain cosmic and spiritual power, due to their connection to astrology. Those able to harness this power through proper readings hold the key to many of life’s question right in the palms of their hands.

If you’re interested in learning more about fortune telling with a playing card deck, what the cards mean, and how to use them, read on for a brief overview of the ancient art of cartomancy.

What the 4 Suits Mean

As you probably already know, playing cards are divided into for suits—hearts, clubs, spades, and diamonds.

However, few people are aware that each suit is connected to an element. The elements associated with each suit are as follows:

Clubs—Fire : This suit represent strong emotions like passion, love, and conflict. It also often deals with fortune and money. Just like fire itself, they can be warm and comforting, but when uncontained they can catch ablaze and become destructive.

Spades—Air: A sign of the “winds of change.” These divination cards often present themselves during crossroads in our lives. Unfortunately, they often warn us about negative forces looming in our future.

Diamonds—Earth: This suit tends to deal with material things, like possession and money. However, they can also give us insight into careers or suggest a physical move/change.

If you are familiar with zodiac signs, you know that each element holds a special cosmic meaning and attracts different energies.

Understanding the significance of each suit can help you see the relationship between different cards in a deck. While there are other things that affect the meaning of a card—like its value and position—analyzing the suit is the first step in successful readings.

Now that you understand the meaning of each suit, we can turn our attention to the individual meanings of each card.

If you’re looking for a simple and quick answer to a question in your life, drawing a single card out of a deck may be able to provide some unique insight.

Below we have outlined the meaning behind the 52 cards found in a traditional deck.

Ace of Hearts: One of the most powerful and desirable cards, this one represents love and happiness ahead.

King of Hearts: This draw suggests that a man with a water zodiac sign predominant in his chart may be in your future. This type of person is usually of a good nature and may offer affection, helpful advice, and kindness. He will likely be quiet and wise, using his actions to help you during times of need.

Queen of Hearts: A sign that a woman with a water zodiac sign predominant in her chart may be in your future. She will be of good nature and offer affection, kindness, and helpful advice. This woman will be very nurturing and is sometimes a mother or mother-like figure.

Jack of Hearts: The Jack of Hearts can predict the presence of a young person, admirer, or friend with a water zodiac sign predominant in their chart.

10 of Hearts: The 10 of Hearts embodies the luck of the draw—predicting good fortune and success in the future.

9 of Hearts: Affectionately referred to as the “card of wishes.” The 9 of Hearts can predict the fulfillment of a wish or dream.

8 of Hearts: An unexpected gift, visit, or invitation may be in your future.

7 of Hearts: The card of “lovesickness”, the 7 of hearts is a fickle card that can indicate that someone in your life is untrustworthy or that their affections are faltering. This card is a warning sign against heartbreak or betrayal.

6 of Hearts: Suggests a wave of luck or new love interest in your future.

5 of Hearts: The 5 of hearts is associated with jealousy. Someone in your life may have ill wishes or resentment for you.

4 of Hearts: Some sort of physical movement is in your future, whether it’s travel, moving homes, or changing jobs.

3 of Hearts: The 3 of hearts is a tricky card. When it is present in an overall favorable spread, it can indicate love and happiness. However, when the spread is mostly negative, this card can mean the exact opposite—signifying some sort of emotional conflict or indecision in your relationship.

2 of Hearts: Predicts emotional support, strength, and stability from your partner. It is a highly desirable card.

Ace of Clubs: The Ace of Clubs symbolizes wealth and prosperity. This wealth can be fleeting, however, if the card presents itself in an unfavorable spread.

King of Clubs: A man with a kind heart and a fire zodiac sign predominant in his chart may be in your future.

Queen of Clubs: A confident woman with a fire zodiac sign predominant in her chart may be in your future. She will likely offer helpful advice.

Jack of Clubs: A good-hearted, playful, and fiery youth is in your future. They may be a young admirer.

10 of Clubs: The 10 of Clubs indicates financial and business success. It can predict good fortune with finances and travel. Taking a trip now could result in earning a new friend or romantic partner.

9 of Clubs: Foreshadows an achievement, usually related to money or marriage.

8 of Clubs: A warning that business/work problems could be in your future. They may be related to jealousy/envy.

7 of Clubs: This card could have two meanings. On one hand, it can suggest business success, such as a promotion. However, it can also symbolize problems with love.

6 of Clubs: This is a lucky card, predicting financial fortune and success.

5 of Clubs: A new friend or ally may be in your future.

4 of Clubs: A warning that dishonesty and betrayal may be lurking in your future. If you draw this card, be wary of others as they could be deceitful.

3 of Clubs: The 3 of Clubs is a highly favorable draw; it can suggest happiness and love, especially in marriage, as well as a second chance (especially in business/finances).

2 of Clubs: obstacles to your success may be lurking in your future. Particularly caused by gossip.

Ace of Spades: An undesirable draw, the ace of spades represents misfortune, an unwanted ending and even death.

King of Spades: An ambitious man with an air zodiac sign predominant in his chart may be in your future. This man may be self-serving.

Queen of Spades: A divorced or widowed woman with an air zodiac sign predominant in her chart may be in your future.

Jack of Spades: A jealous or hostile youth may be in your future.

10 of Spades: The 10 of Spades is an anxious card, symbolizing something bad looming in your future. This card also predicts future worry and anxiety.

9 of Spades: Another undesirable card, the 9 of spades could represent an accident, illness, or other misfortune in your future. It also predicts a personal low looming in your future.

8 of Spades: A tricky card, the 8 of spades represents temptation, danger, and possible heartbreak.

7 of Spades: Obstacles to success may be lurking in your future. You may receive some bad advice or experience a loss.

6 of Spades: Small improvements and changes may be in your future.

5 of Spades: You may run into a blessing in disguise. An obstacle looms in your future, possibly a negative person or influence.

4 of Spades: You may experience small difficulties, such as financial problems and other worries.

3 of Spades: Heartbreak may be in your future. A third person may be breaking into your relationship, causing problems.

2 of Spades: Represents heartbreak and deceit. Infidelity or separation may be looming in your future. Take this card as a warning sign to guard your heart.

Ace of Diamonds: a positive change, possibly financial, is in your future.

King of Diamonds: An older man with an Earth zodiac sign predominant in his chart is in your future. He may be characterized by status and a sense of authority or influence.

Queen of Diamonds: A woman with an Earth zodiac sign predominant in her chart may be in your future. This woman may be a gossip.

10 of Diamonds: A positive financial change.

9 of Diamonds: A new business opportunity is in your future.

8 of Diamonds: A new job may be in your future. You could also fall in love during a trip.

7 of Diamonds: An argument, likely involving money or work, is in your future, but it will probably be resolved happily.

6 of Diamonds: Relationship problems and separation may be looming.

5 of Diamonds: A positive change will bring happiness and success in your life. This might involve the birth of a child or the start of a new project.

4 of Diamonds: You could receive good advice or financial luck.

3 of Diamonds: You might receive a legal document. Be careful in your interactions with others to avoid conflict.

2 of Diamonds: A business opportunity or change is in your future. This could be affected by gossip.

The Cartomancy Spreads and How to Use Them

While drawing a single card can help predict some things in the future, laying out an entire spread reveal a larger picture. The general idea behind spreads is to shuffle the deck and think of a question as you draw individual cards. Lay the cards out on a table and analyze how their meanings relate to the subject’s life.

Below we have outlined some of the most popular spreads.

Draw a single card for a quick answer to a question

Draw 3 cards: one for the past, present, and future.

Draw 3 cards for each category: yourself, your family, friends, expectations, unexpected occurrences, and their outcomes.

Create unique categories for your own questions.

Now that you know the basics of divination with playing cards and spreads, you can start reading your own fortune or predicting the fortunes of your loved ones.