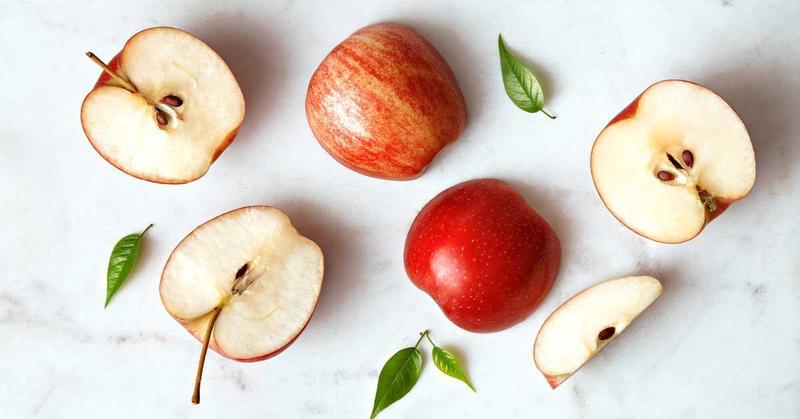 Calories provide the energy that your body needs to function and stay alive. While there is no evidence to support that negative-calorie foods burn more calories than they provide, foods that are already low in calories may actually provide fewer calories than expected. This is because your body uses energy to digest them. If you’re trying to decrease your total calorie intake, eating more low-calorie foods, such as certain fruits and vegetables, is an easy way to achieve that goal. Here are 38 foods with almost zero calories.

1. Apples Share on Pinterest Apples are highly nutritious and one of the most popular fruits in the United States, according to USDA's Economic Research Service (1). One cup (125 grams) of apple slices has 57 calories and almost three grams of dietary fiber (2). Since your body has to burn energy to digest apples, the net amount of calories provided by this fruit is probably fewer than reported.

2. Arugula Arugula is a dark, leafy green with a peppery flavor. It’s commonly used in salads, is rich in vitamin K and also contains folate, calcium and potassium. One-half cup (10 grams) of arugula has only three calories (3).

3. Asparagus Asparagus is a flowering vegetable that comes in green, white and purple varieties. All types of asparagus are healthy, but purple asparagus has compounds called anthocyanins that may help prevent heart disease ( 4 ). One cup (134 grams) of asparagus has only 27 calories and is rich in vitamin K and folate, providing 70% and 17% of the DVs, respectively (5).

4. Beets Beets are root vegetables that typically have a deep-red or purple color. One of the most researched benefits of beets is their potential to lower blood pressure ( 6 ). Beets contain only 59 calories per cup (136 grams) and 13% of the DV for potassium (7).

5. Broccoli Broccoli is one of the most nutritious vegetables on the planet. It’s a member of the cruciferous family of vegetables and may help fight cancer ( 8 ). One cup (91 grams) of broccoli has only 31 calories and over 100% of the amount of vitamin C that most people need per day (9).

6. Broth There are many varieties of broth, including chicken, beef and vegetable. It can be eaten alone or used as a base for soups and stews. Depending on the type of broth, one cup — or about 240 ml — usually contains 7–12 calories (10, 11, 12).

7. Brussels Sprouts Brussels sprouts are highly nutritious vegetables. They resemble mini cabbages and can be eaten raw or cooked. Research shows that eating Brussels sprouts may protect against DNA damage due to their high vitamin C content ( 13 ). These nutritional powerhouses only have 38 calories per cup (88 grams) (14).

8. Cabbage Cabbage is a vegetable with green or purple leaves. It’s a common ingredient in slaws and salads. Fermented cabbage is known as sauerkraut. It’s very low in calories and contains only 22 calories per cup (89 grams) (15).

9. Carrots Carrots are very popular vegetables. They’re usually thin and orange, but can also be red, yellow, purple or white. Most people associate good eyesight with eating carrots since they’re rich in beta-carotene, which can be converted to vitamin A. Getting enough vitamin A is necessary for proper vision. A one-cup serving (128 grams) of carrots has only 53 calories and over 400% of the DV for vitamin A (16).

10. Cauliflower Cauliflower is typically seen as a white head inside green leaves. Less common varieties have purple, orange and yellow heads. In recent years, cauliflower has become very popular as a substitute for higher-carb vegetables or grains. One cup (100 grams) of cauliflower has 25 calories and only five grams of carbs (17).

11. Celery Celery is one of the most well-known, low-calorie foods. Its long, green stalks contain insoluble fiber that may go undigested through your body, thus contributing no calories. Celery also has a high water content, making it naturally low in calories. There are only 18 calories in one cup (110 grams) of chopped celery (18).

12. Chard Chard is a leafy green that comes in several varieties. It’s extremely high in vitamin K, a nutrient that helps with proper blood clotting. One cup (36 grams) of chard has only 7 calories and contains 374% of the DV for vitamin K (19).

13. Clementines Clementines resemble mini oranges. They’re a common snack in the United States and are known for their high vitamin C content. One fruit (74 grams) packs 60% of the DV for vitamin C and only 35 calories (20).

14. Cucumbers Cucumbers are a refreshing vegetable commonly found in salads. They’re also used to flavor water along with fruits and herbs. Since cucumbers are mostly water, they’re very low in calories — one-half cup (52 grams) only has 8 (21).

15. Fennel Fennel is a bulbous vegetable with a faint licorice taste. Dried fennel seeds are used to add an anise flavor to dishes. Fennel can be enjoyed raw, roasted or braised. There are 27 calories in one cup (87 grams) of raw fennel (22).

16. Garlic Garlic has a strong smell and taste and is used widely in cooking to add flavor to dishes. Garlic has been used for centuries as a remedy for various illnesses. Research suggests that it may decrease blood pressure and fight infections or even cancer (23). One clove (3 grams) of garlic has only 5 calories (24).

17. Grapefruit Grapefruits are one of the most delicious and nutritious citrus fruits. They can be enjoyed on their own or on top of yogurt, salad or even fish. Certain compounds in grapefruit may decrease cholesterol levels and increase metabolism (25). There are 52 calories in half a grapefruit (123 grams) (26).

18. Iceberg Lettuce Iceberg lettuce is known for its high water content. It’s commonly used in salads and on top of burgers or sandwiches. Even though most people think it’s not as nutritious as other lettuces, iceberg lettuce is rich in vitamin K, vitamin A and folate. One cup (72 grams) of iceberg lettuce has only 10 calories (27).

19. Jicama Jicama is a tuber vegetable that resembles a white potato. This vegetable is typically eaten raw and has a texture similar to a crisp apple. One cup (120 grams) of jicama has over 40% of the DV for vitamin C and only 46 calories (28).

20. Kale Kale is a leafy green that has gained popularity in recent years for its impressive nutritional benefits. You can find kale in salads, smoothies and vegetable dishes. Kale is one of the richest sources of vitamin K in the world. One cup (67 grams) has close to seven times the amount of vitamin K that the average person needs per day and only 34 calories (29).

21. Lemons and Limes The juice and zest of lemons and limes are widely used to flavor water, salad dressings, marinades and alcoholic drinks. Citrus does more than just add flavor. Research shows that lemon juice has compounds that can act as antioxidants to fight and prevent diseases in your body (30). One fluid ounce (30 grams) of lemon or lime juice has only 8 calories (31, 32).

22. White Mushrooms Mushrooms are a type of fungus with a sponge-like texture. Vegetarians and vegans sometimes use them as a substitute for meat. Mushrooms contain several important nutrients and have only 15 calories per cup (70 grams) (34).

23. Onions Onions are a very popular vegetable. Varieties of onions include red, white and yellow, as well as spring onions or scallions. Even though the taste differs depending on the type, all onions have very few calories — one medium onion (110 grams) has approximately 44 (35).

24. Peppers Peppers come in many colors, shapes and sizes. Popular types include bell peppers and jalapeños. Research shows that bells peppers are particularly high in antioxidants and may protect the body from the damaging effects of oxidation (36). There are only 46 calories in one cup (149 grams) of chopped, red bell peppers (37).

25. Papaya Papaya is an orange fruit with black seeds that resembles a melon and is typically grown in tropical regions. It’s very high in vitamin A and a good source of potassium. One cup (140 grams) of papaya has only 55 calories (38).

26. Radishes Radishes are crunchy root vegetables with a somewhat spicy bite. They’re typically seen in grocery stores as dark-pink or red but can be grown in a variety of colors. Radishes have several beneficial nutrients and only 19 calories per cup (116 grams) (39).

27. Romaine Lettuce Romaine lettuce is a very popular leafy vegetable used in salads and on sandwiches. The calorie content of romaine is very low since it’s high in water and rich in fiber. One leaf (6 grams) of romaine lettuce has just a single calorie (40).

28. Rutabaga Rutabaga is a root vegetable also known as swede. It tastes similar to turnips and is a popular substitute for potatoes in recipes to decrease the number of carbs. One cup (140 grams) of rutabaga has 50 calories and only 11 grams of carbohydrates (41).

29. Strawberries Strawberries are an extremely popular fruit. They’re very versatile and appear in breakfast dishes, baked goods and salads. Studies show that eating berries may help protect you from chronic diseases, such as cancer and heart disease ( 42 ). There are less than 50 calories in one cup (152 grams) of strawberries (43).

30. Spinach Spinach is another leafy green that is loaded with vitamins and minerals and very low in calories. It’s high in vitamin K, vitamin A and folate and has more protein than some other leafy vegetables. A one-cup (30 grams) serving of spinach has only 7 calories (44).

31. Sugar Snap Peas Sugar snap peas are a delicious variety of peas. Their pods are entirely edible and have a sweet flavor. They’re typically eaten raw on their own or with a dip, yet can also be added to vegetable dishes and salads. Snap peas are highly nutritious and contain almost 100% of the DV for vitamin C for only 41 calories in one cup (98 grams) (45).

32. Tomatoes Tomatoes are one of the most popular vegetables in the world. They can be served raw, cooked or pureed in a tomato sauce. They’re also highly nutritious and contain a beneficial compound called lycopene. Research has shown that lycopene may protect against cancer, inflammation and heart disease ( 46 ). One cup (149 grams) of cherry tomatoes has 27 calories (47).

35. Watermelon As its name suggests, watermelon is a very hydrating fruit. It tastes delicious on its own or paired with fresh mint and feta. Watermelon contains some of almost every nutrient and a high amount of vitamin C. There are 46 calories in one cup (152 grams) of diced watermelon (50).

36. Zucchini Zucchini is a green type of summer squash. It has a delicate taste that makes it a versatile addition to recipes. In recent years, spiralizing zucchini into “zoodles” as a substitute for higher carb noodles has become very popular. Zucchini is also quite low in calories, with only 18 per cup (124 grams) (51).

37. Beverages: Coffee, Herbal Tea, Water, Carbonated Water Some beverages are very low in calories, especially when you don’t add anything to them. Plain water contains no calories. Most herbal teas and carbonated waters have zero to very few calories, while black coffee has only 2 calories per cup (237 grams) (52). Choosing these drinks over beverages with added sugar, cream or juice can help you reduce your calorie intake.

38. Herbs and Spices Herbs and spices are used to add flavor to foods and are extremely low in calories. Common herbs that are eaten fresh or dried include parsley, basil, mint, oregano and cilantro. Some well-known spices are cinnamon, paprika, cumin and curry. Most herbs and spices have fewer than five calories per teaspoon (53).