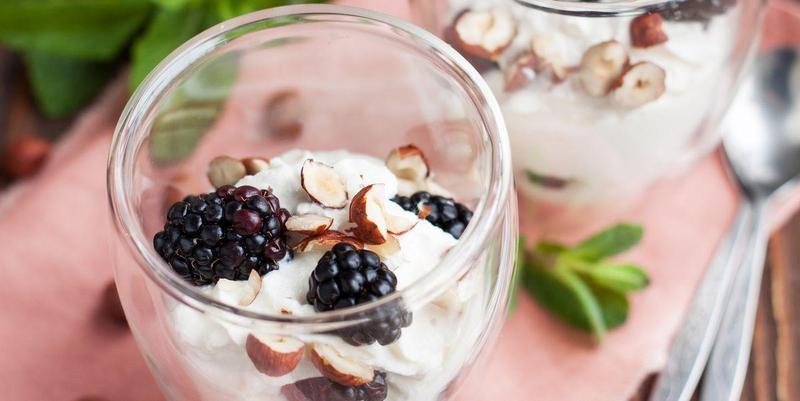 No single food in isolation of everything else you eat is going to make you gain (or lose!) weight. But often, the same barrier stumps so many people when it comes to weight loss and healthier eating: sneaky sources of added sugar or saturated fat lurking throughout the pantry, fridge, or freezer.

Many times these foods are marketed as healthier options, leading you to buy them for their purported benefits — but actually, you might’ve been much more satisfied if you’d chosen the real thing instead. Other times, they’re foods that have replaced the calories coming from one type of nutrient with another. For example, keto snacks swap sugar for high-fat coconut oil or butter; low-fat foods swap fat for added sugar. Read labels carefully — especially anything with a "free," "low," or "less" claim — to make sure you’re making a choice that works best for you.

My best tip: Prioritize real, wholesome foods in their closest-to-intended state as often as possible. (The only ingredient in your peanut butter should be peanuts!) The fewer the ingredients, generally the better it is for you. This helps you get super picky about what you’re really in the mood to eat, while helping you determine what choices will maximize your enjoyment and minimize self-sabotage.

Cereals are deceptive for two reasons: First, many are secret sugar bombs, especially if you aren't sticking to the suggested serving size. Second, because sugary cereals are sometimes low in fiber, they can leave you ravenous when lunch is hours away.

Coconut oil was never the elixir it was touted to be at 117 calories, 14 grams total fat, and 12 grams saturated fat (60% of the daily value) per one tablespoon. The bottom line is that having a tablespoon a day is unlikely to harm anyone, but there's no data to support coconut oil as a cure-all.

Your body processes sweeteners like agave nectar, honey, maple syrup, evaporated cane juice, and corn syrup pretty much the same way as it does plain, old white or brown sugar — so you should watch how much you eat or drink no matter which type is used. Like regular sugar, agave syrup contains about 45–60 calories per tablespoon.

Fruit smoothies and juices are often just extra-sugary versions of a previously good-for-you foods. Look for blended bevs under 12 grams of sugar a pop to ensure that your snack contains more protein than sweet stuff. It'll help you stay satisfied and keep cravings at bay.

Eliminate lunchbox meals with processed meat and cheese from your grocery list ASAP. They're filled with sodium and saturated fat, and provide little to no fiber. In fact, many versions of these processed snack products can set you back 600 milligrams of sodium — that's about 30% of your recommended daily amount!

If you're among the 1% of Americans suffering from celiac disease (or a diagnosed gluten intolerance), gluten-free alternatives can serve as amazing substitutes! However, there's nothing necessarily healthier about gluten-free pasta compared to regular pasta. In fact, it's likely lower in protein and fiber than its whole-wheat alternative. The same goes for breads, cookies, and other gluten-free products. The calorie counts usually remain the same, but you may eat more of the gluten-free one because it appears "healthier." So unless you're suffering from celiac disease, you're not doing yourself any favors opting for a gluten-free version.

Margarita and bloody mary mixes are top offenders, but even healthy-sounding options can be total sugar bombs, setting you back up to 60 grams per 12-ounce cocktail. Stick to a clear spirit on the rocks or a glass of wine so you can save the sweets for where they belong (at dessert).

Protein shakes do have a place in a life (like if you're having trouble chewing), but most of us add them to our day instead of swapping them in. Most hover between 250-600 calories per 16-ounce serving, making them a hearty snack for some and a mini-meal for others. Check labels on any protein powder to make sure you’re choosing ones with minimal added sugar. And if you’re drinking them as post-workout fuel, you may be better off with a piece of fruit and cheese to tide you over until meal time.

Some are better than others, but my biggest gripe with breakfast bars is their promise of being “satisfying.” With too little protein, fiber, and fat, many simply won't fill you up. Look for ones that provide at least 4 grams each of protein and fiber, and less than 6 grams of added sugar per serving. The first ingredient should be an actual food (e.g., almonds, dates, apples) and skip ones that contain a protein-isolate. Plan on adding nuts, nut butter, hard-boiled-eggs, or unsweetened low-fat latte to your breakfast as well.

Tomato sauce can be a healthy, low-calorie cooking addition, but it's another one where label reading is key," says London. Many tomato sauce brands contain added sugar and tons of sodium—which basically adds up to unnecessary calories and bloating.

Carob is often touted as a healthier alternative to chocolate, but in reality, it contains the same number of calories (150 per 1-ounce serving) and it lacks the health benefits linked to modest chocolate intake (including lowering your risk of obesity and heart disease). The only difference is that carob is caffeine-free, which can be beneficial if you're sensitive to the stimulant. But if you're trying to lose weight, you'll want to limit your intake of both carob and chocolate.

This is another example where you might assume the alternative version has fewer calories than the original — but it doesn’t. Vegan cheese still has about 100 calories per ounce, just like the regular kind, and it's loaded with fake ingredients such as starch, xanthan gum, and protein isolates. Additionally, you're losing the protein-rich benefit of the real deal: String cheese has 1 grams of protein, whereas a serving of vegan cheese contains about 1 gram — so you won’t even feel as full from each serving.

Not only does a sweetened tea latte contain almost triple the sugar found in a regular coffee latte, but a 16-ounce chai has up to double the amount in an entire bag of Peanut M&M's! My advice for a go-to order? Have a small cappuccino with whole milk or low-fat milk. Then flavor with cinnamon, nutmeg, powdered cocoa, or vanilla powder without worrying about added sweetener.

Both keto and paleo snacks often come loaded with saturated fat, and while they may contain less sugar than other alternatives, they're also much lower in fiber than nutritious, 100% whole-grain (or veggie, legume, or fruit-based) options.

If you're on the run, grab the plate from the cold case instead. The cheese will fill you up with protein and some fat, while the fruit offers a little bonus fiber. Steer clear of those parfaits, though. They're usually veritable sugar bombs from pre-sweetened yogurt, with an average cup containing a whopping 60 grams of sugar. That's more than the recommended amount for an entire day!

Plant-based protein that's used to create something new — and therefore highly processed — is susceptible to being loaded with sodium and saturated fat. For example, the Impossible Burger contains about about 16% of your recommended daily value for sodium, compared to just 4% in plain beef — plus 2 more grams of saturated fat from the added coconut oil despite a similar number of calories.

Sodium-filled foods can lead to increased thirst — a symptom we often confuse with hunger. Plus, salty snacks can be pretty protein- and fiber-less, which can quickly add calories without adding much by way of nutritional value. Drink 16 ounces of H2O before you start snacking and choose 100% whole-grain versions where possible to help you truly determine the difference between hunger and thirst.

Products with CBD often contain ingredients that'll make anything taste better, like added sugar, sodium, and saturated fat-filled oils. Also, there currently aren't any dosage guidelines or guarantees that a product even contains as much CBD as it says it does. Another factor to consider: Your body can use only a fraction (less than 20%) of the CBD it digests.

Salad With Dressing on the Side

Listen up, folks: no more ordering dressing on the side, asking for burgers without the bun, or missing out on experiences because you’re saving calories. When we restrict items like these, we often wind up overdoing it later on in our day. Eating real food and sharing meals should be joyful, fulfilling, and enriching, so know that it’s okay to go for it if that’s what you’re really in the mood for.