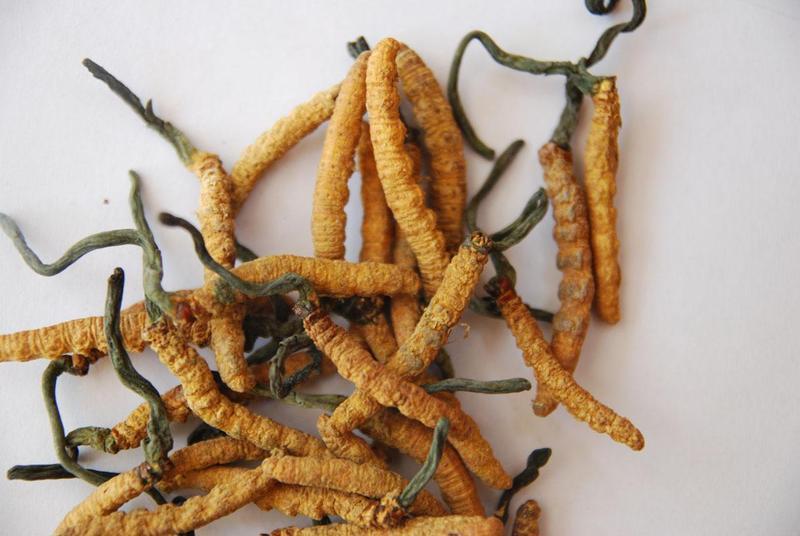 burst into the media spotlight in 1993 when a team of Chinese women’s track and field runners broke nine world records at the Chinese National Games in Beijing. Initially, the Chinese team was suspected of using steroids.

After testing negatively for anabolic steroid use, the team’s coach revealed that the success of the Chinese athletes was not drug related but was instead the result of a daily elixir, which significantly boosts the body’s energy, endurance, stamina and overall vitality. This highly publicized episode launched the widespread use of Cordyceps by the World’s top athletes.

“ is considered in Asia to be a powerful athlete’s tonic. It has no steroidal constituents, but greatly improves performance and muscle building capability.”

It is greatly treasured and has been used for thousands of years in China. Chinese herbalists classify it as an adaptogenic superior tonic herb. Cordyceps is legendary for its immune modulating and energy enhancing abilities.

It’s also a potent anti-inflammatory. to successfully treat a wide variety of health problems and only a small select group of herbs are considered (superior) tonic herbs in Chinese Medicine’s Materia Medica.

According to Ron Teeguarden, founder of Dragon Herbs, author, researcher practitioner of Asian health care since 1971 and a practicing herbalist since 1974:

For an herb to be recognized as a superior (tonic) herb, that herb must have been found over many centuries of human use to meet six specific qualifications:

A key point to keep in mind is that excels at oxygenation. The fungus dilates the airways in the lungs, resulting in increased oxygenation of the blood. Thus more oxygen reaches the cells helping to increase the mitochondria’s energy output.

“In addition, both C. sinensis and C. militaris contain unique medicinal components such as specific nucleosides called cordycepin and adenosine. These active ingredients have been proven to play a key role in increasing ATP production and are additionally useful to the cardiovascular system, helping to regulate blood pressure. ATP, or adenosine triphosphate, is the intracellular energy source for your muscles.”

What Exactly is Cordyceps?

The wild version of sinensis is only found in the Tibetan Plateau region, which includes parts of Tibet, China, India, Nepal and Butan. Cordyceps sinensis is one species in a genus of hundreds. Other species can be found all over the world.

The Latin name for cordyceps means “club head”, and the term sinensis means “from China”. In Tibetan it’s called yartsa gunbu, the English refer to it as “caterpillar fungus” and its commonly known in China, as “dong chong zia cao” (winter worm, summer grass or caterpillar fungus).

Although is known as a medicinal mushroom; technically it’s an ascocarp, or a specific type of fungus. Cordyceps sinensis is the bizarre product of a parasitic fungus. First the fungus invades the larvae of a moth (a caterpillar) destroying it from within. The fungus develops inside the insect larvae, killing the caterpillar in the process before bursting out of the corpse as an orange or brown fruiting body 4 inches (around 10 cm) long and about .2 inches (1/2 cm) wide. Unlike a typical mushroom, these fungi are curved and resemble a club that has been shaped into a small cane.

Traditionally the remains of the dead caterpillar larvae along with the invading fungus is harvested at the precise time, then carefully dried and bundled and sold in markets as Cordyceps.

In fact, is one of the most expensive mushrooms in the world. Historically only the emperor and the upper classes of China could afford it. In fact unauthorized procurement of this prized mushroom was punishable by death unless of course it was destined for the emperor and his family.

Currently a pound of wild, high quality Cordyceps can cost up to $1,000 or more in Hong Kong. By the 1980’s the overharvesting of wild Cordyceps along with increased medical demand in China necessitated innovative methods for growing and cultivating a domesticated version of Cordyceps.

“Cordyceps militaris cultivated on bred larvae shown at the IMMC5 exhibition. In early 2010 in the UK a research article was published demonstrating how Cordycepin, one of the active ingredients in Cordyceps militaris , is succeeding in stopping cancer cell reproduction.”

Most high quality cultivated cordyceps are derived from wild spores either from the sinensis or militaris species. Cultivated versions of Cordyceps are very concentrated, exhibiting the same health enhancing qualities as wild varieties.

“In the last several years, it has become possible to grow a number of fungi by “fermentation” technology. The fungus is literally grown in large tanks, and in just a matter of days a large quantity can be produced. (…) Cordyceps is almost identical to that of the wild variety and pharmacological and clinical studies seems to farther confirm this. The Cordyceps contained in most commercial products is produced by this technology.”

In fact, numerous tests have demonstrated that the cultivated form of cordyceps is equally as potent as the wild version and in some cases more potent than the wild caterpillar-body form.

“Traditional Chinese Medicine (TCM) uses Cordyceps to strengthen and regulate the Kidney and Lung meridians. “Cordyceps is used to strengthen the body and mind at a fundamental level. It is said to be able to increase the “primary motive force for life activities.” — Ron Teeguarden

Cordyceps is considered a major lung tonic in Chinese herbalism.

Cordyceps relaxes and opens the airways.

This explains why it has been used traditionally to treat respiratory diseases such as: pneumonia, chronic bronchitis, pulmonary emphysema, and tuberculosis.

Cordyceps is recognized in Traditional Chinese medicine (TCM) as an anti-asthmatic, an expectorant and as a cough suppressant.

Liu Ganzhong in his book discusses Cordyceps extract ability to alleviate the symptoms of various respiratory illnesses including chronic bronchitis, asthma, pneumonia, and phlegm. This is mainly due to the anti-inflammatory properties of Cordyceps and its tendency to relax the bronchial walls and promote enhanced oxygen utilisation efficacy. (Ganxhon, L et al. The essentials of traditional Chinese herbal medicine (5th edition). USA: Foreign Language Press, 2003)

“It is especially beneficial to those who suffer chronic lung disease, It’s used to combat Lung weakness with cough, wheezing and shortness of breath.”

Research reveals that Cordyceps increases lung capacity and overall oxygen utilization. What has been known in Asia for millennia has now been proven scientifically― Cordyceps improves overall respiratory function.

A clinical trial involving 50 asthma patients showed Cordyceps to be very effective at reducing asthmatic symptoms. Its effectiveness against asthma symptoms averaged an impressive 81.3% in just five days. Pharmaceutical antihistamines were only 61.1% effective after an average of nine days! And Cordyceps does not produce the serious unwanted side effects of toxic, synthetic pharmaceutical drugs.

Based on extensive clinical studies, Cordyseps effectively treats a wide range of respiratory diseases and dysfunctions including: asthma, COPD, and bronchitis or when it was combined with antibiotics it was effective and highly beneficial.

Cordyceps is considered to be one of the best immune modulating and energy enhancing adaptogens in Chinese herbalism.

Because Cordyceps is such a powerful adaptogen, it can assist the body in replenishing the deeper layers of immunity located at the level of the bone marrow reserve. It’s loaded with “immune supporting polysiaccharides, such as beta-glucans and the antitumor inhibiting CO-1, plus the compound called “cordycepin” is an immunoregulatory active ingredient of Cordyceps sinensis, which is unique to Cordyceps.

Studies indicate many of the polysaccharides and nucleosides found in Cordyceps boost the immune system and demonstrate strong antioxidant, antiviral, and anti-tumor activity.

Cordyceps supports recovery from adrenal depletion. It’s used for many conditions where lack of energy and weakness are problematic for example:

Cordyceps is commonly used as a restorative tonic for those who are convalescing from an illness or injury, or following an operation, or after giving birth. It helps the patient recover their physical strength, improves appetite, and generally protects the body from any opportunistic infections.

As a sexual tonic, Cordyceps is considered to be one of the best.

It is also used for impotence, sexual malaise, frigidity and infertility.

studies have confirmed that Cordyceps can improve liver function.

A clinical study consisting of 33 patients who were diagnosed with hepatitis B after taking a Cordyceps showed a 71.9% improvement on the thymol turbidity test and 78.6% improvement in the SGPT test – both are enzyme tests measuring liver function.

Cordyceps has been shown to improve glucose metabolism and boosts insulin sensitivity in normal rats.

Cordyceps has been shown to improve glucose metabolism and boosts insulin sensitivity in normal rats.

Research indicates that Cordyceps can help the body ward off pathogenic bacteria, fungi, and viruses. In Asia Cordyceps is used to treat fungal infections. Currently research is underway at dozens of institutions in China and Japan to determine Cordyceps’ ability to treat different types of cancer.

The evidence strongly suggests that the main active constituent in Cordyceps “cordycepin” an immunoregulatory active ingredient of Cordyceps sinensis, has the ability to inhibit DNA synthesis in cancerous cells thus inhibiting tumor growth while expediting the death of tumor cells, known as apoptosis.

How to Use It

Traditionally Cordyceps is taken as a tonic twice a day (from 2- 7 grams) as a broth, a tea or an extract.