The Origin of Freemasonry: The Crusaders And Templars 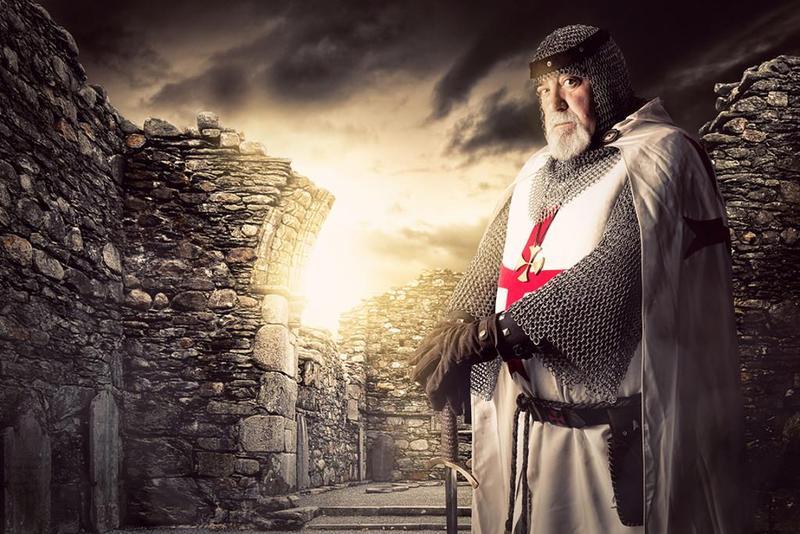 The common perception of the majority of historians of Freemasonry is that the origin of the organization goes back to the Crusades. In fact, though Masonry was only officially established and recognized in England in the early eighteenth century, the roots of the organization do reach back to the Crusades in the twelfth century. At the center of this familiar tale is an order of crusaders called the Knights Templar or the Templars.

No matter how much some may insist that the Crusades were military expeditions carried out in the name of the Christian faith, fundamentally, they were undertaken for material gain. In a period when Europe was experiencing great poverty and misery, the prosperity and wealth of the East, especially of the Muslim in the Middle East, attracted the Europeans. This inclination took on a religious facade, and was ornamented with the symbols of Christianity, though, in actuality, the idea of the Crusades was born out of a desire for worldly gain. This was the reason for the sudden change among Christians of Europe from their former pacifist policies, in earlier periods of their history, towards military aggression.

The founder of the Crusades was Pope Urban II. He summoned the Council of Clermont, in 1095, in which the former pacifist doctrine of the Christians was abandoned. A holy war was called for, with the intent to wrest the holy lands from the hands of the Muslims. Following the council, a huge army of Crusaders was formed, composed both of professional soldiers, and tens of thousands of ordinary people.

Historians believe Urban II's venture was prompted by his desire to thwart the candidacy of a rival to the papacy. Furthermore, while European kings, princes, aristocrats and others greeted the pope's call with excitement, their intentions were basically mundane. As Donald Queller of The University of Illinois put it, "the French knights wanted more land. Italian merchants hoped to expand trade in Middle Eastern ports... Large numbers of poor people joined the expeditions simply to escape the hardships of their normal lives." Along the way, this greedy mass slaughtered many Muslims, and even Jews, in hopes of finding gold and jewels. The crusaders even cut open the stomachs of those they had killed to find gold and precious stones the victims may have swallowed before they died.

After a long and difficult journey, and much plunder and slaughter of Muslims, this motley band called Crusaders reached Jerusalem in 1099. When the city fell after a siege of nearly five weeks, the Crusaders moved in. They carried out a level of savagery the like of which the world has seldom seen. All Muslims and Jews in the city were put to the sword. In the words of one historian, "They killed all the Saracens and the Turks they found... whether male or female."

In two days, the Crusader army killed some 40,000 Muslims in the most barbaric manner.4 The crusaders then made Jerusalem their capital, and founded a Latin Kingdom stretching from the borders of Palestine to Antioch.

Later, the crusaders initiated a struggle to maintain their position in the Middle East. In order to sustain the state they had founded, it was necessary to organize it. To this end, they established military orders, the alike of which had never existed before. Members of these orders came from Europe to Palestine, and lived in a type of monastery where they received military training to fight against Muslims. One of these orders, in particular, was different from the others. It underwent a transformation that would influence the course of history. This order was the Templars.

The Templars, or, their full name, The Poor Fellow-Soldiers of Jesus Christ and the Temple of Solomon, was formed in 1118, that is, 20 years after the crusaders took Jerusalem. The founders of the order were two French knights, Hugh de Payens and Godfrey de St. Omer. At first there were 9 members, but the order steadily grew. The reason they named themselves after the temple of Solomon was because the place they had chosen as a base was the temple mount where this ruined temple had been located. This same location was where the Dome of the Rock (Qubbet as-Sakhrah) stood.

The Templars called themselves "poor soldiers," but within a short time they became very wealthy. Christian pilgrims, coming from Europe to Palestine, were under the complete control of this order, and by whose money they became very rich.

It was the Templars who were mainly responsible for the crusaders' attacks of and murder of Muslims. For this reason, the great Islamic commander Saladin, who defeated the crusaders' army in 1187, in the Battle of Hattin, and afterwards rescued Jerusalem, put the Templars to death for the murders they had committed, even though he had otherwise pardoned a large number of Christians. Although they lost Jerusalem, and suffered heavy casualties, the Templars continued to exist. And, despite the continual diminution of the Christian presence in Palestine, they increased their power in Europe and, first in France, and then in other countries, became a state within a state.

Finally, in 1307, the French king Philip le Bel decided to arrest the members of the order. Some of them managed to escape but most of them were caught. Pope Clement V also joined the purge. Following a long period of interrogation and trial, many of the Templars admitted to heretical beliefs, that they had rejected the Christian faith and insulted Jesus in their masses. Finally, the leaders of the Templars, who were called "grand masters," beginning with the most important of them, Jacques de Molay, were executed in 1314 by order of the Church and the King. The majority of them were put into prison, and the order dispersed and officially disappeared.

The trial of the Templars ended with the termination of the order. But, although the order "officially" ceased to exist, it did not actually disappear. During the sudden arrest in 1307, some Templars escaped, managing to cover their tracks. According to a thesis based on various historical documents, a significant number of them took refuge in the only kingdom in Europe that did not recognize the authority of the Catholic Church in the fourteenth century, Scotland. There, they reorganized under the protection of the Scottish King, Robert the Bruce. Some time later, they found a convenient method of disguise by which to continue their clandestine existence: they infiltrated the most important guild in the medieval British Isles—the wall builders' lodge, and eventually, they fully seized control of these lodges.

The wall-builders' lodge changed its name, at the beginning of the modern era, calling itself the "Masonic lodge." The Scottish Rite is the oldest branch of Masonry, and dates back to the beginning of the fourteenth century, to those Templars who took refuge in Scotland. And, the names given to the highest degrees in Scottish Rite are titles attributed centuries earlier to knights in the order of Templars. These are still employed to this day.

In short, the Templars did not disappear, but their philosophy, beliefs and rituals still persist under the guise of Freemasonry. This thesis is supported by much historical evidence, and is accepted today by a large number of Western historians, whether they are Freemasons or not., (For detailed information see Harun Yahya, The New Masonic Order)

The thesis that traces the roots of Masonry to the Templars is often referred to in magazines published by Masons for its own members. Freemasons are very accepting of the idea. One such magazine is called Mimar Sinan (a publication of Turkish Freemasons), which describes the relationship between the Order of the Templars and Freemasonry in these words:

In 1312, when the French king, under pressure from the Church, closed the Order of Templars and gave their possessions to the Knights of St. John in Jerusalem, the activities of the Templars did not cease. The great majority of the Templars took refuge in Freemasonic lodges that were operating in Europe at that time. The leader of the Templars, Mabeignac, with a few other members, found refuge in Scotland under the guise of a wall builder under the name of Mac Benach. The Scottish King, Robert the Bruce, welcomed them and allowed them to exercise great influence over the Masonic lodges in Scotland. As a result, Scottish lodges gained great importance from the point of view of their craft and their ideas.

Today, Freemasons use the name Mac Benach with respect. Scottish Masons, who inherited the Templars' heritage, returned it to France many years later and established there the basis of the rite known as the Scottish Rite."

Finally, we say, it is clear that the roots of Freemasonry stretch back to the Order of Templars, and that the Masons have adopted the philosophy of this order. Masons themselves accept this. (For further reading, see "Global Freemasonry" by Harun Yahya)

by Harun Yahya For Mediamonitors