The Neurology of Self-Awareness 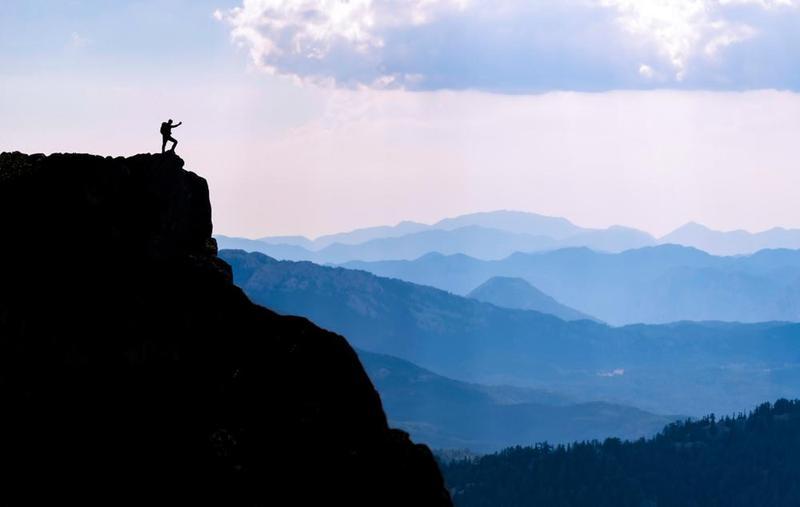 What is the self? How does the activity of neurons give rise to the sense of being a conscious human being? Even this most ancient of philosophical problems, I believe, will yield to the methods of empirical science. It now seems increasingly likely that the self is not a holistic property of the entire brain; it arises from the activity of specific sets of interlinked brain circuits. But we need to know which circuits are critically involved and what their functions might be. It is the "turning inward" aspect of the self — its recursiveness — that gives it its peculiar paradoxical quality.

It has been suggested by Horace Barlow, Nick Humphrey, David Premack and Marvin Minsky (among others) that consciousness may have evolved primarily in a social context. Minsky speaks of a second parallel mechanism that has evolved in humans to create representations of earlier representations and Humphrey has argued that our ability to introspect may have evolved specifically to construct meaningful models of other peoples minds in order to predict their behavior. "I feel jealous in order to understand what jealousy feels like in someone else" — a short cut to predicting that persons behavior. Here I develop these arguments further. If I succeed in seeing any further it is by "standing on the shoulders of these giants". Specifically, I suggest that "other awareness" may have evolved first and then counterintutively, as often happens in evolution, the same ability was exploited to model ones own mind — what one calls self awareness. I will also suggest that a specific system of neurons called mirror neurons are involved in this ability. Finally I discuss some clinical examples to illustrate these ideas and make some testable predictions. There are many aspects of self. It has a sense of unity despite the multitude of sense impressions and beliefs. In addition it has a sense of continuity in time, of being in control of its actions ("free will"), of being anchored in a body, a sense of its worth, dignity and mortality (or immortality).

Each of these aspects of self may be mediated by different centers in different parts of the brain and its only for convenience that we lump them together in a single word. As noted earlier there is one aspect of self that seems stranger than all the others — the fact that it is aware of itself. I would like to suggest that groups of neurons called mirror neurons are critically involved in this ability. The discovery of mirror neurons was made G. Rizzolati, V Gallase and I Iaccoboni while recording from the brains of monkeys performed certain goal-directed voluntary actions. For instance when the monkey reached for a peanut a certain neuron in its pre motor cortex ( in the frontal lobes) would fire. Another neuron would fire when the monkey pushed a button, a third neuron when he pulled a lever. The existence of such Command neurons that control voluntary movements has been known for decades. Amazingly, a subset of these neurons had an additional peculiar property. The neuron fired not only (say) when the monkey reached for a peanut but also when it watched another monkey reach for a peanut! These were dubbed "mirror neurons" or "monkey-see-monkey-do" neurons. This was an extraordinary observation because it implies that the neuron (or more accurately, the network which it is part of) was not only generating a highly specific command ("reach for the nut") but was capable of adopting another monkey's point of view. It was doing a sort of internal virtual reality simulation of the other monkeys action in order to figure out what he was "up to". It was, in short, a "mind-reading" neuron. Neurons in the anterior cingulate will respond to the patient being poked with a needle; they are often referred to as sensory pain neurons. Remarkably, researchers at the University of Toronto have found that some of them will fire equally strongly when the patient watches someone else is poked. I call these "empathy neurons" or "Dalai Lama neurons" for they are, dissolving the barrier between self and others. Notice that in saying this one isn't being metaphorical; the neuron in question simply doesn't know the difference between it and others.

Primates (including humans) are highly social creatures and knowing what someone is "up to" — creating an internal simulation of his/her mind — is crucial for survival, earning us the title "the Machiavellian primate". In an essay for Edge (2001) entitled "Mirror Neurons and the Great Leap Forward"I suggested that in addition to providing a neural substrate for figuring out another persons intentions (as noted by Rizzolati's group) the emergence and subsequent sophistication of mirror neurons in hominids may have played a crucial role in many quintessentially human abilities such as empathy, learning through imitation (rather than trial and error), and the rapid transmission of what we call "culture". (And the "great leap forward" — the rapid Lamarckian transmission of "accidental") one-of-a kind inventions. I turn now to the main concern of this essay — the nature of self. When you think of your own self, what comes into mind? You have sense of "introspecting" on your own thoughts and feelings and of " watching" yourself going about your business — as if you were looking at yourself from another persons vantage point. How does this happen ? Evolution often takes advantage of pre-existing structures to evolve completely novel abilities. I suggest that once the ability to engage in cross modal abstraction emerged — e.g. between visual "vertical" on the retina and photoreceptive "vertical" signaled by muscles (for grasping trees) it set the stage for the emergence of mirror neurons in hominids. Mirror neurons are also abundant in the inferior parietal lobule — a structure that underwent an accelerated expansion in the great apes and, later, in humans… As the brain evolved further the lobule split into two gyri — the supramarginal gyrus that allowed you to "reflect" on your own anticipated actions and the angular gyrus that allowed you to "reflect" on your body (on the right) and perhaps on other more social and linguistic aspects of your self (left hemisphere) I have argued elsewhere that mirror neurons are fundamentally performing a kind of abstraction across activity in visual maps and motor maps. This in turn may have paved the way for more conceptual types of abstraction; such as metaphor ("get a grip on yourself"). How does all this lead to self awareness? I suggest that self awareness is simply using mirror neurons for "looking at myself as if someone else is look at me" (the word "me" encompassing some of my brain processes, as well).

The mirror neuron mechanism — the same algorithm — that originally evolved to help you adopt another's point of view was turned inward to look at your own self. This, in essence, is the basis of things like "introspection". It may not be coincidental that we use phrases like "self conscious" when you really mean that you are conscious of others being conscious of you. Or say "I am reflecting" when you mean you are aware of yourself thinking. In other words the ability to turn inward to introspect or reflect may be a sort of metaphorical extension of the mirror neurons ability to read others minds. It is often tacitly assumed that the uniquely human ability to construct a "theory of other minds" or "TOM" (seeing the world from the others point of view; "mind reading", figuring out what someone is up to, etc.) must come after an already pre- existing sense of self. I am arguing that the exact opposite is true; the TOM evolved first in response to social needs and then later, as an unexpected bonus, came the ability to introspect on your own thoughts and intentions. I claim no great originality for these ideas; they are part of the current zeitgeist. Any novelty derives from the manner in which I shall marshall the evidence from physiology and from our own work in neurology. Note that I am not arguing that mirror neurons are sufficient for the emergence of self; only that they must have played a pivotal role. (Otherwise monkeys would have self awareness and they don't). They may have to reach a certain critical level of sophistication that allowed them to build on earlier functions (TOM) and become linked to certain other brain circuits, especially the Wernickes ("language comprehension") area and parts of the frontal lobes. Does the mirror neuron theory of self make other predictions? Given our discovery that autistic children have deficient mirror neurons and correspondingly deficient TOM, we would predict that they would have a deficient sense of self (TMM) and difficulty with introspection. The same might be true for other neurological disorders; damage to the inferior parietal lobule/TPO junction (which are known to contain mirror neurons) and parts of the frontal lobes should also lead to a deficiency of certain aspects self awareness. (Incidentally, Gallup's mirror test — removing a paint splotch from your face while looking at a mirror — is not an adequate test of self awareness, even though it is touted as such.

We have seen patients who vehemently claim that their reflection in the mirror is "someone else" yet they pass the Gallup test!) It has recently been shown that if a conscious awake human patient has his parietal lobe stimulated during neurosurgery, he will sometimes have an "out of body" experience — as if he was a detached entity watching his own body from up near the ceiling. I suggest that this arises because of a dysfunction in the mirror neuron system in the parieto-occipital junction caused by the stimulating electrode. These neurons are ordinarily activated when we temporarily "adopt" another's view of our body and mind (as outlined earlier in this essay). But we are always aware we are doing this partly because of other signals (both sensory and reafference/command signals) telling you you are not literally moving out of yourself. (There may also be frontal inhibitory mechanisms that stop you from involuntarily mimicking another person looking at you). If these mirror neuron-related mechanisms are deranged by the stimulating electrode the net result would be an out-of-body experience. Some years ago we examined a patient with a syndrome called anosognosia who had a lesion in his right parietal lobe and vehemently denied the paralysis. Remarkably the patient also denied the paralysis of another patient sitting in an adjacent wheelchair! (who failed to move the arm on command from the physician.) Here again was, evidence that two seemingly contradictory aspects of self — its the individuation and intense privacy vs. its social reciprocity — may complement each other and arise from the same neural mechanism, mirror neurons. Like the two sides of a Mobius strip, they are really the same, even they appear — on local inspection — to be fundamentally different. Have we solved the problem of self? Obviously not — we have barely scratched the surface. But hopefully we have paved the way for future models and empirical studies on the nature of self, a problem that philosophers have made essentially no headway in solving. (And not for want of effort — they have been at it for three thousand years). Hence our grounds for optimism about the future of brain research — especially for solving what is arguably Science's greatest riddle.