The Disturbing True Story of the Pied Piper of Hamelin 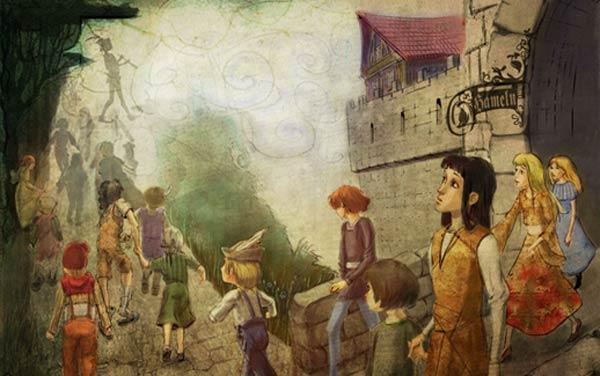 When, lo! as they reached the mountain-side,

As if a cavern was suddenly hollowed;

And the Piper advanced and the children followed,

And when all were in to the very last,

The door in the mountain-side shut fast.

Robert Browning, The Pied Piper of Hamelin: A Child’s Story

Many are familiar with the story of the Pied Piper of Hamelin. Few realise however, that the story is based on real events, which evolved over the years into a fairy tale made to scare children.

For those unfamiliar with the tale, it is set in 1284 in the town of Hamelin, Lower Saxony, Germany. This town was facing a rat infestation, and a piper, dressed in a coat of many coloured, bright cloth, appeared. This piper promised to get rid of the rats in return for a payment, to which the townspeople agreed too. Although the piper got rid of the rats by leading them away with his music, the people of Hamelin reneged on their promise. The furious piper left, vowing revenge. On the 26 th of July of that same year, the piper returned and led the children away, never to be seen again, just as he did the rats. Nevertheless, one or three children were left behind, depending on which version is being told. One of these children was lame, and could not keep up, another was deaf and could not hear the music, while the third one was blind and could not see where he was going.

The earliest known record of this story is from the town of Hamelin itself depicted in a stained glass window created for the church of Hamelin, which dates to around 1300 AD. Although it was destroyed in 1660, several written accounts have survived. The oldest comes from the Lueneburg manuscript (c 1440 – 50), which stated: “In the year of 1284, on the day of Saints John and Paul on June 26, by a piper, clothed in many kinds of colours, 130 children born in Hamelin were seduced, and lost at the place of execution near the koppen.”

The oldest known picture of the Pied Piper copied from the glass window of the Market Church in Hameln/Hamelin Germany (c.1300-1633). Image source: Wikimedia.

The supposed street where the children were last seen is today called Bungelosenstrasse (street without drums), as no one is allowed to play music or dance there. Incidentally, it is said that the rats were absent from earlier accounts, and only added to the story around the middle of the 16 th century. Moreover, the stained glass window and other primary written sources do not speak of the plague of rats.

If the children’s disappearance was not an act of revenge, then what was its cause? There have been numerous theories trying to explain what happened to the children of Hamelin. For instance, one theory suggests that the children died of some natural causes, and that the Pied Piper was the personification of Death. By associating the rats with the Black Death , it has been suggested that the children were victims of this plague. Yet, the Black Death was most severe in Europe between 1348 and 1350, more than half a century after the event in Hamelin. Another theory suggests that the children were actually sent away by their parents, due to the extreme poverty that they were living in. Yet another theory speculates that the children were participants of a doomed ‘Children’s Crusade’, and might have ended up in modern day Romania, or that the departure of Hamelin's children is tied to the Ostsiedlung, in which a number of Germans left their homes to colonize Eastern Europe. One of the darker theories even proposes that the Pied Piper was actually a paedophile who crept into the town of Hamelin to abduct children during their sleep.

One of the darker themed representations of the Pied Piper of Hamelin. Credit: Lui-Gon-Jinn

Historical records suggest that the story of the Pied Piper of Hamelin was a real event that took place. Nevertheless, the transmission of this story undoubtedly evolved and changed over the centuries, although to what extent is unknown, and the mystery of what really happened to those children has never been solved. The story also raises the question, if the Pied Piper of Hamelin was based on reality, how much truth is there in other fairy tales that we were told as children?

Featured image: An illustration of the Pied Piper of Hamelin . Credit: Monlster