tDCS – A Therapy For The Future? 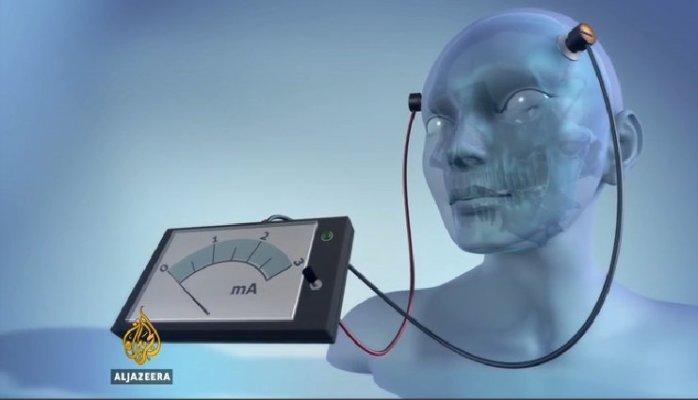 Transcranial direct current stimulation (tDCS) is a non-invasive, painless brain stimulation method which uses electrical currents to modulate neuronal activity in specific parts of the brain. A constant, low intensity current is delivered through small electrodes attached to the scalp in order to either increase or reduce neuronal activity.

This is clearly a trending topic: although interest in tDCS dates back to the 1960s, a search in PubMed reveals that more than half of the articles on tDCS were published in the last two years.

Despite numerous studies on different applications for tDCS, its use is still not generally accepted in the clinical setting; tDCS is not an FDA-approved therapy, remaining mostly an experimental method. Although tDCS has been tested on numerous conditions such as depression, anxiety, schizophrenia, Parkinson’s disease, Alzheimer’s disease, chronic pain, fibromyalgia, and stroke, its efficacy is still largely inconclusive.

Many studies applying tDCS have already been published in 2015, as well as a few reviews analyzing its efficacy for different conditions. By gathering the available information for the application of tDSC in a specific context, reviews are particularly useful, allowing researchers to sort through all the conflicting data. And these have actually shown some promising applications for tDSC.

There have been claims that tDCS can enhance cognition in healthy adult populations, especially working memory and language production, spiking the interest in tDCS as a neuroenhancement tool.

tDCS seems to act as a neuromodulatory technique, inducing a long-term enhancement or reduction of signal transmission between neurons. By strengthening or weakening neuronal connections, it may facilitate learning and memory formation, as well as neural plasticity that contributes to functional recovery after stroke, for example.

However, a review on the effects of a single-session of tDCS showed that it did not have a significant effect on a variety of cognitive function such as language, episodic memory, working memory or mental arithmetic, just to name a few. Nevertheless, it did not exclude the possibility that tDCS may be effective after multiple sessions.

There are in fact many reports from studies in healthy subjects stating that tDCS enhances verbal performance and learning, improving such outcomes as verbal speed, fluency, and amount of verbal learning. These language enhancement outcomes could potentially be quite useful in treating language deficits associated with different pathological conditions. In fact, tDCS has been used to enhance treatment efficacy in post-stroke aphasia rehabilitation and the results seem promising, with tDCS being effective in increasing language skills despite a high variety of stimulation parameters and patient characteristics.

Language enhancement can also be applied to a word reading context. Repeated tDCS application to adults with developmental dyslexia has been shown to significantly improve reading speed and fluency.

Reports supporting a positive effect on memory enhancement can also be found. Different studies have demonstrated an improvement in working memory and episodic memory in healthy subjects, with an increase in accuracy and in response time. But again, the evidences are still considered insufficient for a clinical application.

These memory enhancement effects could be quite useful in both Alzheimer’s and Parkinson’s disease, and in post-stroke rehabilitation. Again, some promising outcomes in these pathologies have been reported, but there are still conflicting results.

Other effects of tDCS have been recently reviewed. An analysis of the reported effects of tDCS in epilepsy showed that there are indications from both animal and clinical studies that it may be a safe and effective treatment.

67% of the clinical studies evaluated in this review showed an effective decrease in epileptic seizures and 83% showed a reduction of epileptic activity between seizures.

tDCS may also have a positive effect on tinnitus, with a transient suppression of tinnitus loudness and annoyance; however, it does not seem to lead to long-term impact on tinnitus related distress. Yet, it is possible that a refinement of stimulation protocols may allow tDCS to become the first effective therapy for tinnitus.

Regardless of how promising tDCS may seem, there are still a number of unsolved issues that hamper its transition into a generalized clinical use. These must be dealt with so that therapeutic protocols can be established. What appears to be consensual is that, as long as stimulation parameters are kept within safety limits, tDCS seems to have no significant unfavorable side effects and to be generally well tolerated by patients, although long-term effects are still to be studied. Given its simplicity and the amount of research being made on tDCS, it seems likely that it may become a generalized therapeutic tool within the next years.

But beware of the commercial exploitation of this technology. Brain stimulation devices are popping up, but if used in the wrong way, they could easily be harmful.