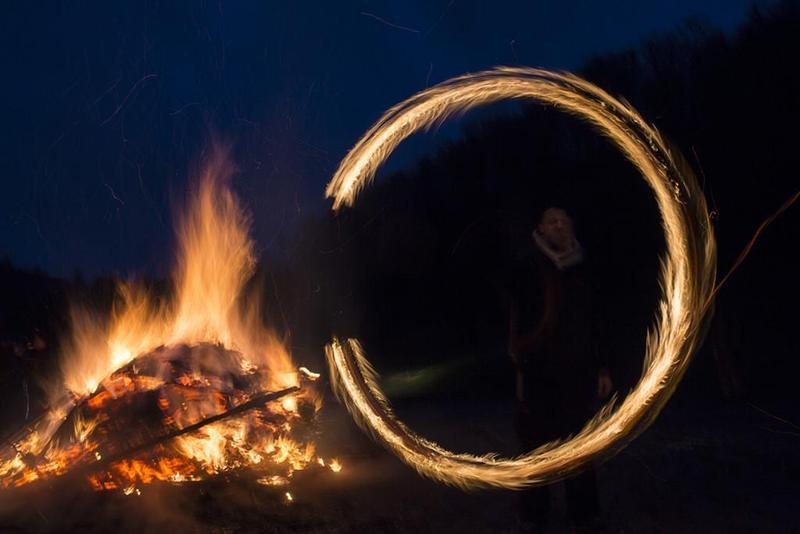 I will be invoking all eight of the Seraphim and Cherubim over the next four weekends. The main ritual that I will be using to perform these tasks is called the Archetypal Gate Ritual in the Order. A prudent analysis of this ritual is probably necessary, so individuals will be able to determine that the methods that I am using to perform these invocations is unique and new in the arena of ritual magick. This ritual is short, concise, efficient and modular in its construction, meaning that it allows for the invocation of all of the Seraphim, Cherubim and the Godhead Elements merely by modifying certain qualifiers in the ritual structure, such as the element (determined by the invoking pentagram), the quality of the spirit (using three devices to differentiate between them), and incorporating specific invocations (in Enochian) and building an Imago of the spirit invoked. All of these qualities are defined and determined in one single ritual. What this means is that the magician does not need to write a ritual for each spirit invoked, the current ritual handles all of the variations. This is a strikingly new methodology in ritual magick.

The archetypal gate ritual was initially designed to invoke one of the four archangels associated with the Four Elements. However, this designation of element to archangel has been shown to be flawed and of recent derivation by the Golden Dawn, so the ritual was redeveloped to invoke either one of the four Seraphim or Cherubim. The rite can also be used to invoke one of the four Godhead Elements, but normally there is less use for such an operation, except in the case of the Abramelin Lunar Ordeal. One must first contact all of the eight guardian angels of the Godhead before attempting to contact it directly in one of its four elemental forms. However, the Archetypal Gate ritual is a significant departure from the typical methods that I have proposed, even than that used in the Invocation of the Angelic Rulers of the Decans. The basic premise of this new technique is to establish the Qabbalistic world and then upon that ritual-construct erect an elemental gate that further qualifies the specific angel to be invoked. The invocation proper is performed on the charged and empowered staff, occupying the middle of the circle, which acts like a physical pylon (three-fold ladder of lights) for drawing down the angelic or godhead spirit through the eye of the gateway.

The ritual pattern of the archetypal gate ritual has the following features performed in the sequence indicated. First, the celebrant produces an inverted pentagram pylon device, which consists of an inverted invoking pentagram of spirit feminine set in the infra-point. Upon this ritual structure is set a “cross-roads” consisting of hexagramic devices set to the four angles of the magick circle. The hexagramic device is not used to invoke a specific planet, but is used to represent the union of masculine and feminine powers and the joining of the inverted and right side equilateral triangles - one symbolizing the female and masculine archetypes, respectively. The cross-roads creates an ideal ritual structure for the performing of an invocation, since it becomes a magickal artifice representing the confluence of magickal powers and the place where the domain of spirit and the material world meet. The cross-road is erected using both a deocil and a widdershins arc, where the first “road” is defined by a line starting in the Southeast angle, and traveling directly to the Northwest angle, and from the Northeast directly to the Southwest angle. The cross-road is walked by the magician, who is projecting a line of force with the transmutar wand held in out in front.

Once the cross-roads is set, the magician circumambulates the circle once widdershins, beginning and ending in the Southwestern angle. He/She then proceeds directly to the center of the circle and draws therein in the ultra-point another simple hexagram and charges it with a violet fluid, which acts as a counter force to the inverted invoking pentagram set in the infra-point.

Then the magician draws a line of force from the infra-point up to the ultra point, joining both nodes together, and creating a central pylon. He/She then draws each of the Angles together through the Ultra-point with the transmutar wand, starting in the Southwestern Angle and proceeding widdershins. This creates a pyramidal vortex, which functions as the basic structure for performing the invocation. So at this juncture in the ritual, we have an Qabbalistic elemental world, and upon it, we have the invoking vortex. At this point in the rite, the magician performs the first invocation of the chosen spirit in Enochian, chanting the Name of the Godhead or Super Archangel repeatedly afterward.

The next step in the invocation process is erecting the elemental gateway and the central invoking pylon, which characterizes the entity that is being invoked, whether it is one of the Seraphim, Cherubim or Godhead Element. The gateway is aligned to the Eastern Watchtower, making it a gateway of realization or resurrection (regeneration), so it is called the gateway of “coming forth by day”, symbolizing the dawning of enlightenment and self-realization, which is most appropriate for the invocation of one of the spirits closest to the Deity. One can easily see the allusion to the Egyptian Book of the Dead and it’s belief in physical resurrection. An invoking pentagram of the specific element associated with the gateway is projected into the core of the gateway tetrahedron ritual structure, thus establishing the elemental quality of the gateway.

The gateway is configured through the use of a trapezoidal cross set to each of the three gate nodes, in this case, the Southwest, East and Northwest, respectively. The trapezoidal cross is a hybrid magickal device that uses the symbolic qualities of the trapezoid to determine an alternate reality, since the trapezoid is reputed to cause strange ghostly paranormal phenomena. Trapezoidal structures can occur over time in a building, such as what is found in an old dilapidated structure whose joints have fallen out of alignment and are no longer square with each other. A building can have trapezoids deliberately incorporated into its design, like the Sears Tower in Chicago. All such structures have been shown to exhibit peculiar paranormal phenomena.

Using the trapezoid in this fashion causes the over-all ritual structure to become an out of alignment prismatic device that fosters “trans-dimensional” phenomena to occur. The eastern gateway using the trapezoidal cross device creates a powerful alternative reality or “domain” where the invoked spiritual entity may be accessed and exchange communications without any barriers or gaps occurring between the magician and the angelic being. This ritual structure is also a way of determining the spiritual domain of the invoked spirit, where the magician enters that domain to commune with the entity in its own rightful place and environment. Such a transition to the domain of the spirit invoked allows for a kind of direct telepathic communication between magician and spirit, and also provides for a transformative initiatory experience for the magician. A scrying session, however profound, can never equal direct contact with a spirit, this is the basic assumption behind this kind of working.

Once the gateway is defined and the magician performs the proper passage through it (via the portal entry gesture and sign), then he/she will set the charge and erect the invoking pylon using the sole tool of the magician’ staff. Using the staff to raise energy was a technique first explained in the basic Elemental working and here it is used to fuse all of the prior ritual structures and levels into a single expression of magickal power. The previous levels have been joined together through the elemental gateway, and a final charge is established in the “domain” of the spirit. This is accomplished in the following manner.

The final actions of the ritual are performed on the staff itself, as it stands supported by the magician’s left hand, he/she uses the right hand to perform the following operations, using either the transmutar wand or the bare hand. The magician draws an invoking spiral at the top of the staff and summons the Unified Intelligence of the Archetype, then he/she draws either a Hexagramic cross device (Seraphim), or a Pentagramic cross device (Cherubim) or a Trigon cross (Godhead) in the center or core of the staff. Then the magician draws the energy set in the infra-point up to the ultra-point through the staff and so establishes the energized pylon of sentient intelligence, summoning the targeted spiritual entity.

At this point in the rite, the magician intones the special invocation of the targeted spirit and describes the nature and characteristics of its being, thereby creating an Imago of its spirit to use for contacting and communicating with it. The magician then intones the Enochian Invocation for the third and final time and begins to chant the name of the targeted entity while visualizing its imago, then slowly, with ever increasing intensity, draws the power of that entity from the top of the staff, down to its base, condensing the magickal archetypal charge and manifesting it according to the further qualification of the Qabbalistic World of Atziluth.

Once the Spirit of the Super Archangel or Godhead is present, the magician communes with it until it has finally faded away. Then the magician proceeds to the East and makes the closing portal gesture, thus departing the Gate, sealing the three gate nodes and the eight points of the circle. The Archetypal Vortex is now closed, but the magician should remain in the circle and meditate for a period of time until all contact with the entity has ended.

This is the basic ritual structure for the Archetypal Gate Ritual, which uses methodologies and tools developed in the Order. I can’t expect individuals who don’t have a copy of this rite to fully comprehend how this ritual functions, but it is my hope that some of its mysteries have been explained. Those who are interested and wish to know more about the Order and its practices can examine the contents of this web site, dedicated to that organization here. Contacting me through that website will help one to gain access to the ritual lore of the Order. However, I would recommend that curious individuals first examine the By-Laws, which can be downloaded from that site.