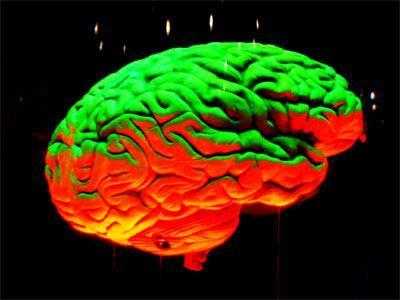 For decades, research studies have suggested that obesity (as well as its frequent partner-in-crime diabetes) harms not only cardiovascular health but also brain function. The neurobiological and metabolic mechanisms behind those deficits have remained somewhat of a mystery. But as scientists are learning more about the critical role white matter plays in cognition, new research suggests that obesity may target white matter integrity, leading to a decline in human cognitive performance.

The importance of white matter structure

Evidence is mounting that white matter, or the glial cells responsible for myelinating neural axons in the brain, actively influences learning and memory. And, according to Alexis Stranahan, a researcher at Georgia Medical College, white matter plays an important role in neural degeneration, both as we get older and we put on too much weight.

"White matter is a vulnerable site. As we age, the myelinated axons get stripped of that myelin. And that takes away the input from the cells of those axons and the cells subsequently degenerate," she says. "And the newer studies looking at obesity suggest that, in addition to degeneration in the context of aging, this kind of degeneration can also happen in the context of diabetes and obesity."

Stranahan likens obesity and poorly controlled diabetes to "accelerated aging," and says that the related white matter damage leads to learning and memory problems. "Brain regions need to be able to talk to each other. It's the network activity that really drives and maintains cognitive function," she says. "So if the lines of communication, those myelinated neurons, are down, it's not surprising that you'd see accelerated cognitive decline."

Accelerated cognitive decline is exactly what scientists do see. Antonio Convit, a psychiatrist at New York University and the Nathan Kline Institute, has observed that obese teenagers show deficits in arithmetic, attention and mental flexibility. And Timothy Verstynen, director of the cognitive axon laboratory at Carnegie Mellon University, says obese individuals do show slight cognitive impairments when tested, similar to the kinds of cognitive issues you may see in aging populations.

"You see associations between obesity and reduced inhibitory control and working memory as well as obesity and increased impulsivity in humans. It's not severe-we're not saying it's a drop in IQ or anything like that. But it is a kind of foggy thinking," he says. "And one possible explanation for this is that obesity's systemic inflammation results in microinflammation at the glial level, targeting the cells in the brain that support myelin."

To provide the foundation for a more direct connection, Verstynen and colleagues recruited 155 healthy adults to see what obesity-related factors may influence white matter structure. The group took a variety of measures, including waist circumference and body mass index, blood pressure, glucose levels and enzymes related to systemic inflammation. The researchers also used diffusion tensor imaging (DTI) to look at each participant's white matter microstructure. They found that inflammation and glucose sensitivity were the two factors that most strongly linked obesity with white matter degeneration. The results were published last year in the journal NeuroImage.

"The fact that these basic things were the most profound mediators of the obesity/white matter relationship confirmed for us that, at least, in these molecular systems, inflammation and insulin sensitivity are the possible mechanisms by which the integrity of neural circuits could go down," he says. "The work in animals points to the idea that white matter changes are happening from the body to the brain. But we haven't shown that in humans yet. We really need good intervention studies to show that changes in the body are, in fact, changing the brain."

Stranahan's lab has shown that interventions do work-at least in a rodent model of obesity and diabetes. She and her colleagues reduced adipose, or fatty, tissue from these genetically modified mice through either an exercise program or surgical excision to see if it would influence learning and memory.

The group discovered that animals that regularly ran on a treadmill for three months prevented microgliosis, or a change to glial cells in response to damage, in the hippocampus. The mice also showed improvement in memory tasks. Researchers found similar results in the mice who had the fat removed surgically. What's more, when they surgically transplanted fatty tissue from the obese mice into normal mice, they saw cognitive impairments develop. The results were published in February 12, 2014, issue of the Journal of Neuroscience.

"It was pretty striking. We saw that the inflammation caused by increasing visceral adiposity through a fat transplant impaired cognition in a normal mouse," she says. "And taking out that visceral fat from an obese mouse makes him smarter."

Mark Mattson, a researcher at the National Institutes of Health who studies how dietary interventions like intermittent fasting, or fasting or eating only a modest meal twice a week, may help slow down neurodegeneration, says it's possible we would see a similar result in humans. That study still needs to be done, but he argues, the current research is another result that shows just how important diet and exercise are to optimal brain health.

"We're learning that obesity really does take a toll on the brain. And to promote optimal brain health, it's important that we challenge ourselves, either through exercise or through changes in diet. There's also evidence that intellectual challenges are important," he says. "These three things result in changes to the brain at the molecular and cellular level. And those changes enhance our ability to learn and remember things, as well as enhance our overall health."

by Kayt Sukel For Dana Foundation