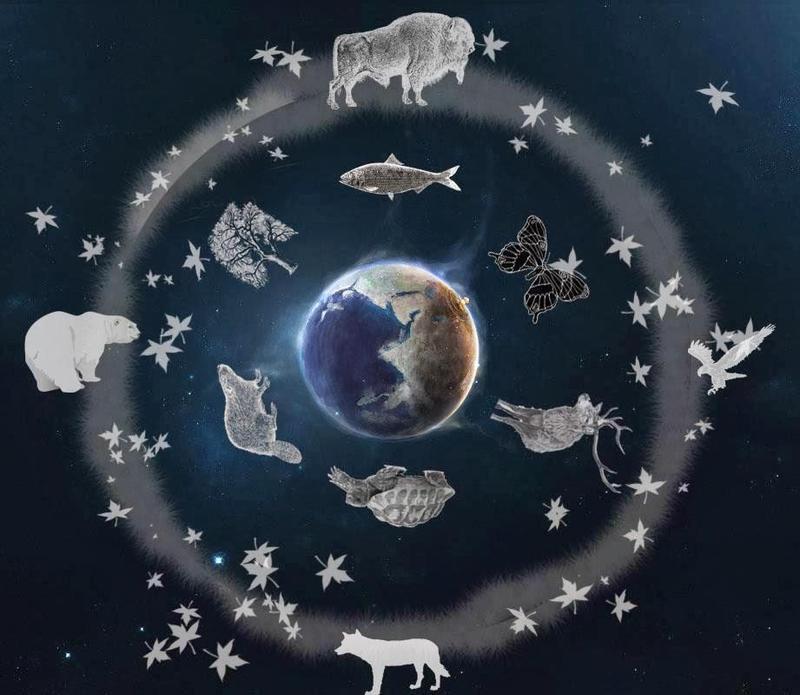 The Native American zodiac signs are wholly unique, and you'll not find these totemic birth animals anywhere else but here.

When Token Rock invited me to offer Native American insights into astrological birth signs, I was invigorated by the idea. And although I've worked with my Native Compatriots for similar birth signs, I knew this would be an opportunity to provide a fresh perspective in this endless realm of wisdom.

Over the course of three days, I worked within a circle of energetic Algonquin liaisons who offered specific suggestions for animals within the range of birth dates. I laid out the traditional birth dates found in classic astrology as a foundation to work within, and the Elders filled in the rest (animals and personality traits inherent to each).

The animal energies selected for each birth sign, I'm told, are native inhabitants of the Rocky Mountains and thus they inhabit regions of Canadian British Colombia, down through the western regions of North America.

It is the Algonquin stance that your birth date is the first drum beat of a fantastic ceremonial dance of life. Furthermore, you make your way through life in-step with your animal counterpart. The two of you dance a pattern that weaves your life experience. And although you will have more than just one animal alliance, these birth animals are always available to share wisdom and help you with your evolutional growth in this lifetime.

Without further ado, here are the Native American zodiac signs made possible via Algonquin wisdom:

A little quirky, and unorthodox, the Otter is a hard one to figure sometimes. Perceived as unconventional, the Otter methods aren't the first ones chosen to get the job done. This is a big mistake on the part of others - because although unconventional, the Otter's methods are usually quite effective. Yes, the Otter has unusual way of looking at things, but he/she is equipped with a brilliant imagination and intelligence, allowing him/her an edge over every one else. Often very perceptive and intuitive, the Otter makes a very good friend, and can be very attentive. In a nurturing environment the Otter is sensitive, sympathetic, courageous, and honest. Left to his/her own devices, the Otter can be unscrupulous, lewd, rebellious, and isolated. See other water totems here.

Deeply emotional, and wholly passionate, the Wolf is the lover of the zodiac in both the physical and philosophical sense of the word. The Wolf understands that all we need is love, and is fully capable of providing it. Juxtaposed with his/her fierce independence - this Native American animal symbol is a bit of a contradiction in terms. Needing his/her freedom, yet still being quite gentle and compassionate - we get the picture of the "lone wolf" with this sign. In a nurturing environment the Wolf is intensely passionate, generous, deeply affectionate, and gentle. Left to his/her own devices the Wolf can become impractical, recalcitrant, obsessive, and vindictive. See also this page on Wolf totem meanings.

A natural born leader, the Falcon can always be looked upon for clear judgment in sticky situations. Furthermore, the characteristics for this Native American animal symbol never wastes time, rather he/she strikes while the iron is hot, and takes action in what must be done. Ever persistent, and always taking the initiative, the Falcon is a gem of a personality to have for projects or team sports. The Falcon can be a little on the conceited side - but he/she is usually right in his/her opinions - so a little arrogance is understood. In a supportive environmental the Falcon "soars" in his/her ability to maintain passion and fire in relationships, and always remaining compassionate. Left to his/her own devices, the Falcon can be vain, rude, intolerant, impatient, and over-sensitive. See more information on Falcon meanings here.

Take charge, adapt, overcome - this is the Beaver motto. Mostly business, the Beaver is gets the job at hand done with maximum efficiency and aplomb. Strategic, and cunning the Beaver is a force to be reckoned with in matters of business and combat. One might also think twice about engaging the Beaver in a match of wits - as his/her mental acuity is razor sharp. The Beaver has everything going for him/her - however tendencies toward "my way or the highway" get them in trouble. Yes, they are usually right, but the bearer of this Native American animal symbol may need to work on tact. In a nurturing environment the Beaver can be compassionate, generous, helpful, and loyal. Left to his/her own devices the Beaver can be nervous, cowardly, possessive, arrogant, and over-demanding. Learn more about the Beaver totem here.

This Native American animal symbol is the muse of the zodiac. The Deer is inspiring lively and quick-witted. With a tailor-made humor, the Deer has a tendency to get a laugh out of anyone. Excellent ability for vocalizing, the Deer is a consummate conversationalist. This combined with his/her natural intelligence make the Deer a must-have guest at dinner parties. Always aware of his/her surroundings, and even more aware of his/her appearance, the Deer can be a bit self-involved. However, the Deer's narcissism is overlooked because of his/her congeniality and affability. In a supportive environment the Deer's natural liveliness and sparkly personality radiate even more. He/she is an inspiring force in any nurturing relationship. Left to his/her own devices the Deer can be selfish, moody, impatient, lazy, and two-faced. Read more about Deer totems here.

Woodpeckers are usually the most nuturing of all the Native American animal symbols. The consummate listener, totally empathic and understanding, the Woodpecker is the one to have on your side when you need support. Of course, they make wonderful parents, and equally wonderful friends and partners. Another proverbial feather in the Woodpeckers cap is the tendency to be naturally frugal, resourceful, and organized. In a nurturing environment the Woodpecker is of course caring, devoted, and very romantic. Left to his/her own devices the Woodpecker can be possessive, angry, jealous, and spiteful. Learn more about Woodpecker meanings.

Electric, focused, intuitive, and wholly creative, the Salmon is a real live-wire. His/her energy is palpable. A natural motivator, the Salmon's confidence and enthusiasm is easily infectious. Soon, everybody is onboard with the Salmon - even if the idea seems too hair-brained to work. Generous, intelligent, and intuitive, it's no wonder why the Salmon has no shortage of friends. This Native American animal symbol expresses a need for purpose and goals, and has no trouble finding volunteers for his/her personal crusades. In a supportive environment, the Salmon is stable, calm, sensual, and giving. Left to his/her own devices, those that bear this Native American animal symbol can be egotistical, vulgar, and intolerant of others. See symbolic meaning of fish here.

Pragmatic, and methodical the Bear is the one to call when a steady hand is needed. The Bear's practicality and level-headedness makes him/her an excellent business partner. Usually the voice of reason in most scenarios, the Bear is a good balance for Owls. The Bear is also gifted with an enormous heart, and a penchant for generosity. However, one might not know it as the Bear tends to be very modest, and a bit shy. In a loving environment this Native American animal symbol showers love and generosity in return. Further, the Bear has a capacity for patience and temperance, which makes him/her excellent teachers and mentors. Left to his/her own devices the bear can be skeptical, sloth, small-minded and reclusive. Read more about Native American bear symbolism here.

Highly enthusiastic, and a natural entrepreneur, the Crow is quite a charmer. But he/she doesn't have to work at being charming - it comes easily. Everyone recognizes the Crow's easy energy, and everyone turns to the Crow for his/her ideas and opinions. This is because the Crow is both idealistic and diplomatic and is quite ingenious. In nurturing environments this Native American animal symbol is easy-going, can be romantic, and soft-spoken. Further, the crow can be quite patient, and intuitive in relationships. Left to his/her own devices, the Crow can be demanding, inconsistent, vindictive, and abrasive. Learn more about Raven symboism here.

Most shamans are born under this Native American animal symbol. The Snake is a natural in all matters of spirit. Easily attuned to the ethereal realm the Snake makes an excellent spiritual leader. Also respected for his/her healing capacities, the Snake also excels in medical professions. The Snake's preoccupation with matters intangible often lead others to view them as mysterious, and sometimes frightening. True, the Snake can be secretive, and a bit dark - he/she is also quite sensitive, and caring. In a supportive relationship the cool Snake can be passionate, inspiring, humorous, and helpful. Left to his/her own devices, the Snake can be despondent, violent, and prone to abnormal mood swings. Learn more about the Snake totem here.

Changeable and mutable as the wind, the Owl is a tough one to pin down. Warm, natural, with an easy-going nature, the Owl is friend to the world. The bearer of this Native American animal symbol is notorious for engaging in life at full speed, and whole-hearted loves adventure. This can be to his/her detriment as the Owl can be reckless, careless, and thoughtless. Owls make great artists, teachers, and conservationists. However, due to his/her adaptability and versatility - the Owl would likely excel in any occupation. In a supportive, nurturing environment the Owl is sensitive, enthusiastic, and an attentive listener. Left to his/her own devices, the Owl can be excessive, overindulgent, bitter, and belligerent. Learn more about Owl totem meanings here.

If you want something done - give it to the Goose. Persevering, dogged, and ambitious to a fault, the Goose sets goals for accomplishment, and always obtains them. The goose is determined to succeed at all cost - not for the approval of other - but those with this Native American animal symbol competes with his/her own internal foe. Driven is the watchword for the Goose's dominating personality trait - which makes them excellent in business and competitive sports. When tempered with supportive, nurturing family and friends, the Goose excels in all things he/she attempts. In a loving environment the Goose can be very passionate, humorous, gregarious, and even sensual. However, lead to his/her own devises, the Goose may fall into obsessive or addictive behaviors that will inevitably be his/her demise.