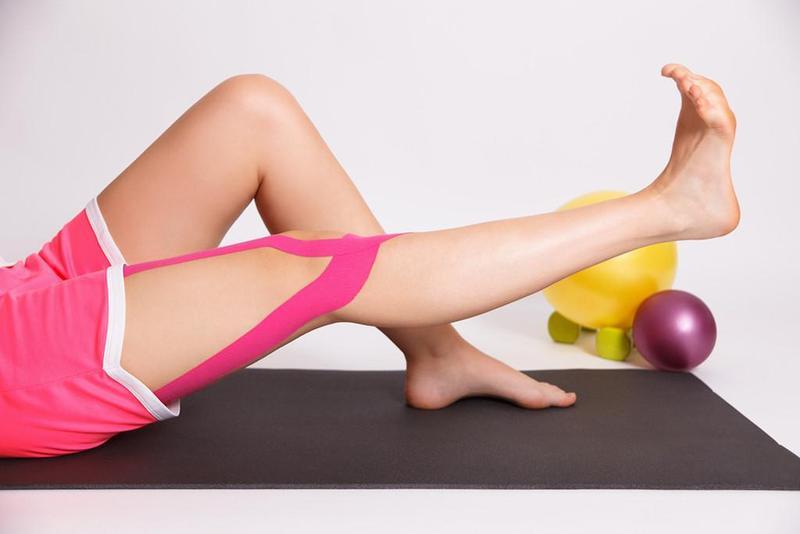 Kinesio Tex Tape was created and developed by Dr. Kenzo Kase in 1973. It is a treatment that is felt to prolong the effects of physiologic work done. After many unsuccessful attempts to use adhesive tapes that were commercially available, Dr. Kase developed Kinesio Tex Tape.

What is the Kinesio Taping Method?

The Kinesio Taping Method is felt to cause physiological effects on several body systems. The systems affected by the body are thought to include the circulatory/lymphatic, neural, muscular, and fascial systems, as well as the joints. Kinesio Taping is currently being used by therapists to change muscle tone, move lymphatic fluids, correct movement patterns, and improve posture. The Kinesio Taping Method is a unique method of applying Kinesio Tex Tape in a specific manner to create change in the aforementioned systems. Benefits of using the tape are that it is more economical over time than other modalities, it is easy to learn and apply, there are less types of tape, and it may be used over a longer period of time.

The Kinesio Taping Method differs from athletic strapping tape and the traditional McConnell Taping Method. Athletic strapping tape is used mostly to limit ranges of motion and to constrict muscle movement. The effect of this method is to create a bridge over the areas that are injured so that athletes can perform sport movements and have either prophylactic support or support to an injured part of the body. Athletic tape is typically removed after the end of an athletic event.

The McConnell Taping Method is a technique that tapes body parts to affect a specific biomechanical movement. McConnell Tape uses a very rigid, highly adhesive tape that is applied for no more that 18 hours and often for shorter periods of time due to patient discomfort.

Kinesio Tex Tape is a newly popularized modality that is used by therapists trained in the Kinesio Taping Method by Certified Kinesio Taping Instructors (CKTI). Kinesio Tex Tape is a latex-free hypoallergenic cotton fiber tape with an acrylic heat-activated backing that stretches only along its longitudinal axis. The tape can be stretched 40%-60% of its resting length. The tape has no medicinal properties. The thickness and weight of the tape is designed to approximate the weight and thickness of skin.

Who is using Kinesio Tape?

How does it work?

The following are the current theories of how properly applied Kinesio Tape works.

On skin, the Kinesio Tape pulls the upper layers of skin, creating more space between the dermis and the muscle. The space created is believed to relieve pressure on the lymph channels in the area between the muscle and the dermis, creating more space for lymph flow and thus better lymph drainage through an affected area. This space also houses various nerve receptors that send specific information to the brain. When the space between the epidermis and the muscle is compressed, such as during an injury, these nerve receptors are compressed and send information to the brain regarding continuous touch, light touch, cold, pain, pressure, and heat. This information causes the brain to send out certain signals to the body on how to react to particular stimuli. Kinesio Tape alters the information that these receptors send to the brain and causes a less reactive response in the body, allowing the body to work in a more normal manner and removing some of the roadblocks that normally slow down the healing process.

Kinesio Tape also is felt to affect deeper tissues in the body. Increased space theoretically allows muscles greater contractility, which in turn pushes more fluid through the muscle, resulting in better muscle performance. The end results are believed to be reduced muscle fatigue, increase in range of motion, and better quality of muscle contraction.

Kinesio Tex Tape is used to improve joint alignment by affecting the muscles and fascia and can reduce poor function of a joint by influencing opposing muscle groups and joint mobility.

Fascia and lymph have an intimate relationship with each other. Fascia is a material that divides and separates the muscles and internal organs and helps to provide support against gravity in some parts of the body. Lymph removes fluids and chemical substances in the muscles. Lymph channels pass though fascia between the bone and the muscle and superficially between the skin and the muscle. Lymph ducts range in size from smaller than a hair to 2 cm lymph nodes. Major lymph channels can be found in the groin, neck, and armpits. When the flow of lymph is restricted or increased, an accumulation of fluid occurs behind the congested area, resulting in swelling that decreases space between the muscle and skin, causing the body to react to a painful stimulus.

The working model gives rise to the basic theoretical concepts of the Kinesio Taping Method. There are six basic concepts of the Kinesio Taping technique called corrections. They are: mechanical, fascia (fascial), space, ligament/tendon, functional, and circulatory/ lymphatic. Mechanical corrections are used for improved stability and biomechanics. Fascia or fascial corrections create or direct movement of fascia. Space corrections are used for decreasing pressure over a target tissue. Tendon/ligament corrections decrease stress on a ligament or tendon. Functional corrections provide sensory stimulation to either assist or limit a motion. Circulatory/lymphatic corrections help move lymphatic fluid from more congested to less congested areas.

Kinesio Taping has also been shown to affect scars. Reductions of adhesions and pitting, softening, flattening, improved pliability, and reduction of contractures have been seen in some patients.

by Jayson Goo For Medicine net