Home/Articles/Islamic and Arabic Contributions to Astrology

Islamic and Arabic Contributions to Astrology 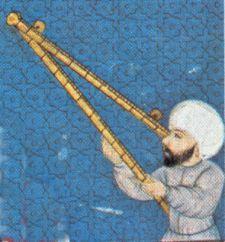 While both astrological historians, Jim Tester nor Peter Whitfield, don't come right out and say it, probably because it would be politically incorrect to do so, it was obvious to me that once allied with their Roman sponsors Christians were the ones who precipitated the Dark Ages with their determination to eradicate all pagan practices, including Greek philosophies which ironically were actually quite compatible with their religion, had they taken the time to give it some thought. Clearly it was easier to pick up the sword, something the Romans definitely knew how to wield.

Of course Rome had been trying to eliminate astrology, at least from their competitors, for centuries, a feat which religious fervor definitely reinforced. Nonetheless, the knowledge considered to be pagan and therefore undesirable persisted, largely through its retention via the work of the Greeks which ultimately found refuge in the Arab lands. I find it interesting that truth and knowledge have a knack for surviving, in spite of man’s best efforts at eliminating it.

Justinian closed the philosophical schools in Athens in 529 CE at which time their instructors and most likely their students as well fled the hostile Christian environment for Persia. This not only served to preserve the knowledge accumulated by the Greeks but also provided it to the Persians who were gradually becoming united and strong under their relatively new Muslim faith. The Arabs were not particularly creative or innovative but as their culture became more unified and they spent less time warring with competing tribes their interest in more civilized pursuits such as learning mathematics, science and astronomy/astrology increased.

This was facilitated by the establishment of the House of Wisdom in Baghdad where the work of Greek philosophers such as Plato, Aristotle, Euclid and Ptolemy were translated into Arabic.

Prior to the 8th century, the Arabs had no astronomy but during the 8th and 9th scientific developments increased in Baghdad and later infiltrated Islamic Spain in the 10th century. Clearly modern Jews aren’t falling all over themselves to claim that one. Masha’Allah derived his knowledge from the Greeks, Sasanian and Indian traditions and noted that significant world events were marked by conjunctions of Saturn and Jupiter such as the biblical flood and the births of Christ and Muhammad. This work was furthered by astrologers, al-Kindi and his student, Abu Ma’shar.

Much of the philosophical basis for astrology as well as other occult science practices such as magic and other forms of divination were developed by al-Kindi, who was born into an aristocratic family at the end of the 8th century. No doubt some modern physicist will someday uncover these effects and make claim to them, but astrologers will certainly know better.

Astronomy was one scientific study embraced by Islam due to its justification in the Koran where it states “He it is who hath set for you the stars, that ye may guide your course by them amid the darkness of the land and the sea.”

Two devices used to study the stars, the astrolabe and zij, were not invented by the Arabs though they can be credited with developing and perfecting them. The astrolabe could be used to determine the time from the Sun or stars as well as the degree on the ascendant, key information for any astrologer; the zij was a compendium of mathematical astronomy which provided data and formulae for calculating celestial positions as well as data pertaining to other disciplines such as trigonometry and geography. The spirit of these volumes persists today in references such as those published by CRC Press of Boca Raton, Florida, e.g. “CRC Standard Mathematical Tables,” a volume familiar to any student of higher mathematics, physics, or chemistry in modern times.

Besides his own contributions, al-Kindi’s student, Abu Ma’shar, was another major force in Arabic astrology who lived a long and productive life between 787 – 886. The influence of the outer planets, particularly their conjunctions and Ptolemaic aspects, likewise continue to be studied today with Neil F. Michelsen’s “Tables of Planetary Phenomena” one of modern astrology’s standard works, along with the ephemeris, the likely successor of the zij.

Ma’shar wrote extensively on katarchic and electional astrology and is credited with adding to the number of Lots which should be calculated. He credited the lunar nodes with influence equal to the planets, including possessing exaltations, which is somewhat contradictory to the principle of rays developed by al-Kindi since the nodes are points where the lunar orbit crosses the ecliptic as opposed to physical entities. He also originated the concept of progressing a chart, specifically the influence of transiting planets on the degrees occupied by natal planets.

Astrology thrived in Arabic regions for at least three centuries, or until the time that knowledge which had been preserved from the Greek via translation to Arabic was being translated to Latin between 1050 – 1250. Tester states “What was passed on to by the Arabs was essentially late Greek astrology. It is very difficult to determine the contributions to the tradition actually made by the Arabic astrologers.” However, Whitfield goes into considerably more detail and builds a strong case that Arabic astrologers did indeed contribute to astrology, both as an art and science. While they may not have invented some of the techniques, they nonetheless advanced and sometimes perfected them, which deserves credit. To not acknowledge their work would be akin to claiming today that Japan has not contributed to the advancement of electronics, Japan being another culture where submission is considered a virtue such that innovation is implicitly discouraged. Nonetheless, those who have the ability to take another culture’s invention and expand upon it should be recognized.

The fact that the works of Ma’shar such as “Abbreviation of the Introduction to Astrology” and his “Great Introduction” are still in use and studied today speaks volumes along with the use of fixed stars and Lots, both of which are still utilized by modern astrologers. Arabs not only preserved astrological techniques developed by the Greeks but expanded upon them substantially, apparently to a sufficient degree that Campion will devote an entire future olume to addressing it. Something tells me that Tester along with modern science is missing something.