How to Act Less Stupid, According to Psychologists 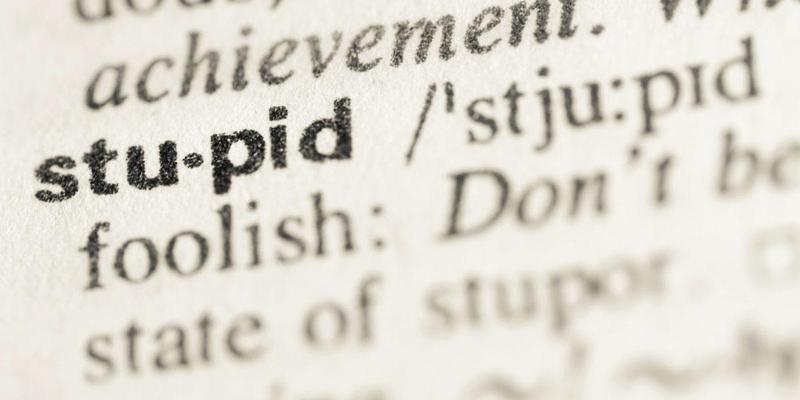 Over the course of any given day, the average person sees plenty of odd behavior. A bizarre outfit or a strange conversation, an unfamiliar gesture or anything, really, that doesn't fit into the realm of acceptable behavior.

One of the most common breaches, one of the things that tends to give us pause more than anything else, is something — or some things, really — that we like to call stupid.

That thing that happened.

That thing that person did.

It was SO. STUPID.

The word is used so freely, and yet we rarely — if ever — stop to consider what exactly we mean by it. If anything, we have a sense of what it doesn't mean: that calling something that someone did stupid doesn't imply that that person is not smart. Plenty of people with high IQs, after all, still manage to do things we regard as "stupid."

But that doesn't quite answer what "stupid" is, or what the significance is of how we use it. Missing a stop on a train, or walking into a stationary object, because a person was enthralled by a book — we call that stupid, but surely it's something else, something more precise.

Intrigued, Balazs Aczel, a professor at the Institute of Psychology at Eotvos Lorand University in Budapest, wanted to find out more. He had taken an interest in studying the bizarre world of unintelligent behavior, precisely, he says, because it's surprisingly unexplored. In this case, he devised a study. Aczel, along with Bence Palfi and Zoltan Kekecs, two other psychology researchers at Eotvos Lorand University, gathered a sample of stories — 180 in all — from news sites, blogs, forums and other publicly available literature in which an action was described that might be characterized as stupid. The stories were then presented to more than 150 people, who were asked to fill out a questionnaire.

For each story, they answered a range of questions, which included ones like "Would you describe this particular action as stupid?" and, if the answer was yes, "On a scale from one to ten, how stupid was it?" The participants were also asked to explain why they thought any given action was stupid, by choosing one of many categories.

What they found is that people tend to agree about what deserves to be called stupid and what doesn't — remarkably, there was a roughly 90 percent rate of agreement. They also learned that there are, it seems, three situations, that we tend to use the word stupid for. Three scenarios, characterized by specific types of behavior, that make people cringe or laugh or put their hands to their forehead.

The first is what Aczel and his team call "confident ignorance." It's when a person's self-perceived ability to do something far outweighs that person's actual ability to do it, and it's associated with the highest level of stupidity.

Think of a drunk driver, who wrongly believes he or she is perfectly capable of manning the wheel. Or a burglar, who, meaning to steal a phone, instead plucks a GPS device, which leads the police straight to him.

People don't just find this type of behavior stupid — they seem to associate it with the highest level of stupidity. These were given a mean stupidity score of 8.5 out of 10, a good deal higher than that for any other.

"The stupidest thing someone can do is overestimate themselves," he said. "What that tells us is that you don’t have to have a low IQ, in people’s eyes, to act stupidly. You just have to misperceive your abilities."

He couldn't help himself

The second thing we use the word stupid to describe is when someone does something because they have, on some level, lost their ability to do otherwise.

Aczel calls this "lack of control" and characterizes it as the result of "obsessive, compulsive, or addictive behavior." He offers the example of a person who decides to cancel plans with a good friend in order to keep playing video games at home.

What a space cadet

The third type of behavior people like to call stupid is what Aczel coins "absentmindedness — lack of practicality." It's an either/or scenario, in which someone does something that's clearly irrational, but for a reason that could be one of two things: they either weren't paying attention or simply weren't aware of something.

Think of someone who, having overfilled their car tires, ends up on the side of the road with a flat. That person either forgot to pay attention while filling the tires or didn't know that he or she needed to do so in the first place. And we're apt to call both of those scenarios stupid, albeit less stupid than the previous examples.

Is stupid is as stupid does?

In some ways, Aczel's research recalls the famous and oft-quoted scene from "Forrest Gump," in which Tom Hanks, asked whether he's crazy or just plain stupid, quips, "Stupid is as stupid does."

The research, as it turns out, offers important lessons for all of us, because what we choose to call stupid actually has a significant impact on our behavior. As Aczel and his colleagues write in their paper:

These stupidity categories can potentially predict what environmental or inner states increase the likelihood that one would behave in a way that others could call stupid. For example, ingested substances or excessive social support can promote confidence disproportionate to competence. Executing habitual behaviors or multi-tasking can lead to absentmindedness. Intensive affective states can result in failure of behavior control. Our findings would suggest that these environmental or inner contexts make us more susceptible to commit foolishness. An interaction of individual differences and environmental factors may serve as predictors for people's propensity to show behavior that others would label as stupid.

The lessons may be particularly relevant for people who think of themselves as pretty smart.

Take the work of Daniel Kahneman, a Nobel Laureate and professor of psychology at Princeton University who, using arithmetic questions, has found that intelligence can make simple answers harder to find.

He hasn't figured out why, but hypothesizes that intelligent people might be less capable of evaluating themselves, making them more vulnerable. When given a math problem, for instance, an intelligent person might assume they aren't capable of the same thinking errors that their peers are, which, in turn, makes them more prone to commit them.

That hypothesis — thinking you are above making mistakes when in fact you're not — fits nicely into the most egregious form of stupidity Aczel was able to identify: the category of "confident ignorance."

It also seems to point toward a useful takeaway.

Acting in a way that isn't considered stupid is a goal shared by most reasonable people, but many of them likely overlook one key attribute that might allow them to better achieve it: modesty.

"If you don't want to do something stupid, you probably don't want to have higher expectations of your abilities than you should," Aczel said. "The worst thing someone can do is act confidently, and seriously, and still not act rationally. That's as stupid as it gets."