Home/Articles/Historical Facts about the Baptism of Poland

Historical Facts about the Baptism of Poland 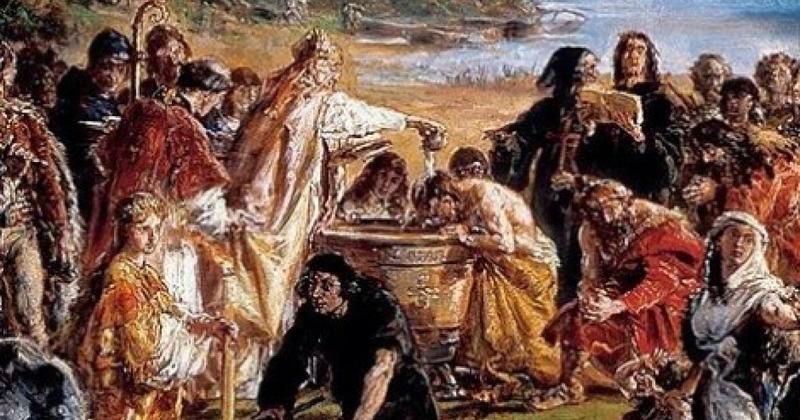 Introduction of Christianity, painting by Jan Matejko from 1889. Mieszko I is on the right leaning against the cross with the sword in his hand; on th

small , Historical Facts about the Baptism of Poland , Introduction of Christianity, painting by Jan Matejko from 1889. Mieszko I is on the right leaning against the cross with the sword in his hand; on th , chrzest_polski_-_zaprowadzenie_chrzescijanstwa_z_cyklu_dzieje_cywilizacji_w_polsce_0_0.jpg

The introduction of Christianity to Poland is symbolically linked to the founding of the Polish state, and is also the first firm date in the history of Poland. But while the event enabled Poland to enter the realm of Western Latin civilization and become a fixed part of it, as well as its farthest outpost, its true impact and the reasons that led to it are complex and surprising.

With the christening of its first ruler, Mieszko, Poland symbolically entered into the orbit of Western civilization, and its name appeared for the first time in the annals of Medieval historians. 966 is precisely the moment when the historical memory of Poles starts. Other, earlier records of Poland belong to the domain of unverifiable fantasy – like the mythical father of all Poles, Lech; King Popiel (who was eaten by mice); or Piast, the founder of the dynasty that bred Mieszko.

In other words, it is with the baptism of Mieszko that Poland leaves the realm of its undocumented mythical Slavic past and becomes a crucial element in the stream of ‘universal’ Western history.

When did it happen?

What do we know about this seminal event? While much early Polish history rests in the realm of historical obscurity, the date 966 shines relatively bright in the surrounding darkness. The date comes up in an early Medieval chronicle (Rocznik Kapituły Krakowskiej) and reads exactly ‘DCCCCLXVI Mesco dux Polonie baptizatur’ (‘966 - Mesco, the duke of Poland, is baptised’). Most historians today generally agree with this date. In fact, they even ventured an exact date – 14th April, 966.

Where did it take place?

We don’t know precisely where the baptism of Mieszko took place. The most likely answer is that the ceremony took place in Poznań on the river island called Ostrów Tumski. Archaeologists point to the little Church of Saint Mary the Virgin in Summo.

We also don’t know who was present at the ceremony. The Christian official in charge of the affair could have been Jordan, a monk from Germany or Italy who later became the first bishop of Poland, while the godfather was probably the father of Mieszko’s wife, Czech king Boleslaus.

A baptism should end with the baptised getting a new Christian name. The conjectures made by historians suggest that Mieszko was baptised either Michael or Dagobert. This latter hypothesis (along with the mysterious document Dagome iudex, dating back to 991) have even provoked speculation as to the possible Norman origins of the first Polish ruler. While this theory has since been generally discarded, Mieszko’s background is still subject to discussion.

Likely born in the 920s, Mieszko was born to Siemomysł, a ruler of the Piast dynasty, a family belonging to the local Slavic tribe of Polans, with Gniezno in Wielkopolska as their possible family seat. In the course of the late 9th and 10th centuries, the family was able to subjugate the majority of the Wielkopolska (Greater Poland) region. Historians connect these early military successes of the Piast dynasty with the new concept of his military retinue, a quasi-army called drużyna, whose soldier members were paid regular wages (rather than sharing war booty).

The popular version of the christening of Poland – as related in Medieval chronicles – links the baptism of Mieszko with the influence of his wife Dobrava, a Czech princess and a devout Christian. According to this romantic and uplifting tale, it was her exemplary moral attitude and perseverance that led Mieszko to adopt Christianity. As Gallus Anonumous, the author of the earliest Polish history, writes, she wouldn’t share a bed with Mieszko until he had adopted Christian mores. The truth, however, may be more political. Marriages in those days played a role similar to political treaties. By wedding Dobrava, the daughter of Boleslaus I the Cruel of the Přemyslid dynasty, Mieszko entered a political union with the ruler of another powerful Slavic kingdom.

The birth of the nation

Seen in this light, the baptism itself becomes an event of key political importance. It was also no accident that Mieszko decided to adopt Christianity through Czech mediation. The Czech kingdom had an early tradition of Christianity (it was Christianized in the late 9th century) and close ties with the German Reich (of which it was a part). By adopting Christianity from a fellow Slavic and a quasi-equal ruler, and not the German emperor, Mieszko was shunning the auspices of the German Reich, which could have meant potential political subjugation.

Today most historians agree that without Christianisation, Poland (or this early incarnation of Poland) wouldn’t have survived. Even without venturing into the realm of alternative history, one can reasonably assume that adopting Christianity meant also that the Slavic tribe of Polans avoided the fate of many other tribes and ethnicities of the region which rejected Christianity and are now just names in history books. This pertains particularly to the once powerful Western Slavic tribe of the Veleti (Polabian Slavs, like Polans belonging to the so-called Lechite tribe) inhabiting the areas of today's Eastern Germany or Prussians, who once lived across vast and inaccessible areas ranging from Lithuania to the Masurian lakes.

Very soon Poland adopted the role of preacher of the gospel to pagan tribes. Performing missionary activities meant sometimes encountering violence. The martyring of Saint Adalbert of Prague (997), which occurred while he was on a mission to the Prussians in Pomerania, was an element of this process. The death of Adalbert, who became the first Polish saint (Święty Wojciech), was used by the Polish king Boleslaus to raise his prestige as a Christian ruler. Following the Congress of Gniezno in 1000, the town became the seat of the first Polish archdiocese, independent from Christian centres in Germany.

The baptism of Mieszko meant bringing to Poland the entirety of Western Latin civilisation, with its Christian stone architecture, Roman law, and education. Mieszko’s grandson and the third ruler of the dynasty, Mieszko II, was already thoroughly educated – he studied not only Latin but also Greek. Much in the fashion of the German Otton court, the Piasts deemed education as indispensable for ruling a European kingdom.

But more importantly, the christening was instrumental in facilitating the internal reforms needed in such a young state. This goes for the organisation of the Church (whose structures and officials were used in pursuing administrative goals), administrative system and diplomacy, which all functioned in a country which was now an equal part of the sphere of Christian Europe.

All this allowed for the impressive expansion of the state ruled by the Piasts. While at the time of his baptism Mieszko ruled over a territory that was limited to Wielkopolska, Kuyavia and parts of Mazovia, the kingdom at his death in 992 included Silesia, Małopolska (with Kraków), and possibly Pomerania. The territorial expansion was continued during the aggressive reign of Mieszko’s son Boleslaus the Brave, with expansion towards the west and the border on the Oder River and incursions as far east as Kiev.

At the height of his rule Poland stretched from the Oder to Grody Czerwieńskie. The expansion was accompanied by symbolical gestures of political recognition, like the Congress of Gniezno of 1000 during which Boleslaus met with Otto III and was likely pledged the king's crown. This eventually materialized shortly before his death in 1025 when Boleslaus was crowned, becoming the first king of Poland. All of this is naturally unimaginable without the earlier Baptism of a Slavic duke called Mieszko and the subsequent Christianising of the country.