Home/Articles/Elmina Castle and its Dark History of Enslavement, Torture, and Death

Elmina Castle and its Dark History of Enslavement, Torture, and Death 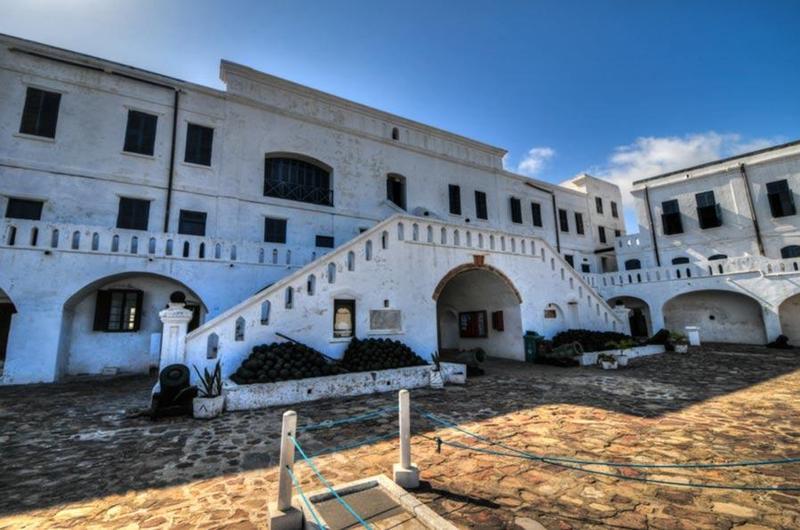 Elmina Castle is a white-washed Medieval Castle on the coast of Ghana. It was the first – and for many centuries – the largest, European building constructed in tropical Africa. Yet its grandeur, as well as its picturesque surroundings with blue skies, sandy beaches, and tropical palms, disguise a dark history – Elmina Castle was the last place that thousands of African slaves would ever see of their homeland. Many horrors transpired within the walls of the fortress, which have never been erased by time.

The beginning of Elmina Castle

Located on the western coast of present-day Ghana (the former gold coast), the town of Elmina is about 13 km (8 miles) from the city of Cape Coast. A region rich in gold and ivory resources, the area was home to 30 or so “slave forts” concentrated along the coast, and was the first European slave-trading post in sub-Saharan Africa. These fortified castles were built between 1482 and 1786 by numerous traders including the Portuguese, Swedish, English, Danish, and Dutch.

Between 1482 and 1486, the Portuguese constructed what became known as Elmina Castle, also called St George’s Castle. One of the main purposes of Elmina Castle was to give support to ship captains by providing their vessels with a secure harbor. The outposts were heavily armed against assault from the sea, but interestingly, not so much from attacks inland. An assault from other European empires, including pirates, was deemed more likely than those by local Africans. To fend off such attacks from the sea, cannons were used, whereas light gunfire was usually enough to counter an assault from the interior.

Jean Barbot, who authored the book, Description of the Coast of North and South Guinea (1732), visited Elmina Castle in 1682 and gave this eye witness account:

“This castle has justly become famous for beauty and strength, having no equal on all the coasts of Guinea. Built square with very high walls of dark brown stone so very firm that it may be said to be cannon-proof. On the land side, it has two canals always furnished with rain or fresh water sufficient for the use of the garrison and ships-canals cut in the rock by the Portuguese (by blowing up the rock little by little with gun powder ). The warehouses either for goods or provisions are very largely and stately always well furnished.”

It is said that European explorers who heard of the riches of West Africa through traders traveling through the area made several unsuccessful voyages to reach Elmina. They were either unable to pass through the sandy bars or were so scared of malaria that they did not land. However, not put off by the dangers, Portuguese explorer Diogo de Azambuja made it to the West African coast in 1471, and landed at a spot named “La-Mine”. It was he who would later build Elmina Castle.

The Later Years of Elmina Castle

Although it was originally erected to protect the gold trade, following its capture by the Dutch in 1637, Elmina Castle came to serve the Dutch slave trade with Brazil and the Caribbean. The castle later developed as a point on the infamous slave triangle transporting human cargo to America and the Caribbean, as well as raw materials, such as cotton and rubber, to Britain, and manufactured goods, such as clothing and weaponry, back to the West Coast of Africa.

Under the auspices of the Dutch West Indies Company, around 30,000 slaves a year passed through Elmina until 1814 when the Dutch slave trade was abolished. Ceded to the British in 1872, Elmina Castle was rarely in use until Ghana’s independence from the Britain in 1957. Thereafter, it became a training centre for Ghanaian police recruits and even a school for a short while, before being converted into a historical museum.

Life and Death at Elmina Castle during the Slave Trade

The days of the slave trade may be long gone, but the interior of the castle is still a haunting reminder of the past.

Not knowing what awaited them on the slave ships, those who made it to Elmina Castle were held captives in the castle’s dungeons and subjected to all kinds of indignities, torture and humiliation. The dark, airless dungeons in the basements were oppressive and received sunlight from only two tiny windows.

Slave traders would cram more than 1,000 slaves, with no water or sanitation, into a space that could barely fit around 200 people. These dungeons were uncomfortably cramped, filthy, and outbreaks of malaria and yellow fever were common. Food was scarce and disease was rampant. Prisoners sometimes had to spend up to three months in such unsanitary conditions before they were shipped to the New World. At the seaboard side of the castle is the infamous ‘Door of No Return’, which was a portal where slaves boarded ships that would take them on the treacherous journey across the Atlantic known as the Middle Passage.

Revolts by slaves at Elmina were met with strong oppression. Some captives were either murdered outright, while others were placed in solitary confinement in an airtight, dark holding facility in the courtyard where they were starved to death.

Thousands of slaves, both men and women, were chained outside and forced to stand in the blazing sun. They could be made to lift heavy cannonballs as punishment and women were often raped by the guards.

Elmina Castle, like other West African slave sites, also housed luxury suites for Europeans in the upper levels of the castle. Upstairs, the officers’ quarters were light and spacious with parquet floors and gorgeous sea views. It is difficult to imagine how they could live such a life of comfort while thousands languished beneath their feet.

Despite its atrocities, the castle also once served as a missionary sanctuary and housed a church.

Today, Elmina Castle is preserved as a Ghanaian national monument and it was designated as a World Heritage Monument under UNESCO in 1972. It is an extremely popular destination for African American tourists seeking to connect with their heritage and a powerful reminder of the history of the slave trade. However, unfortunately the castle has begun to fall into disrepair due to lack of maintenance.

“The road leading to the fort has partly been washed by sea waves and outboard motor mechanics are also using part of the road as fitting shops,” reports MyJoyOnline.

A plaque next to the condemned dungeon door which reads: “ In Everlasting Memory of the anguish of our ancestors. May those who died rest in peace. May those who return find their roots. May humanity never again perpetrate such injustice against humanity. We, the living, vow to uphold this. ”(Wikimedia Commons )

The 30 or so surviving castles and forts found along Ghana’s coast bear witness to the largest forced migration in history and also to the atrocities humanity is capable of committing. Elmina Castle now pays respect to the millions of people who suffered at the hands of slavery.