THE JOURNEY OF THE FOOL THROUGH THE TAROT - DAY FIVE: THE EMPEROR 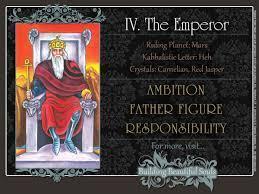 The next person the Fool encounters is the Father in the figure of the Emperor.

He is the representative of structure and authority. As a baby leaves his mother's arms, he learns that there are patterns to his world. Objects respond in predictable ways that can be explored. The child experiences a new kind of pleasure that comes from discovering order.

The Fool also encounters rules. He learns that his will is not always paramount and there are certain behaviours necessary for his well-being. There are people in authority that will enforce such guidelines. These restrictions can be frustrating, but, through the patient direction of the Father, the Fool begins to understand their purpose.

If the Empress is the Mother archetype of the Tarot deck, the Emperor is the Father. He sits upon a large stone throne, adorned with four rams’ heads (symbolic of his connection with Aries and the planet Mars). In his right hand, the Emperor holds an ankh, the Egyptian symbol of life, and in his left is an orb representing the world over which he rules.

He wears a red robe, indicative of his power, passion and energy for life. Underneath it, he wears a suit of armour, suggesting that he is protected from any threat (and any emotional response or vulnerability). His long white beard is symbolic of his age-old wisdom and experience, and along with his gold crown, he is an authority figure who demands to be heard.

Behind his throne looms a tall, impenetrable mountain range, signifying that he is backed by a solid foundation but resistant to making any changes unless he deems it necessary. Beneath the peaks flows a small river, giving some hope that despite his tough exterior, he is still an emotional being – it will just take a lot of digging and trust to open him up to his softer side.

As the father figure of the Tarot deck, the Emperor suggests that you are adopting this fatherly role (regardless of whether you are male or female), providing for your family, and protecting and defending your loved ones.

You may be the breadwinner or the ‘rock’ for those who rely on your stability and security.

Similarly, the Emperor represents a powerful leader who demands respect and authority.

Status, power and recognition are essential to you, and you are most comfortable in a leadership role where you can command and direct others. As a leader, you rule with a firm but fair hand. You have a clear vision of what you want to create, and you organise those around you to manifest your goal. You listen to the advice of others, but you prefer to have the final say. Conflict doesn’t scare you, and you won’t hesitate to use your power to protect those you care about. And in return, those people will repay you with the loyalty and respect you deserve. Claim your authority as leader and influencer and don’t let others put you down.

The Emperor reflects a system bound by rules and regulations.

You create law and order by applying principles or guidelines to a specific situation. Create calm out of chaos by breaking down any problem into its parts and then mapping out the actions you need to take to resolve it. Be systematic, strategic and highly organised in your approach, and stick to your plan until the end.

Through the course of your life, you have gained valuable wisdom and life experience, and now you enjoy offering guidance, advice, and direction to someone who might benefit from it. You may be a teacher, coach, boss, or just a good friend who likes to take what you have learned and pass it on so that others can be as wise and powerful as you.

Numerology Of The Card:

The Emperor Card is 4. This number has a long-standing association with angels and their desire to serve, assist, protect and create opportunities for our growth and success. The number 4 is also about stability, structure, and getting things done.

Astrology Of The Card:

The Astrology of this card is Aries. This first sign of the Zodiac is direct, independent, assertive, self-assured, and known for taking charge and getting things done. A true go-getter, this sign is always ready to kick-start a project. Sometimes Aries is a better leader than an actual doer, but its commitment to the quest is unquestionable.