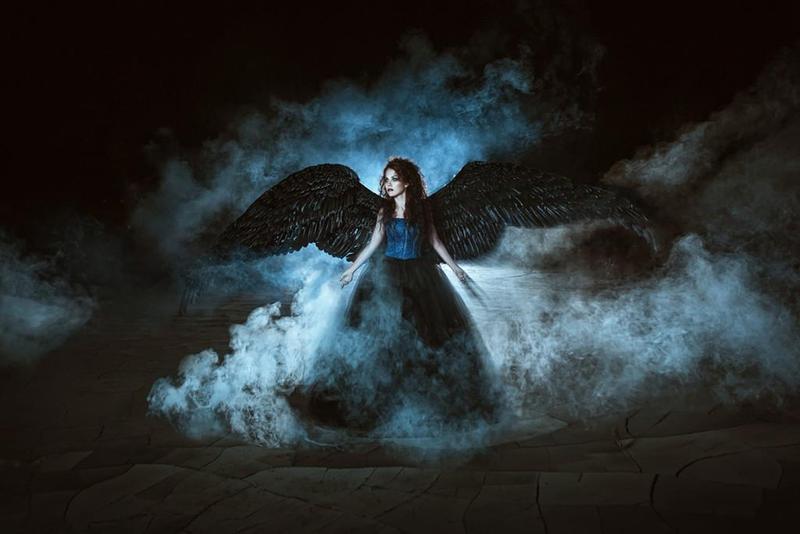 Sweet dreams are made of these

Who am I to disagree?

Travel the world and the seven seas

Everybody's looking for something

Some of them want to use you

Some of them want to get used by you

Some of them want to abuse you

Some of them want to be abused

Two of the more unusual spirits associated with the medieval witch are the succubus and incubus. The succubus is female, the incubus, male, and they’re generally of the variety of demonic spirits that seek sexual union with their victims. In addition to the familiar spirit, the succubus and incubus functioned as either the lover of the witch or as a tool to sexually attack targeted victims. In some cases the alluring powers of the succubus became associated with the witch, and the incubus could be both her familiar and lustful companion. Reports of these two types of demons were often remarked upon when interrogating witches and wizards during the early renaissance. What they actually were (or are) is a matter of debate. They later became mythic themes that, because of their illicit sexual nature, caught the “sweaty” imaginations of prelates and populous alike. Due to their popular nature, they are still to be found, in some form or another, today. Just do a internet search for “succubus” or “incubus” and witness the volume of what you discover.

Curiously, the root word for both succubus and incubus is the Latin verb “cubare” (to lie), where incubus means to “lie upon,” and succubus means to “lie under.” The incubus was known as a demon that would lay upon the body of a woman, causing her nightmares and paralysis. The succubus would somehow get between the sleeping man and the bed and enfold him. These were supposedly demonic entities that were intimately and sexually involved with human beings, representing a unique class of spirits. Where demons usually would possess the body of their victims by inhabiting their soul, an incubus or succubus would consort with their victims, thereby externally draining their life-force. They usually appeared in dream form (at first), causing heightened erotic fantasies, sleep paralysis and nightmares, and often resulting in some kind of unbidden orgasm.

These entities were well known and identifiable targets of exorcism and banishing/blessing rites used by both Christians and Jews starting from the late middle ages. (There was a special section for these demons in the “Malleus Maleficarum.”) Later on, it was said that witches and wizards had demon lovers (but of course!), and that these beings could even take on physical bodies. Still, according to Thomas Aquinas, demons were considered bi-sexual, so the succubus and incubus were interchangeable facades for the same spirit. This inherent reasoning stated that the succubus would consort with men, thereby collecting their seed, and then transform into an incubus, thus injecting the collected seed into a female victim. Perhaps this was a way of explaining nocturnal emissions or unavowed pregnancies due to incest or rape.

A child born of such a supposed supernatural liaison would itself have supernatural qualities. Great heros (such as Gilgamesh) and magicians (Merlin) were reputed to be the spawn of these kinds of spiritual entities. While the incubi were essentially nameless (other than “incubus”), the succubi were explicitly named and associated with various attributes of Lilith. So now we come to the really important core of the mythic image of the succubus-incubus, and that is its association with the ancient she-demon known as Lilith.

Lilith was reputed to be Adams first wife, but she refused to submit to him (a fancy way of saying she refused to lie underneath him). Because of this insubordinate refusal, she was cast out of paradise by Yahweh, who then fashioned Eve as her replacement. Later, she became the consort and mother of demons and preyed upon young children and adolescent males. Lilith was known to the ancient Akkadians and functioned in their spirit list as a kind predatory she-demon, and was later considered one of the demonic queens. Yet as time passed on, she was forgotten by all except the Hasidic Jews, who still put written charms against Lilith on their children’s cradles and beds, and this practice continued well into the early 20th century. The 19th century saw Lilith return in the form of popular culture in Europe, becoming a fallen, romantic and rebellious literary trope. The late 20th century also witnessed Lilith’s elevation to that of a Goddess in some sects of modern witchcraft. I have previously discussed Lilith as being associated with the Nephilim, but that’s another topic for another time.

Succubi and incubi have been morphed into the modern day literary and media vampires, as tempters and temptresses or masquerading as various kinds of illicit supernatural liaisons. They can also be found representing your typical negative and obsessively sexual encounter, whether real or imagined. Unrequited love and sexual obsession seem to be the key to these kinds of themes, and we are today obviously quite fascinated with them. (I wonder what that says about us?)

While there are few examples of the mechanism for summoning an incubus or succubus into manifestation, it would seem that a terribly unfulfilled sexual obsession and a willingness to give oneself up to excess, dissipation and perverse morbidity would readily produce the desired phenomenon. Throw in some strategically placed black candles, then lying down naked in a satanically adorned magick circle in the open “pentagram” posture, while ardently summoning a demon lover, should also do the trick.

As for controlling what was conjured and safeguarding one’s self, such thoughts would be invariably dispensed with altogether, making such an operation quite dangerous (and rather stupid). I might also add that there is a marked difference between formulating a tryst between oneself and one’s satanic godhead (if the magician is distinctly of the LHP persuasion) and inviting an incubus or succubus to take possession of oneself. The former is a liturgical operation of the Left Hand Path, and the latter, a desire for sexual self-destruction.

Lustfully seeking out a demon lover is very likely a symptom of deeper problems and issues. It could very well denote an unhealthy appreciation of sexuality, and perhaps an inability to find a suitable human partner. Unfulfilled sexual hunger, coupled with an innate ability to connect with occult forces or supernatural entities can be a terrible combination imbued with dire consequences. The fruit of such a combination is seldom positive. A modern analog is the seething addiction for online pornography that haunts individuals who are functionally incapable of having a sexual relationship. I know first hand how this kind of addiction can really consume an individual who has lost contact with the real world of human interaction, and it is a bitter and unsatisfying surrogate for a real sexual relationship.

Perhaps an aspect of the modern incubus or succubus can be found within the massive underground commercialization of sex that appears nearly everywhere. Religious conservatives both hate and fear this commercial underworld, and yet seem incapable or unwilling to really stop it. Our overall cultural fear, loathing, shame and fascination of all things perversely sexual gives it enormous power in our media saturated nation. Eliminating the guilt, fear and shame is likely the first step in reducing the power of negative sexuality. Such media sexuality has even invaded occultism and the practice of magick, and it can be found on the internet, along with everything else. (Also, mixing LHP with pornography has gotten quite a following these days, as the ever-popular “Goetia Girls” site has demonstrated.)

Don’t get me wrong, as a pagan I do support a very libertarian approach to sexuality in our society. I am also against any form of censorship or legal intervention that would constrain or curtail the sexuality of consenting adults. However, I know the pangs of unrequited love and the unfulfilled need for sexual release from my early adult years, and I also know that they can produce all sorts of problems, both social and psychological. These internal forces, if not properly dealt with, can even manifest as abusive and self-destructive relationships in the real world. I have witnessed a number of women continuing to engage with their “demon lovers” while being terribly used and abused. I have also experienced some of this abuse first hand from my own demon lovers. Perhaps the succubus and incubus have become social euphemisms for bad and abusive relationships that should otherwise be decisively ended, but are too psychically entangled to be ever terminated. Witness the fact that men or women can free themselves from years with an abusive lover, only to quickly fall prey to yet another abuser.

Fortunately, I have discovered that various levels of spiritual self-love, personal alignment with the Godhead, and matriculating the “Lover Within” can be used as powerful healing tools to eliminate negative relationships and their long term effects. So, too, can being honest about one’s intimate associations, determining what is truly needed and good for oneself, and most importantly, listening to the warnings of caring family and friends. Breaking cycles of abuse can be powerfully rewarding and uplifting, thereby releasing a person from their own cycle of self-destruction and allowing them to pursue relationships which are progressive and self-empowering.

Enchantresses, enchanters, vampires and vampiresses, and demon lovers of all kinds may seem to be fascinating and powerfully alluring, but they are merely tools for self-destruction. You may toy with them, and you might even have short and intensely pleasing encounters; but if you get hooked by your own hungers and needs, then you will have a very bad time - if you survive. In my opinion, there is no greater mechanism for total self-destruction than the stoking and amplifying of unfulfilled desires. (So, let’s all get it on, be released, and be a lot happier!) You’ve been warned!