Candomble: The African-Brazilian Dance in Honor of the Gods 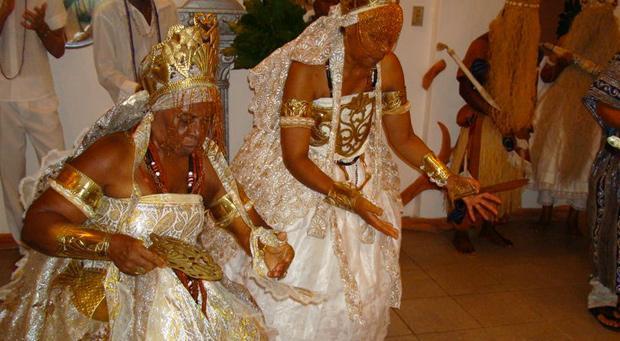 Candomblé (meaning dance in honor of the gods) is a religion found primarily in Brazil with a number of elements derived from African cultures. It not only incorporates some religious aspects of Yoruba, Bantu, and Fon African societies, but it gradually integrated some characteristics of Catholicism as well. It can be argued that Candomblé represents the syncretism that transpired following the cultural interaction between people of African descent and Europeans. Although Candomblé does not have Holy Scriptures, the moving oral tradition has remained quite strong since its formation.

The Rise of Candomblé

Africans, who were transported to Brazil by the Portuguese between the 16th and 19th centuries by means of the slave trade, brought with them a plethora of cultures and philosophies. However, many of these spiritual beliefs were completely eradicated shortly after their arrival. Church leaders and slave owners encouraged Africans to convert to Christianity in order to satisfy their moral and religious obligation. This was partially effective as Catholicism became the principal religion for the slaves.

However, whilst the fear of persecution meant that many fully succumbed to the new religion imposed upon them, others sought a connection amongst themselves. Africans from Bantu found a similar system of worship to the indigenous people of Brazil. This connection led the people to re-learn other forms of ancestral worship and created several new religions. Though some have died out, Candomblé is one of the practices to have been created by the displaced peoples.

Thus, many Africans appeared to adhere to Catholicism whilst being devoted practitioners of Candomblé. During the early stages of its development, Africans in Brazil created Catholic fraternities but practiced Candomblé in secret. The reason being that they saw similarity between the saints and deities but feared persecution, so the divine symbols of their gods were “concealed” behind corresponding Catholic saints. Being partially faithful to Catholicism was also seen as a way to assimilate into the new society and to minimalize oppression.

Unfortunately, once Candomblé came to the knowledge of church leaders and slave owners there was a strong movement to erase the followers’ religious convictions. Africans who followed the practice would often be faced with tragic outcomes. Catholics considered Candomblé to be ungodly, and thus incomprehensible, so they often attacked the African-Brazilian churches.

To make matters worse, there were various “government-led public campaigns and police action” (Omari-Tunkara, 2005) to instill further distress in the people. Nevertheless, when a law that required police permission to hold public ceremonies was terminated in the 1970s, the widespread oppression and abuse of those who practiced Candomblé ceased.

The name Candomblé (which is now the most common written form) originates from the Kingdom of Congo, and the word corresponds to a Bantu-family language. It was referred as “Batuque” prior to the 19th century and it is known as “Macumba” in some parts of Brazil, (although this particular group is said to have slight differences in its practice).

Some enslaved Africans in Brazil were also transported to Brazil from North Africa and brought with them Islamic ideas that were later incorporated in Candomblé as well. This branch is known as the “Males”— they have different spiritual affiliations, worship on different religious days, and the clothing practitioners use is similar to Muslims in the Middle East.

Two million people currently practice Candomblé and though it is primarily established in Brazil, it can also be found in small numbers in other Latin American countries including Argentina, Venezuela, Colombia, and Uruguay.

At its essence, the African-Brazilian religion of Candomblé is polytheistic - with adherents believing in a chief god and minor divinities. The main god Oludumaré (also known as Olorun) is said to be “served” and accompanied by many lesser deities—the orixas, also known as voduns and nkisis. The concept of orixas derives from Yoruba culture, the voduns from the Ewe and Fon peoples, and nkisis come from the Bantu nation of Congo.

There are currently more than 400 orixas included in the Candomblé religion, and individually they are associated with particular natural forces, such as animals and food. Devotees of the religion believe that each individual has their own personal orixa who protects them and is reflected in their personality, however one is required to fulfil their own destiny and not just rely on the orixa. Collectively, orixas are called Egungun or Baba Egum. Baba Egum also regulate the moral principles of Candomblé and are said to be responsible for continuing the moral codes generation upon generation.

Sacred Temples in Candomblé: The Terreiros

The sacred buildings for followers of Candomblé are terreiros or casas (meaning temples or houses). These structures have both internal and external parts that are used specifically for the povo do santo (people of the saint –followers of Candomblé) as well as designated shrines for the many gods.

Traditionally, worshippers must enter terreiros in clean garments and splash their skin with water before arriving, to rid themselves from impurities of the world and to ultimately satisfy the deities. Priests and Priestesses inside the terreiros dress as Baba Egum and lead the religious ceremonies.

According to Bastide, the first “official temple” (2001) was established in Bahia in the 19th century and it has had an important presence in the Brazilian city ever since. This may be partly due to the fact that Candomblé temples also served as places for the planning of rebellions against church leaders and slave owners during their early stages of development. In fact, the Candomblé sect “Males” were usually the ones to initiate revolts against their oppressors.

In modern Candomblé, one of the most significant aspects of worship includes music and dance. The Candomblé mass involves celebration, “spirit possession” (Wafer, 1991), and the sacrifice of animals. Specific choreographed dancing occurs both to facilitate spirit possession and to keep the practitioners entertained.

Another interesting feature of the religion, according to Matory, is that Candomblé can be considered to be “matriarchal” (2005) as women are regarded as “mothers of the holy one.” Women often spiritually manage Candomblé services and take on roles as apprentice priestesses for future services. In Candomblé, women are highly respected members within the community.

As with most religions, the meetings and sense of community are very significant for the followers of Candomblé. Practitioners of this faith believe that the congregation essentially allows for the integration of people and spirits to occur. It is also seen as an opportunity for feasts and the acknowledgement of important religious days.

Today, Candomblé is quite popular and fully celebrated in the north east of Brazil. Bahia, to be specific, receives people from several African countries yearly to visit the churches and learn about the religion from the followers themselves.

Candomblé is thought by many to be a force that increased the recovery of the cultural identity that was stripped from African-Brazilians due to the slave trade. In fact, some devotees are now trying to remove Catholic iconic images from worship as they feel that Candomblé has been diluted over time to appease the government and the Catholic Church. The vital purpose for these practitioners is to return Candomblé to its purer form.