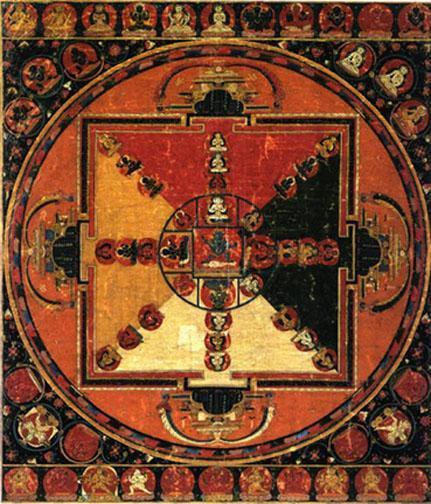 Adorned in bright red robes, the monks of Drepung Gomang Monastery rub metal tubes together as if they were trying to generate fire with sticks. Instead, sound and sand are produced with the scrapes and taps.

The colors of the sand replicate the shades of a rainbow. And so these Tibetan Buddhists who are touring America use the resulting stream to create this work of art called a mandala, a figure to them that represents the universe.

For three days, they’ve been laboring with care in the Bingham Theater at Actors Theater in Louisville. As speakers for the Festival of Faiths share their stories with hundreds next door, the men here speak mostly among themselves with occasional laughter.

While others teach with words, theirs is a story revealed by sight.

The process of using these metal tubes is a recent technology, said the tour leader Geshe Tsewang Thinley.

“Many centuries ago, many years ago, we used the fingers like this,” he said while pinching the air.

Even the concept of new to the Tibetan seems old to many of us Westerners.

Born as a refugee in India, Thinley has never set foot on the land that he now teaches others about. And at present, it's uncertain if he ever will return to the Tibet of his ancestors. China rules the country now. An escape to India in 1959 by the Dalai Lama helped to ensure his culture and religious traditions would survive.

Their flight from their home country would force the notoriously private Tibetan monks to open up to the world.

Thinley’s monastery of 2,000 monks continues to uphold these customs, albeit in Karnataka, India. This yearlong tour of America allows the men to raise money for their monastery’s programs and expenses, as well as to educate others about interfaith harmony, Buddhist teachings and Tibetan life.

“Loving kindness and compassion is not only for Buddhists,” Thinley said. “This is for all sentient beings.”

His hands clasp a set of prayer beads in which he twirls as he speaks, and I wonder if I’m keeping him from his meditations. In front of us, a monk on the floor speaks an ancient language then giggles.

On Wednesday afternoon, the first day of the festival, a fellow follower of Buddha addressed the crowd in the next theater over. His name is Anam Thubten, the Dharmata Foundation founder who receives acclaim for his transcendent talks and meditative sessions throughout the world.

Before he begins, he closes his eyes and stands for a moment in silence. Small, quiet reflections seem to permeate his moment-by-moment life.

Unlike Thinley, Thubten was born in Tibet and considers the grandparents who raised him to be his first spiritual teachers. During the session on Media and The Public Trust, the Lama spoke of his childhood Tibetan tales that were filled with both rich folklore and sacred perceptions.

Eventually, he said he came to realize life as a story, one that every human can create

“Life is an amazing, playful, sacred dance that is unreal yet extremely real,” Thubten said. “We should hold it as a beautiful flow of many stories and journeys.”

Opening your heart at all times to each experience and emotion of the present moment can help along the way, he said. Embrace the now and know that both joy and suffering are blessings.

While the journey may not end, the construction of the mandala will. On Saturday, after hours and hours of labor, the monks will destroy their creation, sweeping the grains away in a ceremony dictated by ritual. The remnants will then be walked to the Ohio River in a silent procession, and deposited in its waters.

Nothing is permanent, this act reminds us, a very Buddhist precept.

Yet the sands that once created a masterpiece will continue their travels, perhaps riding the free-flowing current as far as the wide-open sea.

by Amanda Beam For Courier-Journal