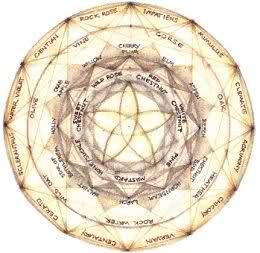 On the journey of healing into awareness - one takes many detours. This week I read a client who has found the beauty and power of Bach Flower remedies. As with everything you do to heal yourself, this may or may not be your answer. All you can do it try. You could also surround yourself with fresh flowers in your favorite colors. Flowers work and make great presents. The thirty-eight flower remedies discovered by Dr. Edward Bach were described by him as bringing courage to the fearful, peace to the anguished and strength to those who are weak.

Bach flower remedies are dilutions of flower "essences" developed by Dr. Edward Bach. They are similar to homeopathy in many respects and form a part of alternative medicine. Some researchers believe that they exert their claimed effects via the placebo effect, however practitioners feel the "energetic signature" of the flower can be transmitted to the user and affect a person's psychological state.

One difference between homeopathy and Bach flower remedies are the methods used to produce them, called "potentization": the sun method and for the hardier plants the boiling method, both invented by Bach. Another difference is that Bach remedies are used to treat the mental symptoms believed by practitioners to be the root cause of the disease treated. Bach flower remedies are not dependent on the theory of successive dilutions, and are not based on the Law of Similars, which states that the signatures of toxic substances will stimulate the immune system to fight off a pathogenic condition that is currently expressing those same symptoms. The Bach Remedies are all derived from non-toxic substances, with the idea that a "positive energy" can redirect or neutralize the "negative energy".

There are thirty-eight original Bach remedies plus "Rescue RemedyTM", each prescribed for certain mental and emotional problems. They form a complete system with which practitioners treat every variety of human emotional imbalance. Other systems of remedies have been developed by practitioners who have access to flowers that are indigenous to other regions, and that were therefore unknown to Bach.

Each remedy is used alone or in conjunction with other remedies, and each flower is believed by advocates to impart specific qualities to the remedy. Up to six or seven remedies are typically mixed together by a naturopath or other healer for each patient to meet his/her individual needs. The remedies are used primarily for emotional and spiritual conditions, including but not limited to depression, anxiety, insomnia and stress.

The best-known Bach flower remedy is "Rescue RemedyTM," a pre-blended combination of Rock rose, Impatiens, Clematis, Star of Bethlehem and Cherry Plum remedies. The ingredients are believed to relieve acute stress, anxiety, and panic attacks, especially in emergencies. Rescue Remedy is taken as needed, and is available either in a small spray-bottle, in a glass bottle with an eye-dropper. Drops are generally taken under the tongue. Rescue is also available in the form of "Rescue CreamTM" which is rubbed into the skin.

Rescue Remedy and other Bach flower remedies are used on household pets and domestic animals, and have been claimed to be effective in calming them and improving problem behaviours. No controlled studies support these claims. Some people claim that they are also useful for the treatment of diseased plants. Research on the effects of a particular remedy is done by case reporting with consensus review by other users. For example, one person will report that using a particular remedy seemed to help with 'X', then other users will then focus on that same condition either in treating themselves or patients, and will report findings. Results found in this manner are often skewed by a confirmation bias. More formal studies, whether finding for or against the remedies, have all suffered from small sample sizes and questionable research methodologies.

Makers of "flower remedies" all over the world have created thousands of additional remedies based on the original principles invented by Bach. The term "flower essences" is also commonly used these days, especially when referring to the non-Bach flower essences being made. Along with the sun-bowl method of preparation pioneered by Bach, a few other techniques have been developed which have been found effective, including some non-cutting methods.

Currently over 400 small (i.e., one or two people) to medium (i.e., up to fifteen or so employees) flower essence makers are active around the world, from Alaska to Australia, Brazil and India. In Britain alone over sixty different makers are registered with the British Association of Flower Essence Producers (BAFEP). Bach's work has inspired a tremendous area of research worldwide. Some makers are producing other "vibrational essences," using sources such as minerals/gemstones, nonflowering plants, sea life, mushrooms, cacti, metals, intuitive methods, and natural environments.