The Enneagram and the Tarot Part Two: The Swords 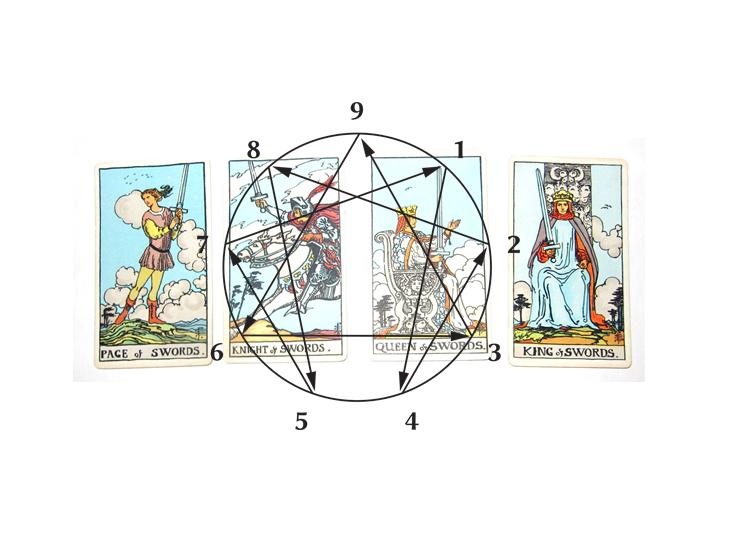 As stated in the previous article, the Enneagram and the Tarot both allow us to put language to our self discovery. The Enneagram categorizes your fears and desires in order to help you grow and become your best self. The tarot on the other hand is a tool for inner guidance and is used to uncover and name your deepest beliefs, challenges, and motivations. Combining the two is a powerful way to elevate their individual messages.

The Tarot is complex, but the cards have three general purposes:

1)The Major Arcana help you to examine the universal truths within your situation.

2)The Minor Arcana (ace through ten) allow you to explore your actions and choices.

3)The Court Cards assist you in understanding your fears and motivations.

The Enneagram, on the other hand, is a set of nine distinct personality types defined by a person’s core fears and core motivations. All people display all nine types in some form, but we each have one core Enneagram number that drives us. By exploring the Enneagram you can deepen your understanding of your reactions to the world around you. There is a clear parallel between the language of the Enneagram and the court cards within the Tarot.

Historically the suit of swords represent air, the mind, and intellectual pursuits. They can also represent taking on challenges, facing conflict, and moving forward. Similarly, fives in the Enneagram value curiosity, developing the mind, and observing the world around them. They are analytical and enjoy bringing clarity to confusion. The swords in the tarot reflect many of the strengths and weaknesses of Fives in the Enneagram. All of the sword court cards have a base number of five in these explorations. The second number reflects that card’s individual strengths and weaknesses.

The Page of Swords embodies the strengths of fives and sevens in the Enneagram. They are bold and brave. They move with haste, knowing that they move with a purpose. The Page is able to observe what is happening around them without becoming emotionally involved. They are innovative, curious, analytical, and a gatherer of facts. The page doesn’t want to focus on emotions, instead they find facts and experiences to be a priority. Freedom, ambition, energy, and adaptability are essential to the Page.

In reverse the Page of Swords can show the darker side of fives and sevens. They are hard edged and emotionally unavailable. They can be unfocused, impatient, impulsive and act too quickly. They often take on too much and can become so focused on their goal that they forget the present. The Page of Swords’ biggest fear is being worthless or incapable. Because of this they have a tendency to place all of their value in facts, information, and knowledge that they gather. Their own emotions can feel intrusive. They can overwork and become hyperfocused on their task or their goal, pushing all emotions, relationships and experiences beyond it away.

The Knight of Swords shows many of the positive aspects of fives and threes in the Enneagram.  They move boldly forward. They use their intelligence, wit, and ambition to move at full speed ahead. The Knight is analytical, detached, curious, and self reliant. They are not afraid to state their goal, take the leap, and boldly go where none have gone before. The Knight’s image is important to them and their ambition is something they are proud of.

In reverse, the Knight of Swords shows the darker side of fives and threes. They are in their own head, afraid of being useless, incapable or incompetent. They have a tendency to withhold themselves from others, emotionally detaching. They might feel separate from others, putting on a show to keep up their appearance of success and ambition. In reverse the Knight might have bitten off more than they can chew, chasing their big new goal. They have a tendency to become so goal oriented that they forget the present, as if they have blinders on.  Conversely, the Knight in reverse might be feeling stuck, not sure how to get started moving toward their goal.

The Queen of swords when upright can display all of the strong aspects of fives and sixes in the enneagram. She is independent, wise, and grounded. The Queen knows how to set clear boundaries and is not afraid to seek support when it is needed. She is pragmatic, asks the hard questions, and is strong in the face of adversity.

In reverse, the Queen of Swords can show some of the weaknesses of fives and sixes on the Enneagram. Her biggest fears are to be seen as worthless and to be without support. She allows her anxiety to get the best of her and might not be thinking clearly. Often when in reverse the Queen of swords is either emotionally detached or emotionally reactive.

The King of Swords shares many of the assets of fives and eights in the Enneagram. He is an intellectual powerhouse. He expresses himself and his truth with deep conviction. The King is independent, analytical, detail oriented. He is resourceful, justice oriented, and grounded. The King of Swords doesn’t let his emotions cloud his judgement.

In reverse, the King of Swords can represent the darker side of fives and eights. The King’s biggest fear is being useless and being vulnerable. In reverse the King might be detached, hyperfocused on data or facts without considering emotional components. He doesn’t like seeing others' vulnerability because he sees it as a weakness, and will shut down others who display it. His own emotions can feel intrusive, so the King will avoid them at all costs when in reverse. He might be misusing his power or authority, because his ego (or fear of vulnerability) is running the show. He has a low tolerance for misinformation and people who spread it. In reverse, the King might lack decisiveness. Typically he is clear headed and of able mind, but in reverse he is struggling to see the full picture.

The Enneagram is so much more complex than these explorations give it credit for. All people experience all nine types within themselves in completely unique ways. The benefit of this exploration is that it allows us to put language to those experiences in new contexts. The drawback is that it almost turns the Enneagram types into caricatures, particularly when Tarot cards are used to represent real people in our lives. Just know that the intention of these articles is to add depth to a tool already in place for self reflection and growth. It is meant to increase self awareness around our own fears and motivations, not to dilute the Enneagram or represent other people out of context. For more information on the Enneagram, I encourage you to look into the Enneagram Institute.