THE JOURNEY OF THE FOOL THROUGH THE TAROT: DAY SIX - THE HIEROPHANT 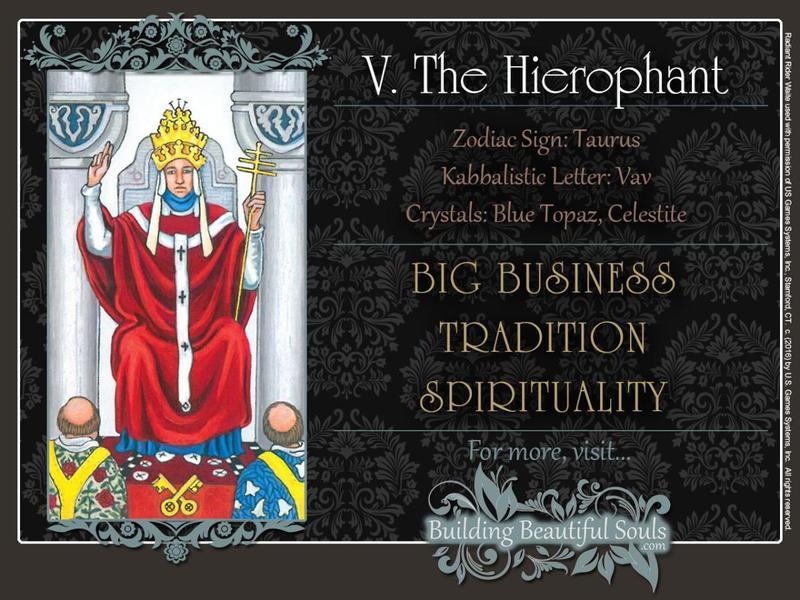 Eventually, the Fool ventures out of his home into the wider world.

He is exposed to the beliefs and traditions of his culture and begins his formal education.

The Hierophant represents the organized belief systems that begin to surround and inform the growing child.

A Hierophant is someone who interprets arcane knowledge and mysteries; we see a religious figure blessing two acolytes. Perhaps he is inducting them into church membership.

Although this image is religious, it is really a symbol for initiations of all kinds.

The child is trained in all the practices of his society and becomes part of a particular culture and worldview. He learns to identify with a group and discovers a sense of belonging. He enjoys learning the customs of his society and showing how well he can conform to them.

The Hierophant is the masculine counterpart to the High Priestess. He is also known as the Pope or the Teacher in other Tarot decks and is ruled by Taurus.

The Hierophant is a religious figure sitting between two pillars of a sacred temple – though this temple differs from the one in which the High Priestess sits.

He wears three robes – red, blue and white – and a three-tiered crown, both representing the three worlds over which he rules (the conscious, sub-conscious and super-conscious).

In his left hand, he holds the Papal Cross, a triple sceptre that signifies his religious status. He raises his right hand in a religious blessing, with two fingers pointing towards Heaven and two towards Earth. Before him kneel two followers.

The Hierophant’s task is to pass down his spiritual wisdom and initiate the two into the church so they can take up their appointed roles. This imagery speaks to a shared group identity and a rite of passage to enter the next level. The crossed keys at the Hierophant’s feet represent the balance between the conscious and subconscious minds and the unlocking of mysteries, which only he can teach.

The Hierophant card represents an established set of spiritual values and beliefs and is often correlated with religion and other formal doctrines.

Before you can discover your own belief systems and make your own choices (as associated with the next card, the Lovers), the Hierophant encourages you to learn the fundamental principles from a trusted source.

Work with a teacher, mentor, or guide to teach you about spiritual values and beliefs in a structured way. He may be an authority or a kind and generous mentor who nurtures your spiritual awareness and helps you access the Divine by understanding the traditions and core principles.

You may also undertake a period of formal study as you delve into a subject that has been widely explored and documented.

If you have already mastered a particular field of study, you may be taking on the role of teacher and mentor to others.

In this position, you honour and acknowledge your responsibility to share your knowledge in a structured way, one that respects the age-old traditions.

The Hierophant‘s arrival suggests you are following convention and staying within the bounds of a ‘tried and tested’ model.

You are not yet willing to go out on a limb or offer any new and innovative ideas. Instead, you adhere to the key principles and rules that you know will lead to a successful result.

The Hierophant may call you to honour family traditions or sacred rituals that sit neglected.

You are being asked to commit to spiritual practice in its most wholesome form – no customisation, no adaptation, no bending the rules.

If you have been lacking ritual and tradition, create a regular practice such as daily prayer or saying grace before a meal. Consider exploring your spiritual or religious heritage; so seek like-minded people to remain encouraged upon your spiritual journey towards enlightenment...

Numerology Of The Card:

The Hierophant is card number 5.  If you were going to the limit the meaning of this number to one word, it would be Change!  It's all about freedom of ideas and endless curiosity - someone eager to see what's next in life.  This number also likes the company of others very much, as it can learn so much about the positive changes they make might create for themselves.

Astrology Of The Card:

Taurus, a sign of determination and faith, a stable and loyal energy that displays great wisdom and knowledge.  It is  realiable, and very much values peace.  However, this sign can also be a bit rigid in how it sees things.  This matches the Hierophant's duality message of either sticking with or bucking tradition.