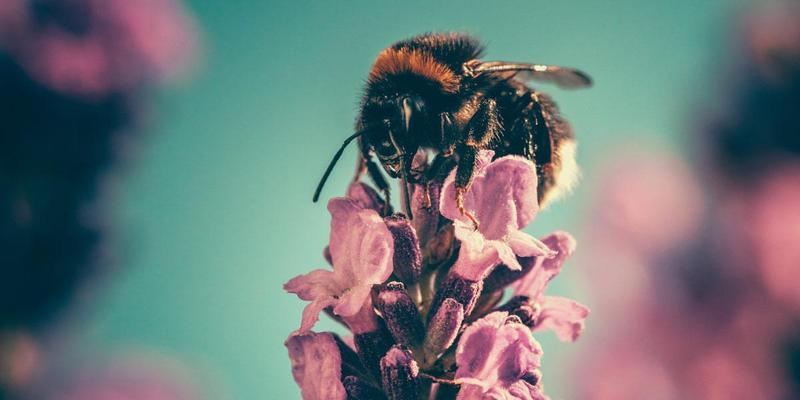 Two bee species in Canada have begun using plastic waste to build their nests, hinting at the extent of plastic pollution as well as nature's limited ability to adapt.

Plastic is piling up in ecosystems all over the world, not just oceans and lakes. Its harmful effects on wildlife have been widely documented, but a few animals — like bowerbirds and hermit crabs — are doing what they can to recycle it. And according to a new study, wild bees in Canada have joined the effort, using bits of plastic waste to build their nests.

These tiny insects can't recycle nearly enough plastic to put a significant dent in the problem, but their resourceful use of polyurethane and polyethylene is still a rare, encouraging example of nature making the best of manmade plastic pollution.

"Plastic waste pervades the global landscape," the study's authors write in the journal Ecosphere. "Although adverse impacts on both species and ecosystems have been documented, there are few observations of behavioral flexibility and adaptation in species, especially insects, to increasingly plastic-rich environments."

The researchers found two species of leafcutter bees incorporating plastic into their nests, each bringing home varieties that mimic the natural materials they traditionally use. Leafcutter bees don't build big colonies or store honey like honeybees, opting instead for small nests in underground holes, tree cavities or crevices in buildings.

One of the bees they studied, the alfalfa leafcutter, normally bites off pieces of leaves and flowers to make its nests. But the researchers found that three of eight brood cells contained fragments of polyethylene plastic bags, replacing 23 percent of the cut leaves in each cell on average. "All pieces were of the same white glossy color and 'plastic bag' consistency," the researchers report, "and thus presumably from the same source."

While they don't make honey, alfalfa leafcutter bees still make money for U.S. and Canadian farmers by pollinating crops including alfalfa, carrots, canola and melons. The Eurasian insects were introduced to North Amerca in the 1930s for that purpose, and they've since become feral, joining the continent's many native species of leafcutter bees.

The researchers also examined a second bee, the native American Megachile campanulae, which normally gathers resins and saps from trees to build its nests. Along with those natural nest materials, the species was found using polyurethane sealants in two of seven brood cells. These sealants are common on exteriors of buildings, but since they were surrounded by natural resins in M. campanulae nests, the researchers say bees may be using them incidentally and not due to a lack of natural resin options.

"It is interesting to note that in both bee species, the type of plastic used structurally reflects the native nesting material," the researchers added, "suggesting that nesting material structure is more important than chemical or other innate traits of the material."

Plastic can have both advantages and disadvantages in bees' nests, the study suggests. The bees that used bits of plastic bags didn't suffer any parasite outbreaks, for example, echoing a 1970 study of alfalfa leafcutters that nested inside plastic drinking straws. Those bees were never attacked by parasitic wasps, which were unable to sting through the plastic, but up to 90 percent of their brood still died because the plastic didn't let enough moisture escape, encouraging the growth of dangerous mold.

The plastic bags also didn't stick together as well as leaves do, the researchers note, and easily flaked off when they were inspected. But the bees took steps to minimize this structural deficiency, locating their plastic pieces only near the end of a series of brood cells. Because of this, and the blending of manmade with natural materials, "bee naivete does not appear to be the cause for the use of plastic," the study suggests.

It's still unclear why exactly leafcutter bees are using plastic, but as non-biodegradable materials continue piling up in nature, this kind of behavior could become increasingly important. "Although perhaps incidentally collected," the researchers write, "the novel use of plastics in the nests of bees could reflect ecologically adaptive traits necessary for survival in an increasingly human-dominated environment."