Utnapishtim And The Babylonian Flood Story 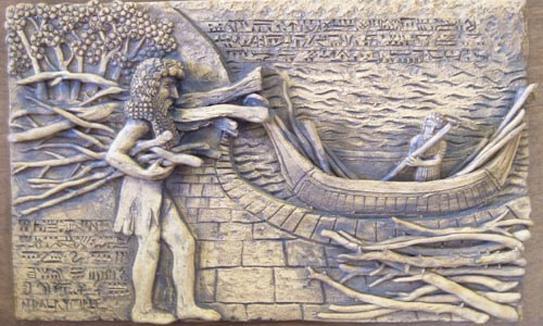 The ancient story of the great Flood has been re-told world-wide. We find accounts of the event among many ancient cultures all across the world. They all have myths and legends describing a time in the distant past when a horrifying Deluge wiped almost all life on Earth.

The story of Noah’s Ark is not just a Biblical story. Noah was known under a different name in India, among ancient Egyptians and Native Americans, just to mention a few cultures.

Memories of an antediluvian (pre-flood) period were preserved throughout Mesopotamia: The Sumerian King List includes antediluvian kings, and reliefs of antediluvian sages known as apkallu, winged and bird-headed creatures lined the walls of Assyrian palaces and remain one of the most iconic forms of Mesopotamian art to this day.

The Chaldean Flood Tablets from the city of Ur in what is now Southern Iraq contain a story that describes how the Bablylonian god Enlil had been bothered by the incessant noise generated by humans. To punish people he sends a Deluge to wipe out life on the planet.

The Sumerian god Enki, later known as Ea in Akkadian and Babylonian mythology went against the decision of the rest of the gods and ordered Utnapishtim to abandon his worldly possessions and create a huge ship to be called The Preserver of Life.

The ship was made of solid timber, so that the rays of Shamash (the Sun) would not shine in, and of equal dimensions in length and width. God Enki assisted with the design and construction of The Preserver of Life. The building of the ship took five days. The ship’s interior had seven floors, each floor divided into 9 sections, finishing the ark fully on the seventh day.

Knowing that the oncoming flood would wipe out all life on Earth, Utnapishtim was told to quickly take his wife, relatives, some of the villagers, animals along with various grains and seeds and board the ship. The entrance to the ship was sealed once everyone had boarded it.

Utnapishtim spent 12 days on The Preserver of Life. When he finally felt it was safe to open the hatch, he saw the slopes of Mount Nisir, supposedly the mountain known today as Pir Omar near the city Sulaymaniyah in Iraqi Kurdistan. Researchers have speculated the name may mean “Mount of Salvation”.

He waited seven days before he sent a dove out to see if the water had receded, but the dove could not find anything but water and returned. Utnapishtim repeated the procedure. Next time he sent out a swallow, and just as before, it returned, having found nothing. Finally, Utnapishtim sent out a raven, and the raven saw that the waters had receded, so it circled around, but did not return. Utnapishtim then set all the animals free and made a sacrifice to the gods.

by Message to Eagle