For 157 years, archaeologists, religious scholars, anthropologist, politicians, scientists, and historians–everyone except Native Americans–have attempted to show that the two stones and one little cup David Wyrick discovered in a burial mound in Ohio, were forgeries.

If the stones were authentic, then our theories about the peopling of the world and manifest destiny were wrong. So, there was, and still is, a lot at stake.

Wyrick was a printer/surveyor by trade living in Newark, Ohio, USA in the mid-1800s. Whenever time provided, he and his son would travel the mile or so southwest of city to the ancient mounds and dig into the burial grounds for native artifacts. One June day they came across a wedge-shaped stone in a circular depression, common in the ancient earthworks. It was six inches (15 cm) long, three inches (7.6 cm) in its broadest part, and half an inch (1.2 cm) in diameter, and tapered to a point.

What was odd about this stone was that it had Hebrew inscriptions on all four sides; _Melech Eretz_- King Of The Earth; _Toras Hashem_- The Law Of The Lord D”var Hashem - The Word Of The Lordand Kodesh Kodashim - Holy Of Holies. They called it the Keystone due to its distinctive form. 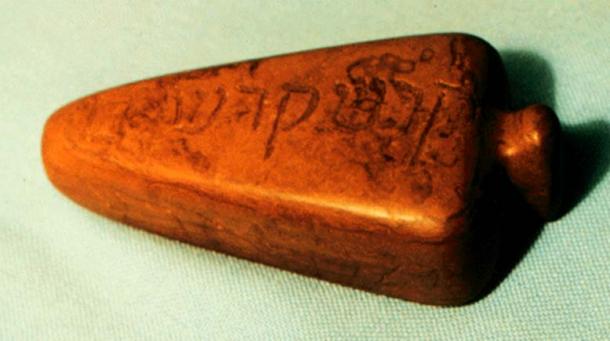 No record was kept of the exact location it was found, what direction it was pointing, or when it had been discovered in a tomb. The analysis of archaeology at the time was in its infancy and not many treasure seekers were maintaining comprehensive records of their own discoveries.

Rod or Staff of God?

The rock looks like a spearhead, or the tip of a rod or staff. Moses and his brother Aaron both had staffs during their important milestones. The staff was called the Rod or Staff of God in Moses” case and Aaron”s Rod for Moses” brothers. It”s written in Hebrews 9:4 that Aaron”s Rod was kept in the Ark of the Covenant.

Finding the keystone took Wyrick and his friends to the next level in treasure hunting. Five months later he came across 12 (some say 15) small burials ordered in a little circle with one big burial site in the middle, in a site named Jackson Town Stone Mound. 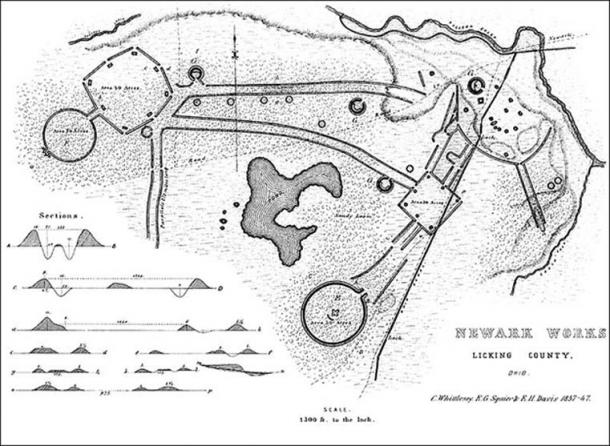 The site where the items were found is known asThe Newark Earthworks, Newark, Ohio, USA. 19th-century plan of the Works ( Public Domain )

The site, a pyramid-shaped mound, 50 feet (15 meters) high and 200 feet (61 meters) wide, had been excavated before, in fact over 15,000 wagon-loads of rock had been removed between 1831 and 1832. The material was transported and utilized to construct the Ohio and Erie canal. At the base level the remains of a wooden (oak) trough or coffin (radiocarbon dated Cal AD-70 to Cal AD-230 with a 95 percent probability) with some human remains were still visible.

Wyrick made a decision to dig below and deeper at this site and discovered a little sandstone box, 18 inches (46 cm) long and 12 inches (30 cm) wide, that was under the wooden item and beneath a layer of clay which had been disturbed. The sandstone case was cemented shut. One of Wyrick”s men found a small hole in the base of this case and blew into it and the case opened. They discovered a little limestone slab, six and 7⁄8 inches (17.5 cm) long, one and 5⁄8 inches (four cm) thick, and two and 7⁄8 inches (seven cm) wide, perfectly encased in the little sandstone box.

On one side of this limestone slab was a male human body with the title Moshe (Moses) in Hebrew carved above it. The figure was dressed in robes and wearing a turban. The remaining part of the rock was completely covered in Hebrew characters, which have been interpreted as a reproduction of the Ten Commandments, but not as we think of them now. Wyrick known as the limestone slab”The Decalogue Stone”.

The Decalogue Stone and the Ark

I believe a better title may be the “Ark of the Covenant”, though it isn”t incased in gold, has just one tablet instead of two, and doesn”t meet the dimensions of the Ark, as described in the Bible. However, it does include a written testimony in ancient Hebrew of the ten commandments, carved in stone, sealed in a box and buried beside an ancient pyramid.

It might have taken a fairly good stone mason to divide a piece of sandstone in half, chisel out the interior to maintain the precise measurements of the Decalogue rock, then carve the male figure on a piece of limestone, then chisel the ten commandments in Hebrew all across the rock, cement it closed, and then bury it 12 feet (3.6 meters) deep beneath a tomb site back in 1860. I believe when Wyrick and his staff were hoping to get publicity for some reason they would have come up with better names for the stones.

What Can the Keystone Unlock?

Historians point to the fact that one of Wyrick”s helpers, John Nicol, the local dentist, had been implicated in a hoax concerning two holy stones two years after Wyrick death. Nicol said he implanted the rocks on Wilson”s Farm east of city to discredit Wyrick”s previous discoveries. That is one reason why the stones are considered forgeries and everybody questions their credibility. Wyrick committed suicide in 1864, four decades after his discoveries in age 56, a broken man.

Two, eight-square plumb bobs were found with the Decalogue Stone. They are hardly ever mentioned and, at the present time, are lost. Ancient civilizations used plumb bobs to build the pyramids, locate true north, south, east, and west, locate the summer and winter solstices, in addition to the equinox and lunar cycles.

A plumb bob was the only clue the builders of the Great Pyramid left us inside one of the shafts leading into the Queen”s room (found in 1872). Each of the measurements done at the mounds of Ohio, were done in Chaco Canyon in southern New Mexico, but over a significantly greater distance.

Among Wyrick”s employees found a little sandstone cup exactly the same day they found the Decalogue stone. I am aware of no other sandstone cup located at a Native American site. Gourds and ceramic ladles, bowls or canteens were utilized for cups. Again, no record of where it had been discovered was recorded by the group. 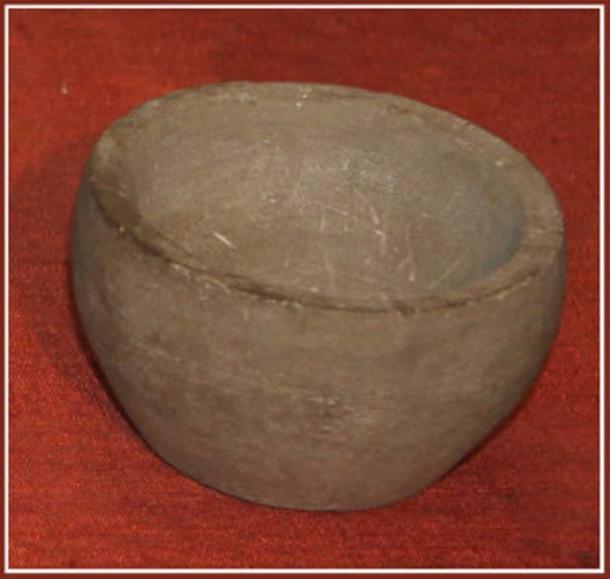 Could it be the cup used at the last supper? It is unknown how to prove this, but when there was some way to find where the people who were buried with the cup came from, we may have the ability to pinpoint a location of its first source.

In 2008, Dr. Shlush gathered the DNA from the remains of the Hopewell mound builders near Newark, Ohio. He found a new string of DNA called X2A, which he concluded, was only found in one other location in the world, the Hills of Galilee, in Israel.

_There is no credible archaeological or genetic evidence to suggest that any Old World peoples migrated to the Americas after the initial incursion from Siberia prior to the tentative forays of the Norse beginning at around 1000 CE other than limited contacts between Siberia and the American arctic._- Skeptical Inquirer Volume 36. 1 Jan. 2012

I believe there is credible evidence: the Hopi Creation Story. Frank Waters lived with the Hopi for three years starting in 1963, working on the Book of the Hopi. He interviewed over 30 Hopi elders and the first thing the elders wanted to tell him was their creation story, where we all came from.

The narrative begins by stating that four races of man had been created equal in exactly the same time (after the ice caps melted and there was a great flooding ) and the same location, (Egypt). Different guardians taught each race distinct languages, religions, customs and spread them around the planet. The Hopi recall crossing a massive ocean (the Pacific) on little wooden rafts constantly traveling east and landing on the west side of this continent (Monte Verde, Chile). Their protector, called Masaw, was awaiting them and guided them to journey north for their permanent home, where they reside to this day. It is thought that he told them that the people coming down from the north, much later across the land bridge, weren”t to be trusted (the Navajo and Apache?). Five or six other tribes might have arrived at the Americas from the east at this time across the Atlantic Ocean.

Rays of the Absolute (the Legacy of Sri Nisargadatta Maharaj)

In 2006 Stephen Wolinsky proposed the idea of traveling to…

“Our work is therefore historically authentic; the rediscovery of the Sumerian Tradition.”

“Lincoln’s researches have undoubtedly illumined certain phases of an ancient myth-cycle intimately associated with the Typhonian Current. They…

Heaven may refer to the physical heavens, the Earths atmosphere, the solar system or the seemingly endless expanse of the universe beyond, though it is generally spoken of as a plane of existence (sometimes held to exist in our own universe) in religions …

Rays of the Absolute (the Legacy of Sri Nisargadatta Maharaj)

In 2006 Stephen Wolinsky proposed the idea of traveling to…

“Our work is therefore historically authentic; the rediscovery of the Sumerian Tradition.”

“Lincoln’s researches have undoubtedly illumined certain phases of an ancient myth-cycle intimately associated with the Typhonian Current. They…